What are the different types of helices in protein secondary structures and how do they differ?

What are the different types of helices in protein secondary structures and how are they differentiated?

In the DSSP docs, types of helices mentioned are: Alpha-Helix, Helix-3, and Helix-5.

In the STRIDE docs, types of helices mentioned are: Alpha-Helix, 3-10 Helix, PI-Helix.

Why does DSSP have Helix-3 and Helix-5, while STRIDE has 3-10 Helix and PI-Helix - are they different expressions for the same thing?

This DSSP page makes it clear that:

The α-helix is described in every biochemistry text book and widely on the web. It has 3.6 residues per helical turn and has 13 atoms in the ring formed by the hydrogen bond and so can also be called a 3.6-13 helix.

The 3-10 helix is less common than the α-helix, but is still widespread. By analogy with the alternative nomenclature just described for the α-helix, it has 3 residues per helical turn in a 10 atom ring.

The π-helix is even less common. It is a wider helix with 4.6 residues per turn.

A comparison of the three can be found in this proteopedia article, from which I have taken the illustration below. 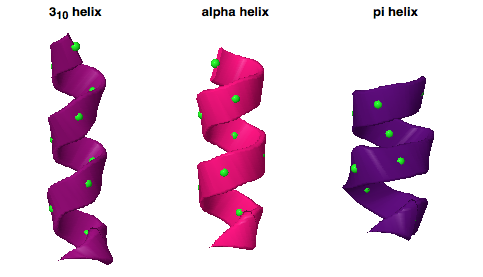 There is also the collagen triple-helix, but that is specific to collagen, whereas the others are general examples of secondary structure found in many proteins.

There is no such thing as a “full scientific name” in this area of molecular biology. Names tend to get standardized by unofficial agreement when ambiguity becomes a problem. Helices other than the α-helix are not very well known, but the terms 3-10 helix and π-helix are certainly more common than Helix-3 and Helix-5, which I suspect may have been a computational convenience. However, an internet search indicates that for scientific journals 310-helix is generally preferred to 3-10 helix or 3(10)-helix, these latter perhaps reflecting work in a plain text environment or the word-processing or HTML limitations of writers.

16
Can two protein secondary structures "overlap" in the PDB?
2
Which protein complex is composed of the greatest number of different kinds of proteins, and how many types are involved?
2
Can VMD change its cartoon representation for secondary structure according to trajectories?
1
Can the knowledge about torsion angles alone be sufficient for specifying secondary structures of protein?
4
Why do large, aromatic residues prefer beta-pleated sheets?
2
Why are there so many carbonic anhydrase structures in the Protein Data Bank?