Is reverse senescence/“anti-aging” actually scientifically possible among humans yet?

Basically I've heard of experimental drugs called senoyltics that are believed to (and have actually done so) have the ability to truly reverse aging at the cellular level and/or aging damage of skin and etc.

I am very intrigued and want to know if this is feasible for humans yet -- or any such breakthroughs. I really want my skin's genetic quality to be enhanced, but reversing aging damage by genes will suffice.

So skin aside, in general, is reverse senescence (with or without senolytics) anywhere near possible to reach human success? I've heard of labs and etc. working on this for testing, but nothing more.

My question is basically: is it possible? Are we really in the near future to reversing aging in humans?

As a note: I don't mean "anti-aging" as in preventing death -- more so as in making yourself younger in a myriad of ways, such as by appearance and physical ability (like heart; brain; skin texture/youth; etc.)

For example, Boccardi & Herbig (2012): describe a mouse study in which they used telomerase gene therapy to improve the healthspan and lifespan of mice by up to 24%.

As far as I know, we have no successful human trials of similar therapies that have targeted and succeeded at "decreasing the age" of humans.

Due to the inability for DNA polymerase to replace RNA primers on the end of linear strands of eukaryotic DNA during DNA replication, ~50-100 base pairs are removed from the daughter strand from each replication event.

The "junk" (i.e., non-coding) telomere sequences (which could repeat 1000s of times) provide buffers against losing more valuable DNA when this happens. Eventually though, the telomeres run out, and replication events could lead to loss of coding regions of DNA...

As we age, telomeres in most of our tissues progressively become shorter and therefore likely contribute to the failure of our organs and tissues observed in old age. Supporting this are data demonstrating that healthy lifespan is positively correlated with longer telomeres in humans, and patients suffering from age‐related diseases and premature aging syndromes display shorter telomeres compared to healthy individuals (Zhu et al, 2011). 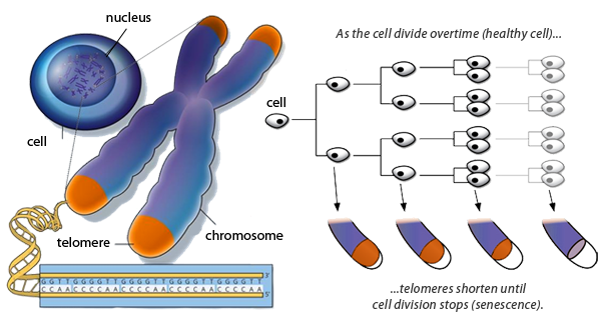 The enzyme, telomerase can replace these telomeres, but telomerase is really only active in stem cells and white blood cells, so most adult cells lack this regeneration ability.

This is where telomerase gene therapy comes into play. 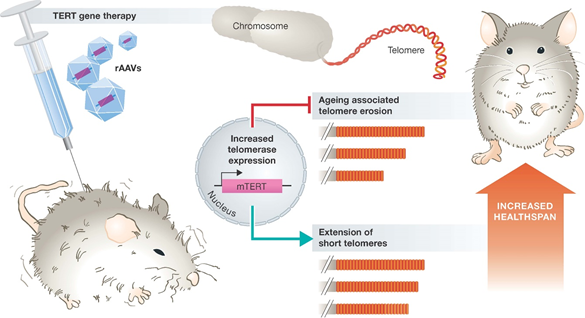 As Boccardi & Herbig (2012) note, however, applied human studies are still a thing of the future.

While these studies provide a proof‐of‐principle that telomerase gene therapy is a feasible and generally safe approach to improve healthspan and treat disorders associated with short telomeres, a clinical application in humans is likely still some time away.

Not within the next two decades, at least (assuming you meant nearly total reversal of the effects of physiological aging). Any further than that is impossible to predict, since we are likely only a few breakthroughs away at this point (however, with extremely bad luck, these could take centuries to achieve, since presumably no scientist knows the 'optimal route' to developing these types of therapies at this point). But it is certainly possible from a scientific point of view.

While this is slightly off-topic, since you seem particularly concerned with skin aging, I would suggest protecting the stem cells of the skin from mutagens. These include UV radiation (which comes not only from the sun, but also from blue sky), background radiation (which depends on altitude and geographic location (inc. North American examples)(similar maps for Europe)) as well as lipid-soluble volatile genotoxins such as benzene and PAHs, which arise from the combustion of organic matter (e.g. wood burning, smoking, conventional BBQ grills, car exhaust).

Other factors that affect aging of the skin are the factors that degrade collagen, including UV radiation (again) as well as high blood sugar, which in turn triggers the formation of advanced glycation end-products that reduce collagen elasticity. One more factor associated with skin aging is particulate air pollution (Ding et al. 2017), which damages the DNA as well as other cellular structures by inducing oxidative stress (Piao et al. 2018). Particulates also often have genotoxic compounds adsorbed onto their surface (see e.g. Jia et al. 2017)).

Currently, the most effective way to prevent skin aging is to minimize exposure to the factors mentioned above. Many of these factors also promote certain other processes associated with aging (the accumulation of DNA damage causes cancer and accelerates stem cell aging (Rossi et al. 2007), whereas exposure to particulates is expected to contribute to the development of brain diseases such as Alzheimer's (Maher et al. 2016))

I would expect DNA mutations of the skin to be relatively easy to fix, though. For example, the skin is relatively accessible, so stem cell therapy could certainly work, as could a Cas9-based therapy used to strategically fix specific key mutations to prevent senescence. Presumably research to this end will be conducted relatively soon, now that Cas9 has gained popularity in the scientific community.

Keeping in mind that this was a very small, not especially well-controlled preliminary/exploratory study. Because life expectancy was increased by ~2.5 years - or got ~2.5 years younger biologically, depending on how you look at - it is the reason that this study is being talked about at all.

In the TRIIM study 9 men, ages 51-65, first took hGH alone (0.015 mg/kg, or ~3 IU for a person weighing 70 kg) 3-4 times per week for one week and then added DHEA (50 mg) the next week, similar to Fahy’s n=1. The week after that, the same doses of hGH and DHEA were combined with metformin (500 mg). At the start of the fourth week, the doses were individualized based on each participant’s particular responses. (To put the hGH dosing into context, while it’s individualized, athletes using it for performance enhancement may take 10-25 IU 3-4 times a week and “longevity” clinics may prescribe somewhere in the ballpark of 1-2 IU/day.) The goal of this titration approach was to maximize IGF-1 and minimize insulin by varying each of the hormones and drugs.

The investigators reported a mean “epigenetic age” approximately 1.5 years less than baseline after the 1-year intervention. In other words, their epigenetic age got 1.5 years younger while their chronological age obviously went up another year (total 2.5 years taken off).

On a side note, after 1-year of treatment, there was “highly significant” evidence of restoration of thymic functional mass along with improvements in age-related immunological parameters, based on MRI imaging and favorable changes in monocytes and T-cell changes.

Also, reversal of epigenetic changes with OSK (part of Yamanaka factors) is very promising. This paper is worth reading - https://www.biorxiv.org/content/10.1101/710210v1

Not the answer you're looking for? Browse other questions tagged human-biology pharmacology senescence life dna-damage or ask your own question.