How does alcohol weaken heart muscles and why does it increase blood pressure both temporarily and long term? Is the long term effect due to increase of plaque or is it due to other effects?

The actual mechanism through which alcohol increases blood pressure is poorly understood (1,2). However, there is a mountain of evidence that shows that there is a strong correlation between alcohol intake and hypertension (small, infrequent amounts may have positive effects whereas excessive consumption has very negative effects (3)).

Back to the underlying mechanisms however, there is a good paper by Kazim Husain, Rais A Ansari, and Leon Ferder, which presents all the possible mechanisms that may contribute to alcohol-induced hypertension. The core ideas are as follows: 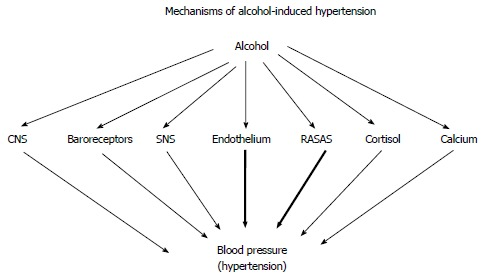 The serum levels of vasoactive substances such as renin-aldosterone have been reported to be affected by alcohol ingestion in vivo or ethanol in vitro.

Rats treated with ethanol showed constriction of blood vessels due to greater shifts in the binding of the calcium ion (Ca2+) in arterial and arteriolar smooth muscle cells causes increased sensitivity to endogenous vasoconstrictors.

Not the answer you're looking for? Browse other questions tagged pathology cardiology or ask your own question.