About embryonic and genetic evidence of evolution?

My question here is about evidence for evolution from Embryology and from Genetics.

Question 1 asks whether ontogeny recapitulates phylogeny. It is striking that the when observing e.g. human embryo development, the embryo seems to go through stages that its ancestral species would go through, but where those 'lower' species would terminate at a specific stage. In other words, embryonic development seems to recapitulate a species' evolutionary lineage. 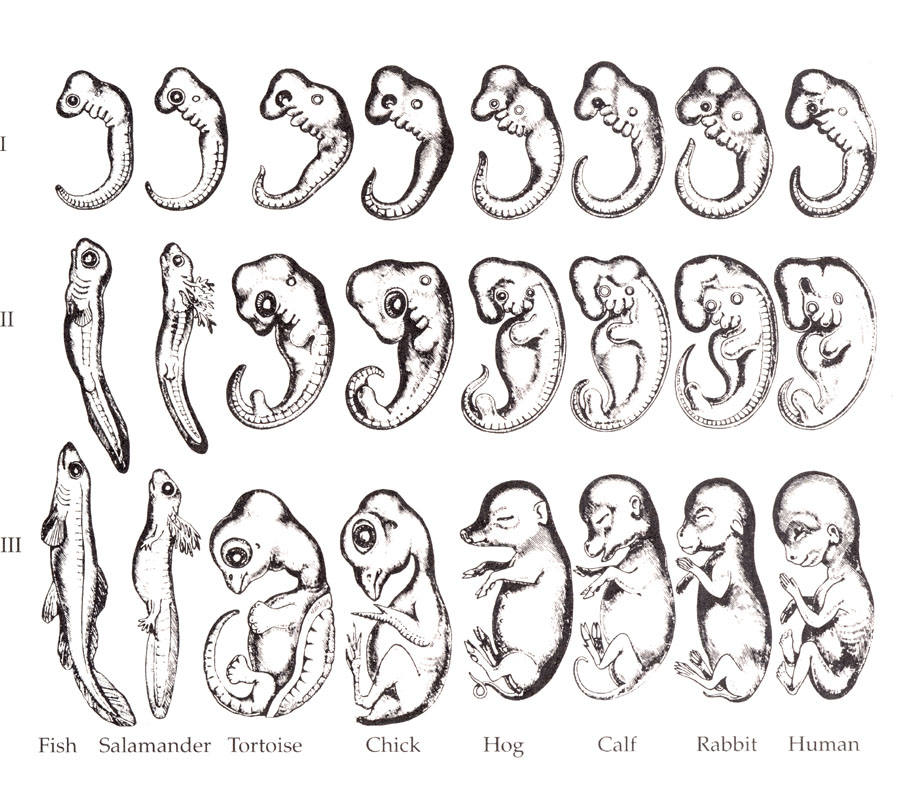 This is the recapitulation theory, which is outdated and incorrect, but a great example from the history of science. The most prominent of these was Ernst Haeckel's biogenetic law and the Meckel-Serres Conception. There were many problems with this, especially because they focused on noting similarities rather than differences, and several exceptions exist to the rule. They were not very scientific. It also incorrectly presumes that complex organisms have more predecessors. However, it is a compelling piece of evidence to elegantly show that evolution acts incrementally on existing embryological processes.

Question 2 asks whether there is evidence of ancestral DNA in our genome. The answer is yes. Where to begin? We share almost all of our genes with close relatives (e.g. chimpanzees and bonobos) and progressively fewer with more distant relatives. 50% of a banana’s genes (and indeed most other plants') can be found in the human genome. But remember, logically, that doesn't necessarily mean that 50% of human genes are found in bananas, though, because of the way divergence works. The human genome also contains a record of many viruses that have inserted themselves over tens of millions of years. Though they are not ancestors, they have been added 'horizontally' as opposed to the 'vertically' that ancestor DNA is modified over a species lineage.

It's very possible to answer your questions from many, many different angles, and present countless pieces of evidence in favor, but I think this should suffice.

1) Evolution acts incrementally on existing embryological processes -> the insight here is that organisms don't come out fully formed, they develop. When we say a gene, say, "codes for" a tail, it doesn't make a tail magically appear: its action happens during the organism's development, where it acts on the development process such that the adult organism will have a tail.

This means that when organisms change over time via evolution, the way these changes are actually implemented are as changes to an existing development process; obviously the development process isn't going to be reset each time. So for example, it might make sense that since snakes don't have limbs as adults, they should never have limbs at any point in their development because what would be the point? But they evolved as a variation on organisms that did have limbs, and whose embryological development included the development of limbs. Evolutionarily speaking there's little reason why you should change that by preventing the development of limbs at stage 0, as opposed to, say, halting their development at stage 10 and destroying the limb buds. Either way you end up with a limbless adult snake! On the other hand if you destroy the limbs at stage 10, you're hardly going to have them come back at stage 19. In other words, you can end up with a pattern of later evolutionary changes happening later in development on average even if the changes occur at a random point in development, simply because a change at one stage of development also changes the later stages, but keeps the earlier stages intact. So earlier stages are more likely to be unchanged on average, i.e. similar to how they were in the ancestors. In practice the changes don't happen randomly in the development process of course, which is one reason "ontogeny recapitulates phylogeny" actually has tons of exceptions. This textbook "Developmental Biology" has a cool companion site with a chapter that discusses the history of the idea. This Wikipedia page also discusses some evolution in the view of evolution and development, talking about the "hourglass model" vs the "funnel model". The funnel model is this idea that the earliest stages are most similar to ancestral forms (and thus similar between related species), but the hourglass model points out that actually there is one specific stage (the "phylotypic stage") that stays similar between species, but there are differences both in earlier and in later stages.

2) There is no such thing as "dormant" DNA. There is active DNA (that codes for genes, regulatory regions, etc) and non-functional DNA. Non-functional DNA can be a few mutations away from being functional, and thus become functional as a result of chance mutations, but "dormant" suggests regions of DNA that are deactivated with the intent of reactivating them in the future; this isn't a process that occurs in evolution, which has no such future-looking intent.

Now it is the case that a) all DNA is subject to mutation, and b) we have a whole lot of DNA, and the mutation rate is quite low. This means that a lot of DNA is indeed more or less the same as it was in our faraway ancestors. Having said that, non-functional DNA is less likely to remain the same than functional DNA is, because nothing prevents mutations to those parts from being passed down through the generations. The DNA sequences that are the most unchanged ("conserved") are those that are used in such basic functions of life that they evolved very early in the history of life, and any change to them kills the resulting organism, which means that natural selection will make sure they don't change, or change very little. Here is a paper "The Genetic Core of the Universal Ancestor" that looks at such DNA sequences that are the same in all organisms ("universally conserved") to infer what genes the common ancestor of all living things had.

Finally, while this does mean that humans share a lot of their genome with dinosaurs, those shared genes mostly come from the fact both humans and dinosaurs share genes with their common ancestor, which was one of the earliest reptiles. Dinosaurs are not ancestors to humans.

Mammals do have similar Embryos, but is it the case that for each species there is an embryonic development that occurs in earlier species, has such relationship been observed?

Technically, we do not observe much from the embryology from ancestral lineages. They don't exist anymore, so we can't make many observations from their embryology. The question is rather whether related lineages have similar embryogenesis.

Genetics is our main tool for inferring our phylogenetic trees. So, it makes more sense to ask whether other things match the genetics than the other way around. But yes, things match. Fossil records, ontogeny, phenotypic variation and genetics. Everything match to tell a similar story of the phylogenetic relationships among species.

13
Is there any evidence that a virus can modify human evolution
0
DNA adaptation in human life
15
Is there a biological mechanism for evolution encoded into our DNA?
9
How does Darwinian Evolution work?
4
What's the percentage similarity between human individuals (and other primates) when comparing only exons?
0
Are Males the main evolutionary tool for production of genetic variation necessary for evolution?