How do fatty acid and polyketide synthases handle the varying size of their substrates?

Polyketide synthesis involves six modules, each containing certain common constituent enzyme activities (KS, AT, KR) that are involved in extending the chain (see e.g. Dutta et al.(2014) ). The growing polyketide, attached to acyl carrier protein, is passed on from one module to the next.

An analagous situation is seen in the single Fatty Acid Synthase complex. How can the same enzymes in later modules recognize what is a structurally different intermediate? Surely this contradicts the idea of substrate specificity of enzymes.

Although the substrate is different at each stage of chain extension, the part involved in the reactions — and recognized by the enzyme — is the same. This is a common feature of polymerization reactions, whether the catalysis is by a single module (ribosomes, DNA polymerase) or multiple modules (polyketide and fatty acid synthesis).

This is illustrated by the modification made below to a part of Figure 1 of the paper cited in the question. An overlay in yellow has been made to indicate the common structural features of the polyketides of different length. 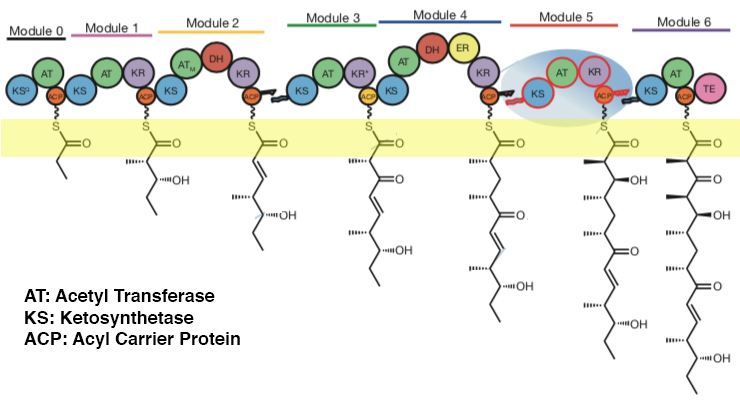 Of course, the rest of the chain may well interact with the enzymes, but as this is not at their active sites it can be in a less specific manner, perhaps in a ‘groove’ containing appropriate interating chemical groups.

The question of substrate specificity is not the point of interest in the paper on polyketide synthase where the focus is on the way the elongating substrate is passed from enzyme to enzyme and module to module (the resolution is also too low). It has, in any case, been addressed in previous work on mammalian fatty acyid synthase, where exactly the same single (dimeric) multidomain complex acts on each intermediate until the chain length is 16-18 C atoms. However the question of chain length is taken for granted and the discussion is about discrimination between chemically different intermediates. Thus in a 2008 paper by Maier et al. a substrate tunnel in the ketoacyl synthase (KS) module of the fatty acid synthase (mFAS) is compared with that in polyketide synthase (PKS):

“Despite the pronounced structural similarity between the KS domains of mFAS and PKS, the selectivity of FAS for saturated acyl chains can be explained by a considerable constriction at the base of the active site phosphopantetheine binding pocket leading into the large acyl chain substrate binding tunnel, which connects both active sites of the KS dimer (Fig. 4, A and B). A number of residues lining this narrow tunnel are highly conserved in mFAS but are substituted with smaller residues in all DEBS (6-deoxyerythronolide B synthase) PKS modules (Fig. 4B), resulting in a wider, more permissive tunnel in the KS of DEBS.”

It is important to think of substrate specificity in molecular terms — e.g. what part of the substrate binds to the enzyme and how specific has the binding to be. In this case the substrate is attached to the long phosphopantetheine chain of acyl carrier protein, so that recognition of that and the part of the fatty acid or polyketide attached to the sulphur may be enough to discriminate against ‘free’ extraneous molecules. And a tunnel is permissive as a binding site: if the chemistry and radius are right, there is no need for the whole of the tunnel to be occupied.

Tunnels of various types are found in other enzymes or organelles involved in elongating molecular ‘chains’, e.g. polypeptides and nucleic acids. The tunnel on the ribosome and that through which RNA or DNA passes has to accomodate chemical disparate molecules (four different bases, 20 different amino acids).

Not the answer you're looking for? Browse other questions tagged enzymes structural-biology or ask your own question.

8
How does one calculate the resolution of a crystal structure?
0
About molecules and their shape
5
What is the difference between a phosphotransferase, a phosphatase, a phosphorylase and a kinase?
2
How to find PDB id of an amino acid sequence
1
How can ionized amino acid form be important for the catalytic activity?
2
How do metal ions acting as enzyme cofactors “find” their respective enzymes?
6
Why are plants unable to take up Phosphorus directly in their organic form like Phytic Acid?