Is spiders building webs on plants an example of mutualism or commensalism?

In one section of the GED study book I'm looking through to prepare myself for exams, they define parasitism, mutualism, and commensalism, and give examples.

One of the examples they give for mutualism is ants living in an acacia tree. The ants get a home, and they defend the tree.

One of the examples they give for commensalism is a spider building a web on a plant.

Is this actually an example of commensalism? This seems more like mutualism to me. The spider benefits from being able to put its web somewhere, and the plant benefits from protection from bugs (as the spider's web will catch them).

Is this relationship an example of commensalism or mutualism?

You're thinking too broadly and rigidly about these concepts -- both commensalism and mutualism are types of interspecific interactions.

Commensalism is when one species in a given interaction is benefited while the other is neither benefited nor harmed. In a mutualistic interaction, both species benefit from their interaction with each other. 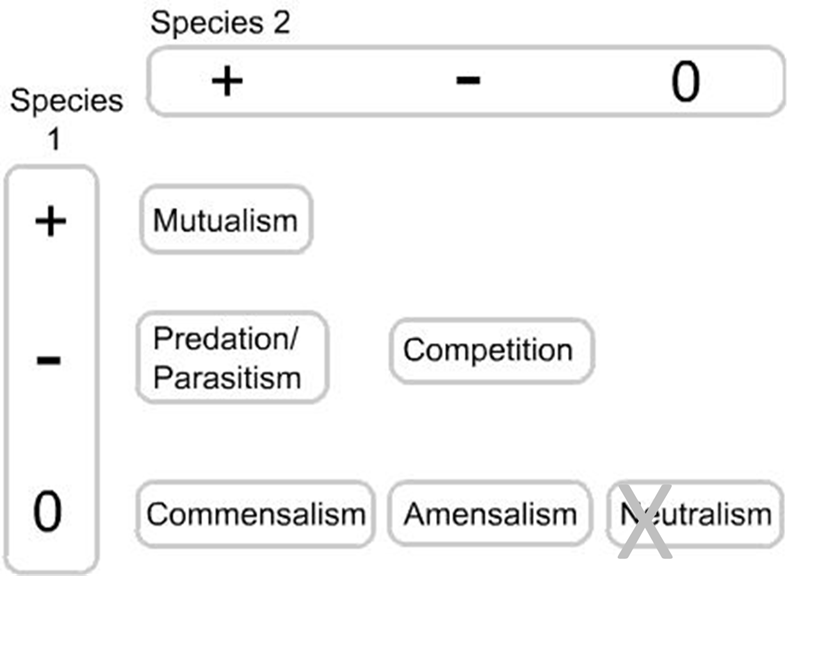 Like any interaction between two organisms, these interactions can vary between individuals. Although some species pairs will consistently undergo the same type of interaction (e.g., shark and prey -- predation), some groups of species may vary in their paired interactions. This variation may result from two different scenarios:

Put differently, commensalism, mutualism, etc. are not behavioral traits, but interactions, and so are dependent on not only the species involved but the circumstances as well.

Note: To further complicate things, each given interaction can be qualified in various ways. For example, from Wiley ELS:

For the scenario you laid out, the short answer is yes.

Like @theforestecologist pointed out, interactions can be complex and contingent.

Although, in the example you give, it can be easily tested: grow plants with spiders and without, and see if there is a difference in plant fitness. Fitness can be measured directly by looking at, for instance, the number and quality of seeds the plants in each group produces. But fitness can also be measured indirectly by looking at the amount of herbivory on the plants (e.g., scars), the number or area of leaves before and after the spider treatment, photosynthetic rates, etc.

If a fitness benefit can be demonstrated with both species involved, then it is considered a mutualism.

Not the answer you're looking for? Browse other questions tagged ecology terminology community-ecology symbiosis or ask your own question.

0
If a “parasite” is growing on a dead part of the host or on a completely dead host, does it still count as a parasite?

6
How different are these terms: Phylloclade, Phyllode, Cladophyll and Cladode?