Why do fruit flies go so close to large reservoirs of liquid when they are likely to fall in due to surface tension?

I had accidentally left out half a glass of red wine by the windowsill when I went to sleep. As anyone knows, if you do this with a window cracked you will get quite a few fruit flies near it in that time(region dependent obviously).

I noticed that many of them had simply fallen in as there was nearly nothing on the sides of the glass. What causes this behavior in a likely death scenario? Is it only exhibited during extreme hunger? Would this also not likely be an evolutionary cost or is that outweighed?

Although this is from a popsci article, a biologist says that fruit flies can normally land on liquids and take off from them thereafter:

However, simply leaving a shot glass full of fruit-vinegar will only serve to feed the flies. The surface tension of the liquid [Ed. note: You remember surface tension, right?] allows fruit flies to land on liquids but not drown.

To break the surface tension you’ll need a tiny bit of dish soap. Dish soaps contain surfactants, which are molecules with a head that likes water, and a tail that doesn’t. Because of this property, the surfactants tend to situate at the interface of air and water, forming molecular “cliques” that disrupt the surface tension of water.

By putting a tiny bit of dish soap on your finger, and touching it to the surface of the vinegar in the shot glass, you will add enough surfactant to break the surface tension. (Add too much and the molecules in the dish soap will alert the fruit flies to danger).

Now fruit flies will unknowingly attempt to land on the vinegar for a little sip, then, before they can react, will break through the surface tension and begin to drown.

So if this is true/confirmed, then they do have enough of an evolutionary adaptation to the [surface tension of the] usual liquids of their diet. Just not to [trace] dish-soap contaminated liquids.

And I can confirm from a peer-reviewed paper that dish soap is indeed used even in science trapping experiments:

The cup trap (figured by Beers et al. 2010) is a 946-ml clear plastic drinking cup with a clear plastic lid (Solo, Urbana, IL), with four 1-cm-diameter holes in the sides of the cup near the top. A drowning solution or drowning solution plus bait was placed within the cup. Forty grams of boric acid and 0.5-ml liquid dishwashing soap (Palmolive Pure and Clean Spring Fresh Dishwashing Soap; Colgate-Palmolive Company, New York, NY, USA) were added to a batch of 3.8 l of water or aqueous bait to make a drowning solution used in all traps. Boric acid served to inhibit microbial activity of baits and captured insects, and soap reduced surface tension to promote capture and submersion of trapped insects. For both types of traps and all treatments in all experiments, each trap contained either 300 ml of drowning solution or 300 ml of bait in drowning solution

0.5ml of soap to 3.8l of water is very little, but that's all it takes to drown the little flies. It seems entirely plausible to me to have this level of trace contamination on glasses that have been dishwashed.

And as a complementary survival mechanism, fruit flies can apparently survive 12 hours of drowning at room temperature (or more in lower temperature):

@Frieke may be on to something, namely that ethanol lowers the surface tension of the solution (with water) by itself, significantly. At 20-25 degrees C, pure water has a tension of about 72 mN/m. Adding 10-15% ethanol lowers that to about 47-42 mN/m. Also, the trapping science paper does mention that

Interestingly wine has substantially higher attractive effect than an equivalent ethanol solution though: 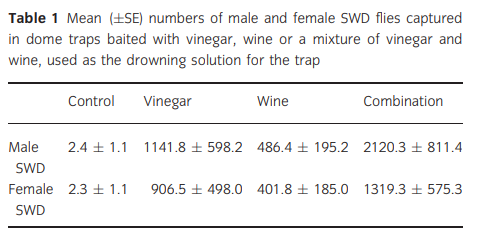 Wine is about half as effective a vinegar and about a quarter as effective as a combination of wine and vinegar. On the other hand, a 10% ethanol solution was 20-50 times less effective than alcohol 10% plus acetic acid 2%. So there's more to wine than ethanol that attracts the flies.

So the flies probably do avoid the higher alcohol concentrations... unless there's also vinegar.

Another paper finds that wine's surface tension is mostly determined by its alcohol content. 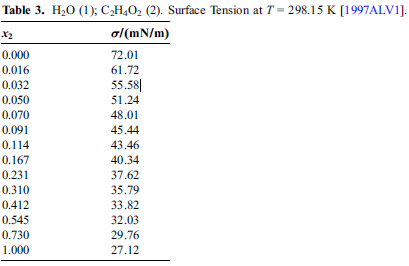 So probably just the fact that acetic acid is much more attractive to flies than ethanol is the only factor (other surfactants excluded). Perhaps they "confuse" a higher concentration of ethanol to a lower concentration of acetic acid, which they would be able to handle as far as surface tension goes.

Yet another source (actually quoted in the previous one, on the next page) gives even lower values for ethanol surface tension.

Apparently determining surface tension is a hard problem, both experimentally and theoretically. So I'm not sure we can properly compare figures reported in different sources. Alas no single experimenter has done both ethanol and acetic acid in the same paper/setup. But what was observed about their relative attractiveness to flies is probably sufficient...

And for ballpark comparisons, a similarly or lower surface tension as that of 10% ethanol (or acetic acid) i.e around 30-40mN/m can be obtained by a adding a few ppm (parts per million) of a surfactant, such as LAS or AE.

As indicated by their name, fruit flies can be found on fruits, where they prefer to lay their eggs. Since the larvae feed not on the fruit itself but on microorganisms found on rotting material, they will especially target overripe fruits. Therefore fruit flies have evolved to identify and respond to odors emitted from ripe fruits. Red wine similarly emits odors that are attractive for fruit flies. Since fermentation is a form of controlled rotting (in both cases material is decomposed by microorganisms), the resulting compounds can be similar, which includes ethanol and 2-phenylethanol.

So, fruit flies are attracted to the smell of wine, that's why they approach the glass. Due to their small size and the surface tension, they should be able to land on water without drowning. But wine isn't water. With an ethanol concentration of 12% we see a reduction in surface tension from ~72mN/m to ~45mN/m, which is comparable to adding some detergents. 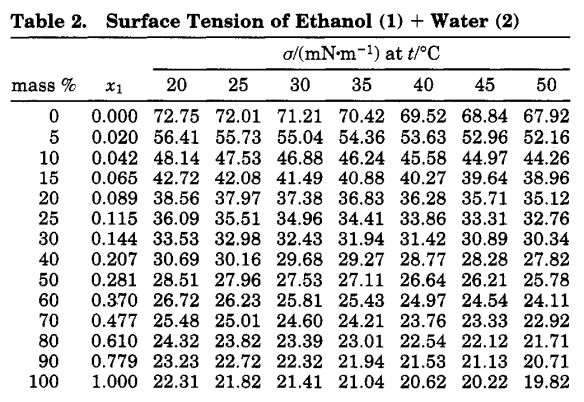 This explains, why the flies are not able to escape and drown after landing. I would nevertheless argue, that the selection pressure isn't strong enough for an evolutionary adaptation. In their natural environment, they usually would not encounter large bodies of liquid which they are attracted to and which are not able to hold their weight.

In evolution and behavior we have to consider the entire species. While a few unlucky animals will die in wine glasses, most other flies will not. For them being attracted to the smell of overripe fruit and ethanol is an advantage. It's a cost and benefit calculation. For the species, the costs of a few individuals dying is outweighed by the enormous benefit of finding a good place to raise their offspring (laying eggs into rotting fruits). Therefore, the attraction to these smells and approach are positively selected for, even though this results in death in wine for some members of the species.

Watching fruit flies at a trap, you see that mostly flies land on the container rather than on the liquid, indicating that they already avoid touching down on liquid. On the other hand, fruit flies don't seem to be very acrobatic, with a part of their landings being "crash landings". Hence, some of these flies might just accidentally end up in the liquid or by walking down to the edge of the liquid and being caught up by it when touching it. Even though I couldn't find hard data on this, "landing on liquid reservoirs" doesn't seem to be necessarily a strong behavior in fruit flies, that evolution could negatively select for.

Not the answer you're looking for? Browse other questions tagged evolution zoology physiology behaviour or ask your own question.

94
Why do some bad traits evolve, and good ones don't?

25
Why are flies not scared when landing on a monitor with changing graphics?
11
Why do sparrows jump instead of walk when they are not flying?
3
Why do cats meow when they are adults?
1
Why do blobfish become bloated when they are brought to the surface?