What is the frequency of AUG near-cognates (as start codon) in ‘Leaderless’ mRNA?

In typical bacteria that use SD-dependent translation initiation, the AUG start codon may sometimes be replaced by near-cognates (GUG, UUG, etc.). The frequency of these near-cognates is somewhat known: 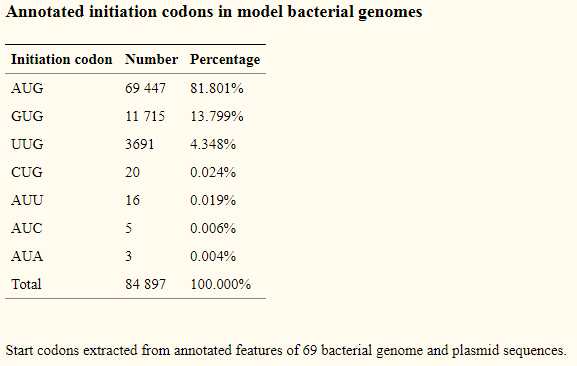 But SD (as a mechanism) is not that universal either... even in bacteria:

The mechanism of initiation on bacterial mRNAs lacking SD motifs is still unclear, although it is known that these mRNAs tend to have little secondary structure in their 5′UTR. ‘Leaderless’ mRNAs, that is, mRNAs lacking entirely a 5′ UTR, are a special case of SD-less mRNAs. They are widespread in a variety of bacteria. Leaderless mRNAs bind directly to 30S or 70S ribosomes with the aid of IF2 and initiator tRNA. The presence of an AUG initiation codon is mandatory for initiation on a leaderless mRNA.

So this begs an immediate question from me: are AUG-near cognates less common in ‘Leaderless’ mRNAs? (I expect that to be the case in order to compensate for the lower initiation efficiency in the absence of SD.) Or if this is a silly hypothesis for some reason, what is known about the frequency of AUG near-cognates in ‘Leaderless’ mRNAs?

8
The GUG start codon in E. coli: identity of initiating tRNA and efficiency of translation
11
Why is AUG the initiation codon?
6
Why is the DNA codon table “equal” to the RNA codon table
3
What physical force attracts the anti-codon on tRNA to the codon on mRNA during translation?
5
How does DNA codon (5`-3`) convert to mRNA?
2
Relationship between the ambiguity (wobble) at codon position 3 in elongation and codon position 1 in initiation
3
The shape of mRNA
5
From which end of mRNA does transcription start?