What is "beto carotene" and how can it turn lakes pink?

The BBC News article Pink lake in Australia attracts and delights tourists describes an artificial salt lake in Westgate Park, Melbourne, Australia that tuns pink around February and then in "late Autumn, until cooler temperatures restore it back to blue."

I am not sure about the autumn part as it's in the southern hemisphere, but my question is about the color change. 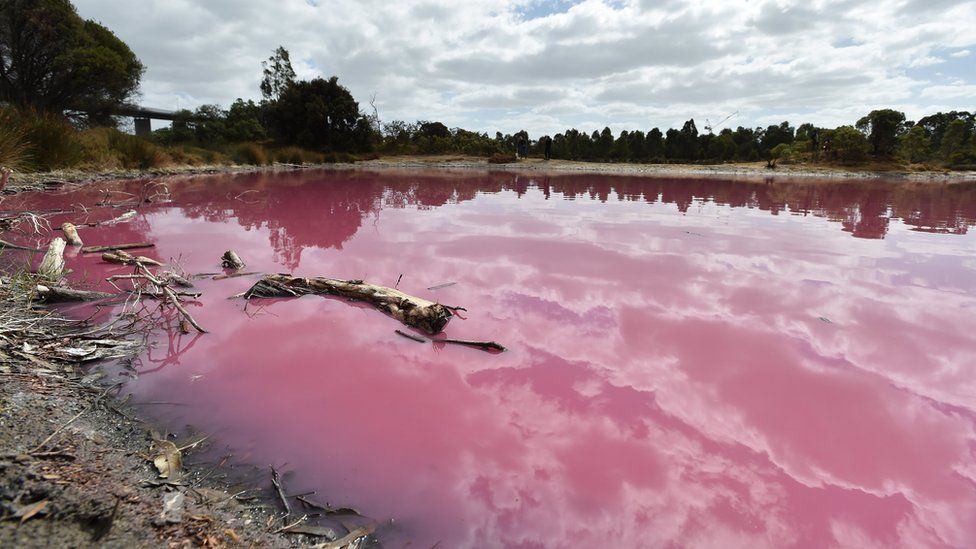 In those conditions, the lake's algae produces a red pigment called beto carotene 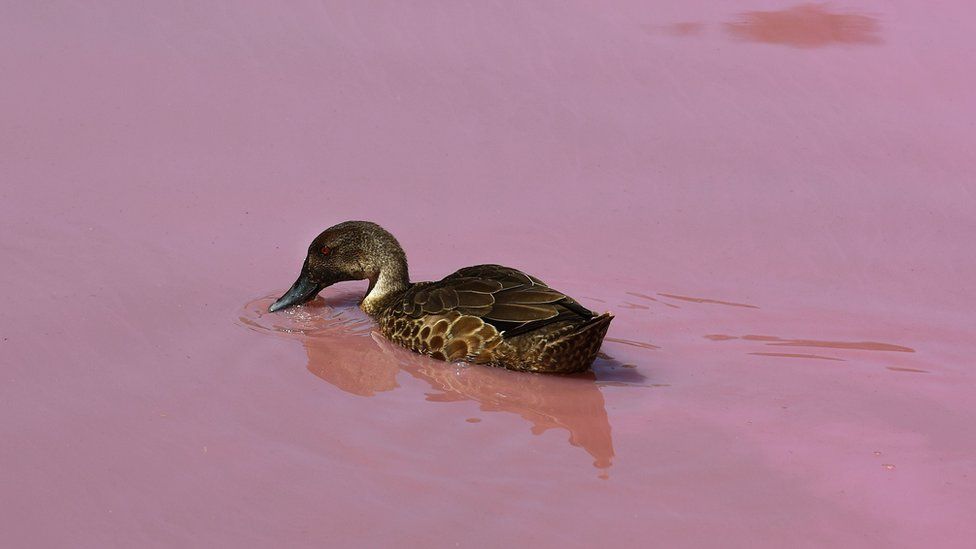 The lake's pink colour typically lasts through to late Autumn, until cooler temperatures restore it back to blue.

The "beto" is a typing mistake. Beta is an organic chemistry label referring to a beta-ring of 6 carbons that exists at either end of a carotenoid polymer C40-Hx.

It is localized in the chloroplast. The plants don't really have a mechanism to release pigments, they can re-metabolize chlorophyll. The volvocalean algea Dunaliella salina is used to harvest beta-carotene in Karratha, Western Australia, from salt lakes. The can have 12% beta-carotene as dry-matter content, the highest of any known source. The squares are probably salt. 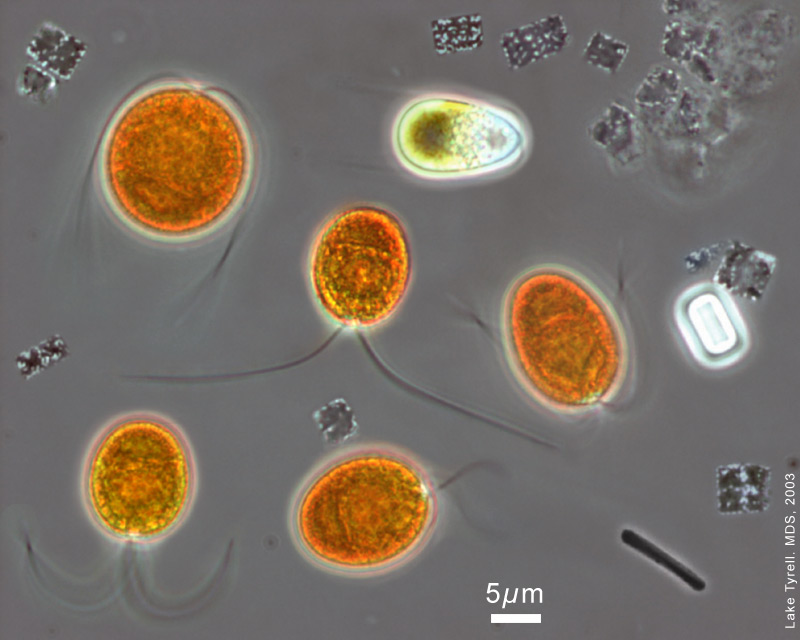 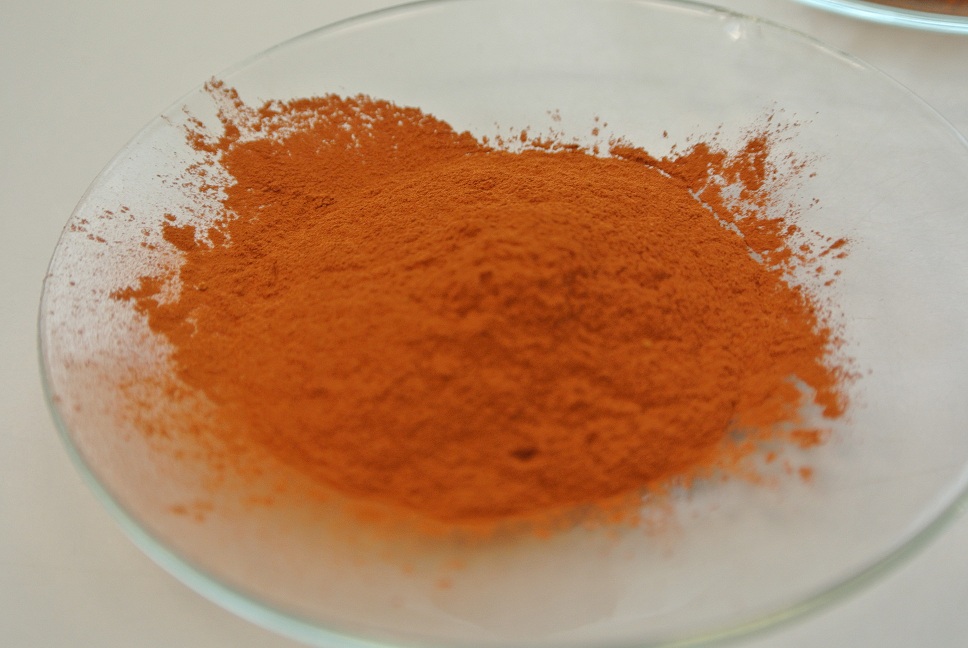 There are over 1,100 known carotenoids of which at least 700 have been identified in plants. They include carotene and xanthophylls, and carotene include beta-carotene. The plants and algea use it to protect themselves from intense sunlight and UV's. It is an anti-oxidant.

Pink doesn't actually exist as a color. It is imagined when green and blue light is sensed by the eye, while red is at a maximum. In the lakes, we know there is 80% red and 20% green pigment in the algea. All that is required would be 20% blue to percieve pink. I don't know where the blue color comes from, the sky/water. Orange is complex for the eye, and so is pink, because we can only see red green and blue.

There are several combined reasons.

first salt itself in such lakes is often pink, so part of the color comes from the salt crust itself. this is more noticeable in more extreme salt lakes where the deposits can be quite thick. It can be due to iron impurities but can also be further dyed by trapped carotenoids in the salt as it is deposited.

Part is also coming from salt loving halo-bacteria which use are not algae but are photosynthetic. They use bacterioruberin and salinixanthin for photosynthesis but not chlorophyll. these are carotenoids and pink, and responsible for many pink salt lakes like lake Hiller. (there is an interesting link between these bacteria and why chlorophyll is so inefficient that is worth reading)

the last is indeed beta-carotene, produced by salt tolerant algae.

In the case of that particular lake algae appears to be the major factor. However there are many pink lakes each caused by a different mix of carotenoids produced by salt loving organisms which depends on just how salty it is.

As for why it looks pink instead of orange, the answer is carrots have other pigments that shift the color further towards orange, particularly yellow pigments. Also water is transparent so mix a pigment into it and you get a lot of subsurface scattering which can shift color towards blue, this is part of the reason water is blue. Purple and pink are artifacts of how the human eye sees color and not "real" colors so when you combine reds and blues you get pinks and purples.

Not sure which kind of microorganism they talk about, but beta-carotene is a red-orange~ish pigment (as you pointed out, also produced by carrots). The pink coloration I would assume is the product of the color mixture of the pigment with green-blue from the water (not the water itself but the blue reflection from the sky + any other algae in the water). If they release it (the beta-carotene) to the water, again not sure which organism they talk about but it's probably not like it, since beta-carotene is a photosynthetic compound. Therefore is pretty likely they may want to keep it inside.

Not the answer you're looking for? Browse other questions tagged pigmentation color algae or ask your own question.

19
Why does hair turn grey or white, and why does it happen later for some?
8
What determines the colors and patterns of a clam shell?
4
What makes drosophila eyes red? and is it stable?
2
A strain of my hair has a grey spot in the middle, how is this possible? And why does it happen?
2
How can individual strands of coat hair have only a single color when considering codominance?
5
Melatonin production, sleep, and "cyan light"; how might this finding be possible?