I live in Amman-Jordan and I keep finding this bug species on my walls. I saw four till now on the walls of another room. A little bit bigger than the first one. 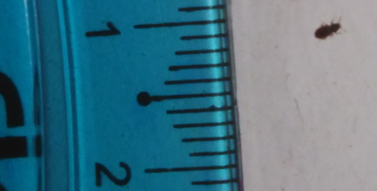 I also have a video, but don't know how to post it.

These are very likely flour beetles (Tribolium spp) of some kind. These small (~3mm) reddish-brown beetles are some of the most widespread and common pests of stored food products worldwide [source]. 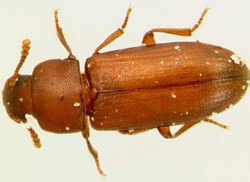 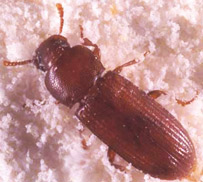 Distribution: Both species are essentially found worldwide; This UF/IFAS page provides a bit more nuanced explanation of their distribution:

The red flour beetle is of Indo-Australian origin (Smith and Whitman) and is found in temperate areas, but will survive the winter in protected places, especially where there is central heat (Tripathi et al. 2001). In the United States, it is found primarily in the southern states. The confused flour beetle, originally of African origin, has a different distribution in that it occurs worldwide in cooler climates. In the United States it is more abundant in the northern states (Smith and Whitman).

Extermination tips are available via epetsupply.com:

If I had to guess, I'd guess from your poor images that you have red flour beetles, but honestly it doesn't much matter from a pest-control standpoint.

Alternatively, now that I've looked at your picture with such a small specimen, it could be possible this is another "grain beetle": Ahasverus advena, the foreign grain beetle. From Wikipedia:

Description: The foreign grain beetle is approximately 2 mm (​1⁄12 in) in length. It can be distinguished chiefly by slight projections or knobs on each front corner of the pronotum, and its club-shaped antennae. The larvae are worm-like, cream-colored and often reach a length of 3 mm before pupating into darker adults. Males and females are identical in appearance both as larvae and adults. The adult is usually reddish brown, or sometimes black.

Distribution The foreign grain beetle is found in tropical and temperate regions [and is distributed all throughout the world -- see Spanish translation of Wikipedia page].

39
Insect identification - Is this a bedbug?
3
What kind of insect is this?
0
Can anyone identify this bug, it's got six legs
-1
Help identifying 3mm bug that looks like a bed bug

6
What are these tiny dark red insects?
14
Name and Behaviour of Arthropods near a Cactus
9
Small jumping bugs inside Swiss flat
5
What are these little leaves growing on these other leaves? (plant growing near the ocean)
4
Help identifying tiny jumping bug
2
Bug Identification: Tiny Bugs in Fairport NY