I apologise profusely for asking a silly question, but I am feeling confused and I am seeking more clarity on this subject.

Could anyone, please help me understand why the interaction between climate change, habitat loss, and monotonous diets with the energetic suppression of the bee itself (shown in diagram 1) has a positive (+) symbol?

Would these factors not have a negative effect (-) on the bees energetic suppression?

Would you only add + or - symbols to define interactions when:-

Would you not add + or - symbols for two abiotic factors i.e. elevated temperature produces extreme weather events and negatively affects a species habitat as these interactions don't involve living organisms (as shown in diagram 2)?

If anyone can help me understand better, I would be deeply appreciative!

Diagram 1 provides an overview of how parasites, pathogens and pesticides as well as other stressors interact to affect honey-bee health, eventually causing CCD in honey-bees.

How do insecticides and pathogens act synergistically to affect honey-bee health?

There are several hypotheses that have been proposed to explain the effects of pesticides (insecticides and fungicides) and pathogens on bee mortality and CCD including:

Exposure to insecticides suppresses the immune response of bees, promoting pathogenic parasitic (Nosema) infection and as a consequence increased viral loads. The mechanism by which immune suppression occurs has recently been elucidated (see Optional material). Nosema infection induces energetic stress in honey-bees that results in higher food intake by infected individuals. This directly results in an increase in insecticide oral exposure, increased toxicity and higher mortality in infected individuals. Bees are commonly exposed to plant compounds that can be toxic (called phytochemicals, e.g. nicotine) and use enzymes (P450 enzymes) to detoxify these compounds and also insecticides. When exposed to fungicides, these enzymes are inhibited, increasing the toxicity of insecticides to bees and also making them more susceptible to Nosema infection. Honey-bees have a form of social immunity (which is found in many social insects) that consists of cooperation between individual group members to prevent disease contamination. This collective immune defence includes hygienic behaviour where diseased individuals in the brood are removed from the hive, as well as the secretion of antiseptics to sterilise brood food. Exposure of bees to a combination of pathogens (Nosema) and neonicotinoids compromises their ability to sterilise larval food by decreasing the activity of an enzyme known as glucose oxidase. This enzyme catalysis the oxidation of beta-D-glucose to D-gluconic acid and hydrogen peroxide, the latter having antiseptic properties. A decrease in hydrogen peroxide allows the pathogens to spread within colonies. 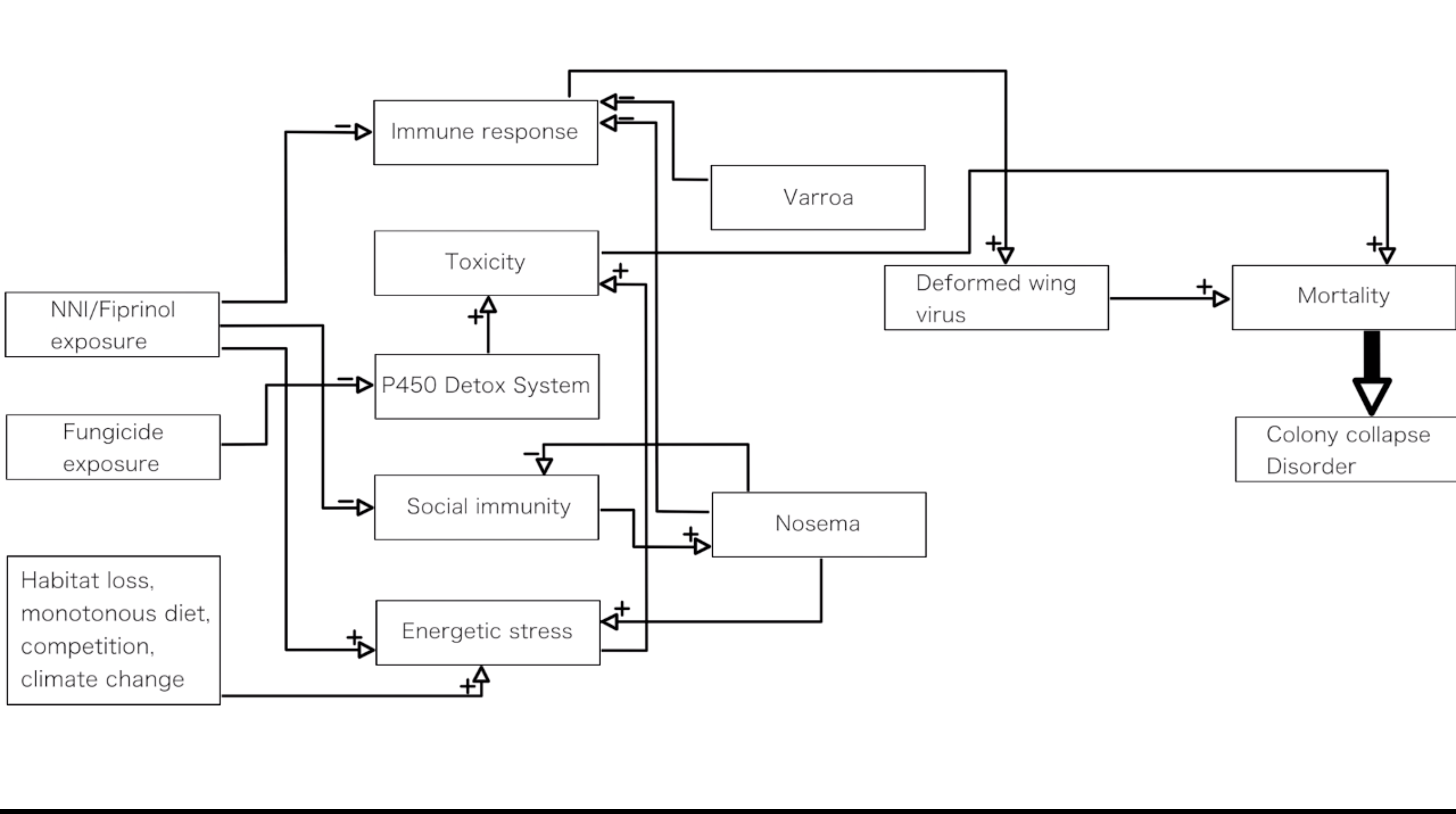 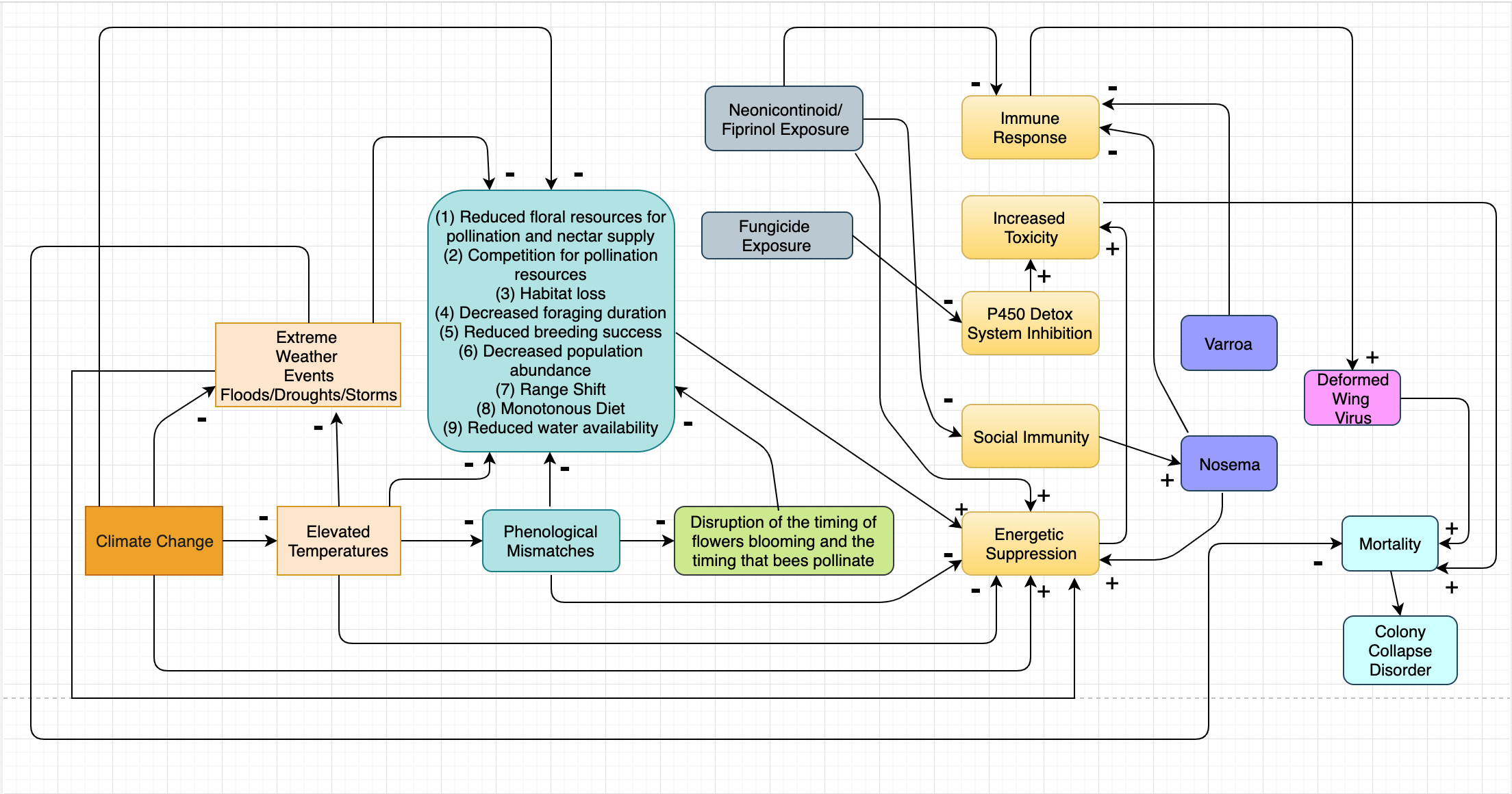 6
Are there known minimal marine ecosystems that are stable?
6
Why are there ecosystems?
7
What physics knowledge can be applied to biology of organisms and ecosystems?
4
Relation between biomass and radius of roots system
5
The effect of depth on net primary production in aquatic ecosystems
4
Nutrient limitation in terrestrial and freshwater ecosystems
4
What is meant by increase in information embodied in the system?
5
Is there any research on wolf and bobcat interactions?
0
What is the minimum sample size to get reliable results in haplotype and nucleotide estimations?