Gene cluster of interest not being amplified in PCR

In a lab, I currently have a sample of Rhizobium sp. NT-26. This bacteria is a chemolithoautotrophic arsenite-oxidizer, and I want to clone the arsenite oxidase genes into another bacteria strain in hopes of expression of those genes and learning more about arsenite oxidation and resistance. My first step of this experiment was to purify the plasmid DNA of a colony of NT-26 that I grew on a TSA plate. For this, I used the Omega Bio-teK E.Z.N.A plasmid mini kit I. After using the kit, I was left with 40 microliters of plasmid DNA solution. Afterwards, I wanted to amplify the genes of interest through PCR. The sequence of this gene cluster is listed on NCBI Nucleotide right here: https://www.ncbi.nlm.nih.gov/nuccore/AY345225. My main challenges for this project are designing the right primers for correct amplification, and the fact that this sequence is 9 kilobases, so I would need a high-fidelity taq polymerase blend. The main problem that I will focus on is the design of the primers. For one, I knew that I would be cloning this gene cluster into a plasmid expression vector for electroporation into a strain of E. coli. Because of this, I decided that I wanted to design my primers with restriction sites already attached. Long story short, I attempted PCR a total of 17 times, and I have not found the correct length of sequence in electrophoresis. I have tried PCR with many variations in the program and various other changes, and I have come to conclude that there is something wrong with my primers. I would like to go over the details of the project, and maybe I can receive a hint as to what I have done wrong.

The gene sequence that I am wanting to amplify consists of 6 total genes. The first four genes are aroB, aroA, cytC, and moeA1 (Santini et al. 2010). These genes are in one gene cluster. The other two genes are upstream, and they are AroS and aroR. These two gene clusters compose a two-component signal transduction system that encode for the autotrophic oxidation of arsenite. In her original publication, Dr. Joanne Santini added the link to the sequence of all 6 genes on NCBI Nucleotide. I have listed the link in the above paragraph. I went on Addgene's Genome Compiler and found the exact sequence from NCBI, and I have pasted a screenshot of that below. For some reason, the actual genes I am interested in amplifying do not start at the beginning of the sequence on NCBI. Instead, the first gene, aroS, starts at 424th nucleotide. From nucleotides 1-423, the Genome Compiler listed that as "unknown". For that reason, I decided to get rid of those nucleotides, and just amplify the rest of this. The same thing happened at the end of the sequence, where the last gene, moeA1, stopped at nucleotide 8,263. From then on, the Genome Compiler listed the rest as "unknown". I decided not to deal with the unknown regions, and just amplify the genes i am interested in.

The first gene of this sequence, aroS, starts with ATGAGCCTTCTCGAGC. I know that for designing primers, the forward primer should match the sequence of the beginning of the gene of interest. For this reason, the forward primer contained ATGAGCCTTCTCGAGC. Since I was cloning it into a vector, pBAD30 (the map is listed here https://www.addgene.org/vector-database/1847/), I wanted to add a restrction site to the forward primer. I found that kpnI would work for my sequence. The sequence of kpnI is "GGTACC", so I added it to my forward primer. The primer so far is typed like this: GGTACCATGAGCCTTCTCGAGC. I also learned that a sitting sequence should be added to the beginning of the primer, so I arbitrarily added four letters to the beggining "GTAT". After all three of these additions, my finalized forward primer is GTATGGTACCATGAGCCTTCTCGAGC. Designing the reverse primer is where I am not completely sure on the correctness of my design. The last 18 bases for the last gene, moeA1, are GAACCGTTCGCAATGTGA. I knew that the reverse primer should be a reverse compliment, so I found the reverse compliment to be TCACATTGCGAACGGTTC. As for my restriction site, I decided to use xmaI. The sequence for xmaI is "CCCGGG", so I added that sequence onto my reverse primer. The sequence so far is CCCGGGTCACATTGCGAACGGTTC. Just like the last one, I added the bases "GATA" as a sitting sequence. The final reverse primer sequence is "GATACCCGGGTCACATTGCGAACGGTTC".

After I designed both primers, I pasted those sequences into Integrated DNA Technologies and ordered primers in solution (100 mM with IDTE). For a PCR kit, I used the Expand Long Range dNTPack from Millipore-Sigma. This PCR kit included enzymes, nucleotides, and all buffers needed for PCR.

After the primers were delivered, I set up a few mastermixes for PCR. I followed the manufacturer instruction for setting up the mastermixes and the program (https://www.sigmaaldrich.com/content/dam/sigma-aldrich/docs/Roche/Bulletin/1/elongnrobul.pdf). The melting point of my forward primer was 60.5°C, and the melting point of my reverse primer was 64.4°C. Because of this, I chose an annealing temperature of 57.5°C. I am slightly worried about the difference in melting temperature and the effect it could have on annealing, and I realize now that I could have adjusted the GC-content of both of the primers to generate closer melting temperatures. However, I do not think that is causing the lack of amplification. One concern that I have about my mastermixes is that I do not know the concentration of DNA in the purified plasmid solution. Each matermix should have up to 500 ng of DNA, but I have used 1-8 uL of DNA solution in each mastermix. Could there be a possibility of too much DNA? Too little? I have tried many different variations, and none have worked. For the most part, each mastermix has used 3 uL of the given DMSO. On my 17th run of PCR, I did receive some sort of result. As I mentioned before, I did not mess with the unknown regions of DNA, so our final sequence of the 6 genes should be about 7.8 kilobases long. After PCR, I ran it under a gel, and this is what I saw: 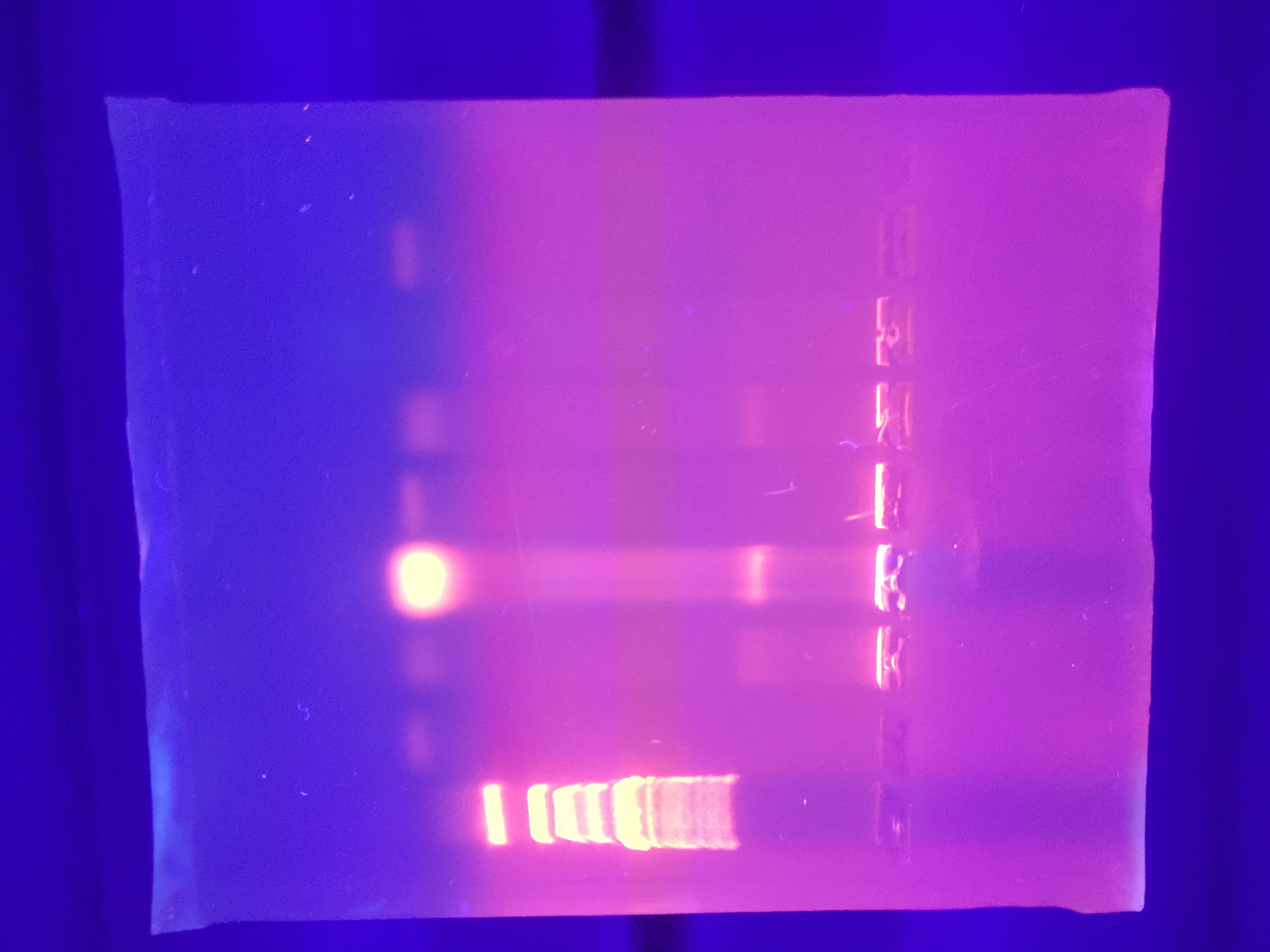 In the third lane, the bands of DNA were the brightest. Suprisingly enough, for the third lane, I added a colony of our bacteria to the mastermix for the DNA source, and a band was produced. Most of the lanes show a band of DNA, but the bands are not quite at the 7.8 kb region, so I'm thinking that it is not our desired product. Could this possibly be our product, but impurities slowed the travel of DNA? If so, I would like to know if I should continue with restriction digestion of the insert and pBAD30, and then ligation.

A few things to consider:

As for the "wrong"-size product - if you have enough of it, you could go ahead with the cloning, in which case you'll find out soon enough if it's the wrong thing. You can also check it's identity by doing some diagnostic restriction digests, or directly sequencing the PCR product with a couple internal primers.

One of the reasons why region may not be amplified via PCR is that the region is much larger than is thought. This may happen if there is a repeat of variable length in the region that may be difficult to sequence precisely, or have a different length in your sample than is shown inside NCBI database.

In the case we hit it was Homo sapiens. I am not sure about Rhizobium but who knows? Repeats seem not uncommon, see here.

Not the answer you're looking for? Browse other questions tagged molecular-biology pcr primer or ask your own question.

2
Creating expression template from PCR: What annealing temperature to use?
0
What happens if both forward and reverse primers have same Tm?
4
Manual Primer Design for a gene on the reverse strand
0
PCR a plasmid with self-complimentary regions?
1
Why is DNA polymerase added at the end of PCR reaction?
0
Polymerase Chain Reaction Specifics
1
Transformation and PCR in molecular cloning