I've read several fitness articles mentioning redirected blood flow to muscles that are in use. However, they never mention how it works. Is it local and specific to the muscles in use? Or, for example, I guess more blood has to flow through the entire arm if I am training my forearms..? So, won't the entire arm benefit to a certain extent?

I did some research and discovered the vascular shunt mechanism through the opening and closing of capillary sphincters. However, I cannot find any resources discussing how local this effect is. So, as an example, how much does blood flow to the arm improve if someone is training their forearm for six months?

A major determiner of blood flow redirection among muscles is increased oxygen demand in the working muscles.

When a muscle works, it uses oxygen, so the partial pressure of oxygen (PO2) in the muscle falls, which signals small arteries (arterioles) to dilate, which results in increased blood flow and hence oxygen and nutrients delivery to the muscle (Skeletal Muscle Circulation, NCBI Bookshelf). 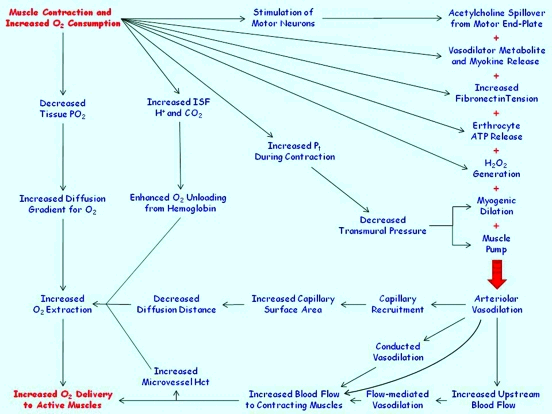 Not the answer you're looking for? Browse other questions tagged muscles blood-circulation or ask your own question.

14
Where does extra blood come from to fill your muscles during exercise?
4
Blood circulation - How to expand blood capillaries?
10
Are blood vessels organs?
2
By What Mechanism Does Heat Cause Muscle Relaxation?
0
What would happen if blood flow wasn't periodic?
1
Cell nanoparticle dynamics within blood
0
Are tergo-sternal muscles of cockroach involved in blood circulation?
2
“Blood circulation”. Why blood bleeds in atmosphere ?
0
Blood pressure in the blood vessels
9
Is there any justification for the claim that blood travels 12,000 miles per day?