I'm reading this paper, and I'm already lost in terms of what they mean by GPCR signaling is spatially encoded.

The trafficking of G protein coupled‐receptors (GPCRs) is one of the most exciting areas in cell biology because of recent advances demonstrating that GPCR signaling is spatially encoded.
…
…
Some GPCRs appear to regulate their own endocytic rate through modulation of clathrin‐coated pit (CCP) maturation.12-14 This regulation, which can differ between ligands acting at the same GPCR, is an additional method by which GPCR signaling can be spatially encoded.

How can signaling be spatially encoded?

cell-biology terminology cell-signaling
Share
Improve this question
edited May 9 '19 at 12:24

How can (GPCR) signaling be spatially encoded?

Terse explanation: During endocytosis the G protein-coupled receptor can be spatially constrained.

Abstract: The fact that over 30% of current pharmaceuticals target heptahelical G protein–coupled receptors (GPCRs) attests to their tractability as drug targets. Although GPCR drug development has traditionally focused on conventional agonists and antagonists, the growing appreciation that GPCRs mediate physiologically relevant effects via both G protein and non–G protein effectors has prompted the search for ligands that can "bias" downstream signaling in favor of one or the other process. Biased ligands are novel entities with distinct signaling profiles dictated by ligand structure, and the potential prospect of biased ligands as better drugs has been pleonastically proclaimed. Indeed, preclinical proof-of-concept studies have demonstrated that both G protein and arrestin pathway-selective ligands can promote beneficial effects in vivo while simultaneously antagonizing deleterious ones. But along with opportunity comes added complexity and new challenges for drug discovery. If ligands can be biased, then ligand classification becomes assay dependent, and more nuanced screening approaches are needed to capture ligand efficacy across several dimensions of signaling. Moreover, because the signaling repertoire of biased ligands differs from that of the native agonist, unpredicted responses may arise in vivo as these unbalanced signals propagate.".

"The notion that information is not only encoded by the chemistry of the signaling components but also by their spatial and temporal occurrence, brought about the term of ‘spatiotemporal signaling’ $^{[3]}$. Signal transduction can thus be categorized into at least three dimensions, (i) quality (which substances take part), (ii) space (where the event takes place) and (iii) time (when the event takes place). The interplay between these dimensions will hereinafter be designated as ‘dynamic signaling’ or ‘signaling dynamics’. Dynamic signaling is deeply entrenched in GPCR signal transduction as an increasing number of reports provide us with a glimpse into spatiotemporal aspects of receptor function $^{[4, 5, 6, 7, 8, 9, 10]}$.".

"Several GPCRs, including receptors previously thought to signal primarily from the cell surface, have been recently shown to signal from many intracellular compartments. This raises the idea that signaling by any given receptor is spatially encoded in the cell, with distinct sites of signal origin dictating distinct downstream consequences.".

During endocytosis the G protein-coupled receptor can be spatially constrained. 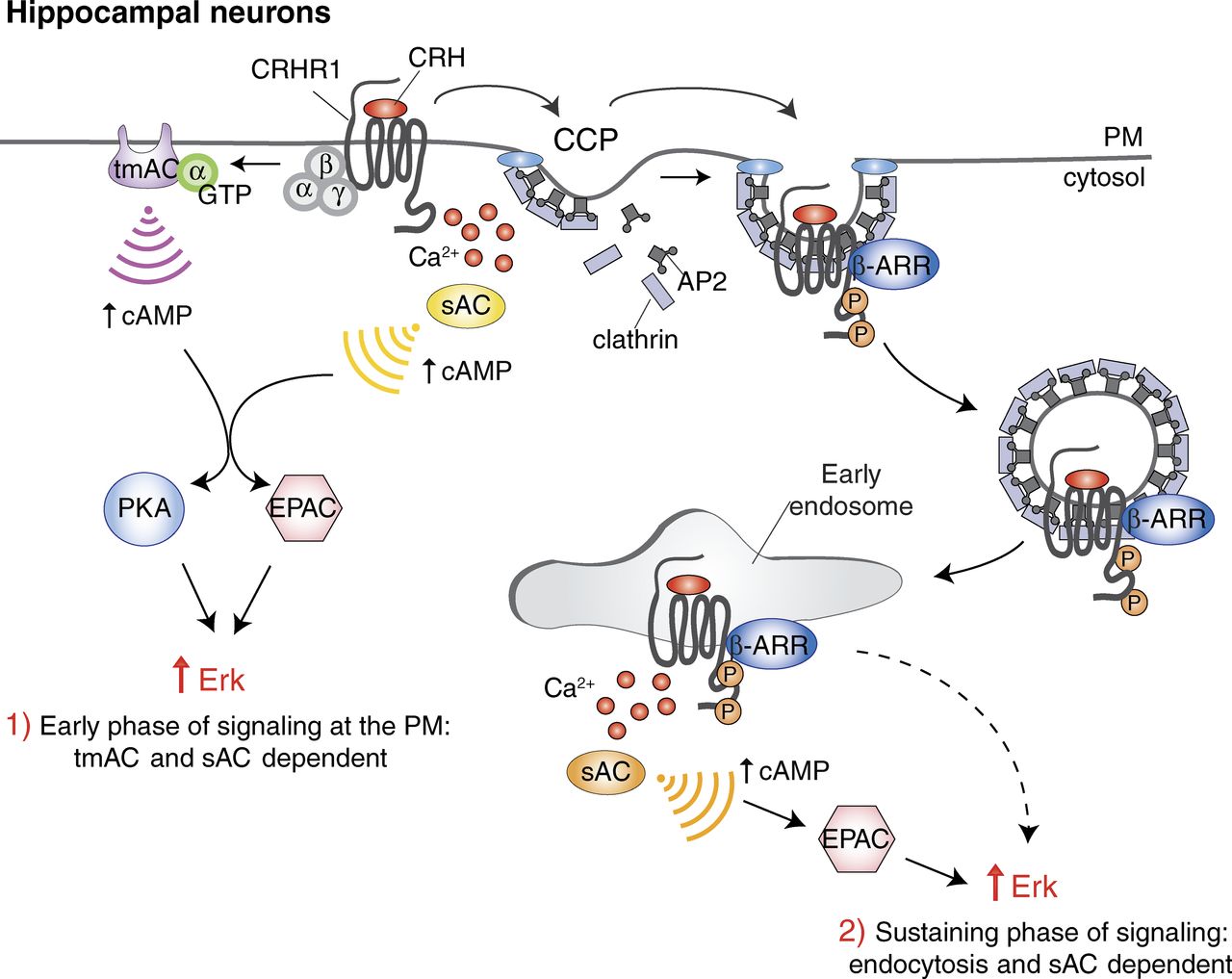 Figure 1. Spatial and temporal control of GPCR signaling by ACs. In hippocampal neurons, CRHR1, upon binding to agonist CRH, activates the trimeric G protein complex, composed of α, β, and γ subunits. Stimulatory Gα subunit is released and activates tmAC and cAMP production (Irannejad and von Zastrow, 2014). In parallel, activated GPCR can also induce local Ca$^{2+}$ release that activates sAC, followed by an increase in cAMP levels (Inda et al., 2016). (1) These two sources of cAMP at the PM contribute to the early phase of ERK activation via the effectors protein kinase A (PKA) and EPACs (Inda et al., 2016). Activated GPCRs once released from the G proteins are phosphorylated and recruit β-arrestin (β-ARR) to be internalized via clathrin-coated pits (CCPs; Irannejad and von Zastrow, 2014). (2) At the endosomal station, GPCRs activate sAC to trigger a second wave of cAMP production and to sustain Erk signaling in an EPAC-dependent fashion. sAC activation at the PM and at endosomes requires Ca$^{2+}$ and bicarbonate (not depicted for simplicity; Inda et al., 2016). The signaling cascade leading to Ca$^{2+}$ and bicarbonate release (particularly at the endosomal station) and the exact mechanism of action of sAC are not completely characterized. The different forms of ACs, and the corresponding cAMP gradients generated by them, are depicted in different colors to highlight their different roles. Whether this specificity reflects different isoforms and/or regulation remains to be clarified.

"The work reported by Inda et al. in this issue integrates and expands our emerging knowledge of localized GPCR signaling at the endosomal level. In a previous work, these authors showed that Erk activation by corticotropin-releasing hormone receptor 1 (CRHR1) signaling is biphasic, with an early response originating from the PM and a late response that is endocytosis dependent (Bonfiglio et al., 2013). In their new work, Inda et al. (2016) reinforce these findings, showing that distinct cAMP sources are differentially involved in the two phases of Erk signaling. Whereas tmAC and sAC both contribute to the acute Erk signaling response, sAC is specifically involved in the sustained “endocytic” phase of Erk signaling in hippocampal neuronal cells (Fig. 1).".

Note phase 1 and 2, targeting one phase or another, rather than continuous action, is spatially encoded.

Not the answer you're looking for? Browse other questions tagged cell-biology terminology cell-signaling or ask your own question.

3
How do GPCRs transmit a signal across the plasma membrane?
2
Are molecular machines encoded in the DNA?