Why would the body choose a resting temperature of 36.1c to 37.2c? It seems a very inefficient mechanism of survival considering the typical ambient temperatures on Earth. If there is a benefit to needing to continuously do extra work, what is it?

It's a balance between preventing infection and not requiring excessive food intake. It is has also been claimed that this is the temperature at which the most essential enzymes are most reactive, without becoming damaged by excess temperature.

"The number of fungal species that can thrive and therefore infect an animal declines by 6 percent for every 1° C rise in temperature. This means that tens of thousands of fungal species infect reptiles, amphibians and other cold-blooded animals, but only a few hundred harm mammals.".

It is useful to refer to ectotherms (an organism in which internal physiological sources of heat are of negligible importance in controlling body temperature, which permits them to operate at very economical metabolic rates) as poikilotherms when applicable.

"Poikilotherm animals must be able to function over a wider range of temperatures than homeotherms. The speed of most chemical reactions vary with temperature, and in order to function poikilotherms may have four to ten enzyme systems that operate at different temperatures for an important chemical reaction. As a result, poikilotherms often have larger, more complex genomes than homeotherms in the same ecological niche. Frogs are a notable example of this effect, though their complex development is also an important factor in their large genome.

Because their metabolism is variable and generally below that of homeothermic animals, sustained high-energy activities like powered flight in large animals or maintaining a large brain is generally beyond poikilotherm animals. The metabolism of poikilotherms favors strategies such as sit-and-wait hunting over chasing prey for larger animals with high movement cost. As they do not use their metabolisms to heat or cool themselves, total energy requirement over time is low. For the same body weight, poikilotherms need only 5 to 10% of the energy of homeotherms.". 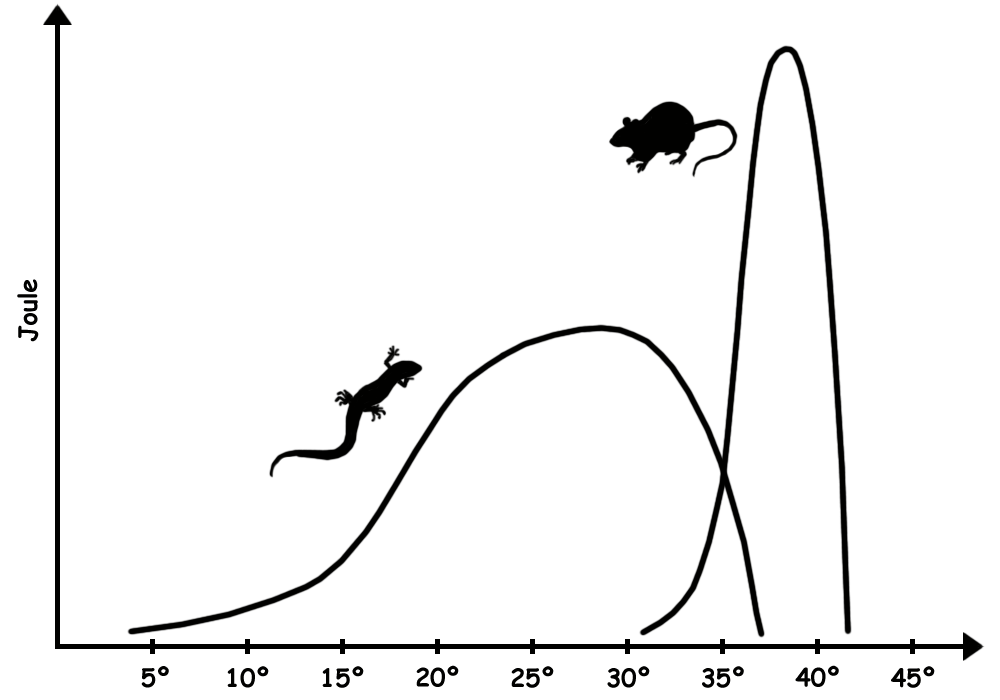 This update speaks to the theories on enzymes (solitary from metabolism), offered in other answers.

Articles and theories that are not discredited:

"The ATA stated in 2005 that a "thorough review of the biomedical literature has found no scientific evidence supporting the existence of 'Wilson's Temperature Syndrome'." The statement added that the mean temperature of normal persons in the AM on waking is 97.5 °F, not 98.5 °F, and that many of the symptoms described by Wilson are nonspecific and typical of depression, anxiety, and psychological and social stress. It also notes that a similar set of symptoms occurs in the alternative diagnoses of neurasthenia, chronic fatigue syndrome, fibromyalgia, multiple chemical sensitivity, chronic Epstein-Barr virus syndrome, and chronic candidiasis. Finally, the Association notes that chronic supplementation with triiodothyronine (T3) is particularly difficult and problematic, since various tissues set their own cellular levels of this hormone by making it individually from thyroxine, and supplementation of T3 may overwhelm this normal regulatory mechanism in some of these tissue.".

The treatment suggested by Wilson is what was discredited, the fact that enzyme reactions proceed differently at different temperatures is still supported. Reference to his article was included due to the partial overlap with established knowledge.

Consider if cavemen would be efficient at defending and fighting each other and predators if they took 15 minutes to warm up from a cold nap before they can start to move.

Animals with wider temperature ranges have to maintain many enzyme genes for enzymes that work at different temperatures, and that's inefficient.

If an animal is warm, it processes food and grows a lot faster, so it makes sense for all growing animals to be warm day and night if they can. Older animals can build up fat and reserves and milk and offspring faster if they are resting warmly also. So a female human would benefit from being warm from age 0-37 to breed.

Bears can be dormant at 33'C and alaskan marmots can adjust to 3'C. Humans that don't hybernate have to be active every day, and have to survive the nights, and grow fast, and build up fat reserves, and keep the immune system enzymes and antibodies at their most performant. 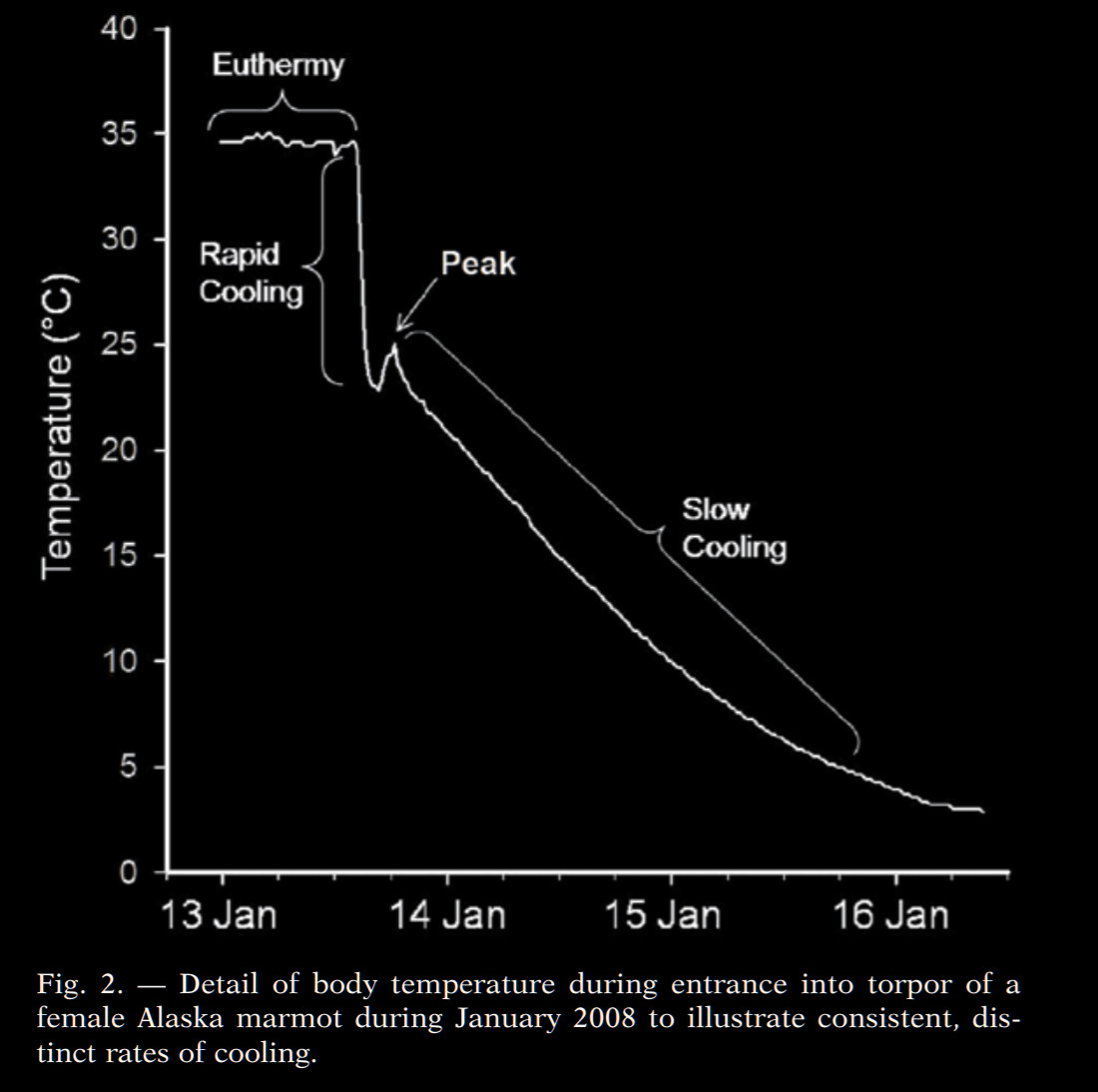 First, let's learn about the vocabulary to describe how living beings deal with their internal temperature with this answer. Now that you have read this answer, you understand that humans are homeo-endo-therms.

There are pros and cons of homeothermy. Those pros and cons depend upon the species and esp. upon the type of environment experienced by the organism. Here is one pro and one con. In the specialized literature, you;d find a much more exhaustive list of pros and cons

Homeotherms have the advantage that their internal working is not too affected by the outside temperature allowing them to maintain a high metabolism and a high level of activity in a variety of environmental conditions.

Depending upon the environment and the species, it may take a lot of energy (and other ressources) to maintain a constant temperature. For example, in mammals we see behaviours such as shivering, hair positioning (piloerection), vasoconstriction, sweating, change in body posture and other systems such as non-shivering heat production by brown adipose tissues.

The advantages seem fairly obvious, at least if you've seen reptiles in cold weather torpor. As another answer points out, the speed of chemical reactions varies with temperature. Maintaining a constant temperature allows those reactions (which ultimately determine the speeed of everything the body does) to happen at a constant rate, so animals can be equally active in everything from polar ice to tropical jungle.

Not the answer you're looking for? Browse other questions tagged genetics evolution physiology or ask your own question.

18
How did the human brain evolve?
11
Below which temperature human muscles don't work?
8
Why are humans and almost every species on earth symmetrical?
9
What's the worst that can happen from too much sleep deprivation? Can you die?
13
Should we induce fever to assist healing?
6
Why should evolution not be equated with progress?
0
What are the disadvantages of myelin