What are primary reasons for the failure to localise/anchor sequences in genome assemblies?

My question concerns the incorporation of individual sequence reads into chromosomes during gene sequencing projects, especially those with larger genomes such as Drosophila melanogaster or Homo sapiens.

There are some sequences or short contigs that it has not yet been possible to incorporate into the larger chromosome assemblies.

What are the reasons for this failure?

I'm going to re-interpret this question slightly to make it easier to answer:

"Why do genome assemblies frequently consist of large numbers of short contigs rather than a relatively small number of long chromosomes (or full replicons of other types)? And how could I make my assembly better?"

De novo sequence assemblies (usually) consist of a set of contiguous sequence fragments ("contigs") that have been derived from shotgun sequencing by some heuristic. If sequence assembly did a perfect job, we would expect that these contigs would be full chromosomes. Instead, what we observe is lots of sequence fragments with uncertain relationships to one another. In this common case, we think that some of the contigs could be stitched together ("localized", "anchored", "scaffolded") meaningfully into chromosomes, but we aren't sure how.

For de novo sequence assembly, there is no ground truth to compare to. So all of the information for generating assemblies comes from the starting sequences (which are usually "reads", small shreds of sequence that come off of a sequencing instrument). The heuristics that generate contigs from reads consist of finding overlaps between different starting reads and trying to extend them into the largest possible partially overlapping groups of reads, using some assumptions about rates of error in the sequence of the reads (and other variables). See wikipedia or this paper (figure inset) for a little more information on this. 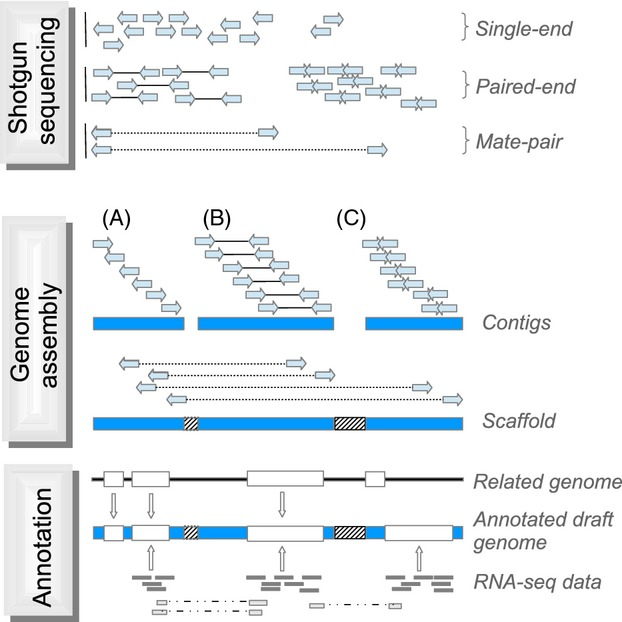 It turns out that there is a body of statistical theory that governs how large these overlaps will be, and therefore how big/complete your contigs will be. This body of theory says that the size and number of contigs is predictable to some degree from the size of the genome you're trying to assemble, the length of the reads, and the number of reads you have.

Some genomes, like maize, wheat, or the human genome, are also harder to assemble because they are "repetitive". This means that there are lots of very similar sequences in different places in the genome. So when you take a read from one of these places, you are uncertain which one of these very similar regions it comes from. These repetitive regions are hard to resolve unless you have very long reads or some parallel information, so they also lead to gaps in sequence. Such regions will also tend to be "collapsed", meaning that you only have one contig representing a repeat that should actually be present as several contigs with different locations in the assembly.

Sources of parallel information that are helpful are proximity ligation (methods such as Hi-C), genetic maps from crosses, or optical mapping. These orthogonal sources of information express relationships between contigs in terms of their closeness on a chromosome. Here is a paper with more information on these topics. Recently, long read technologies such as PacBio or nanopore sequencing are starting to read through large repeats, but they are still usually not reliable enough to fully assemble even smallish genomes "telomere-to-telomere".

So, if there is a recipe for localizing/anchoring/scaffolding fragmented assemblies, here is roughly what can be done:

Not the answer you're looking for? Browse other questions tagged genetics bioinformatics dna-sequencing genomics sequence-assembly or ask your own question.

7
What percentage of the human genome hasn't been sequenced yet? If percentage estimates aren't precise, why is it difficult to estimate?

49
What exactly are computers used for in DNA sequencing?
15
Why did high A+T content create problems for the Plasmodium falciparum genome project?
6
Transcript(omics) terminology: cDNAs, ESTs, RNA-seq, etc
6
What is the potential function of ultra-conserved elements in the genome?
1
What is the close and related genome used for in Gene models?
1
What are genome wide functional linkages?
0
What is known about the coding sequence of Factor H in the human genome?
5
Where can I find SARS-CoV-2 genome sequences for the UK?
0
What is limiting the accuracy of genome sequencing today?
5
What were the challenges to sequencing the last 8% of the human genome that took 20 years to overcome and how was this done? (T2T Consortium)