The cytochrome b6f complex is often drawn as pumping protons, but then someone told me that actually there is no pumping, rather the Q cycle.

According to this view, what actually moves the protons is that a PQ takes up 2 H+ from the stroma as it is reduced and another two PQ release 2H+ into the lumen as they reduce PC and partially reduce the first PQ. The complex, therefore, does not physically pump the protons.

I now wonder if any of the photosynthetic complexes pump protons. For example, the PSII complex has PQ reduction with 2H+ removed from the stroma and its oxygen evolving complex releases O2 and 4H+ into the thylakoid lumen, so this could be its ‘pumping’ contribution.

Although I am not an expert in this area, as an ex-chemist I find this topic one of the most fascinating and fundamental in chemical biology. I have constructed an answer starting from my copies of the 5th (available on line) and 6th editions of Berg et al. Biochemistry (2003 and 2007, respectively), and then searched the Protein Data Bank for structures of the cytochrome b6f complex, and worked from the papers associated with more recent entries.

First, it is important to be clear on the following:

What is meant by a proton pump (physical or otherwise)?

I think that the question — and the scientific community in general — probably assumes a pump to have some sort of channel or revolving door through which the protons are driven from one side of a membrane to the other. If one were able to tag an individual proton to follow it, one would find that it was physically translocated across the membrane. (A model for this might be the Na+/K+-ATPase. See also Berg et al. Biochemistry in Chapter 13 “Membrane Channels and Pumps” although this does not actually mention pumps in relation to either photosynthesis or oxidative respiration.)

This would be in contrast to the net translocation of protons across a membrane by chemical sleight of hand. A reaction at one side of the membrane would consume protons, and a reaction at the other side would emit protons. However no individual proton would pass through the membrane.

Both these processes would be working against a concentration gradient and require energy, in this case in the form of reducing power — not, of course, ATP.

This difference is illustrated in Berg et al. with respect to cytochrome c oxidase (Fig.18.21) in which both processes occur, where the authors refer to ‘pumped protons’ and ‘chemical protons’:

And the answer is…

That the situation in photosynthesis is similar to that for the oxidative electron transport chain:

Net translocation of protons across the membrane is achieved both chemically (in photosystem II) and by ‘pumping’ (in cytochrome b6f).

The cartoons shown above (taken from Berg et al.) are based on a wealth of indirect experimental data. However some of us are never convinced until we have seen the stigmata. The structure of the cytochrome b6f complex was reported in Science in 2003 by William Cramer’s group, and in the diagram below (my modifications) there is a channel through which the passage of protons is indicated.

A more recent (2013) paper from the same group considers the proton transfer pathway in cytochrome b6f in more depth, and I reproduce below Fig. 1B from that paper to indicate the type of molecular detail. 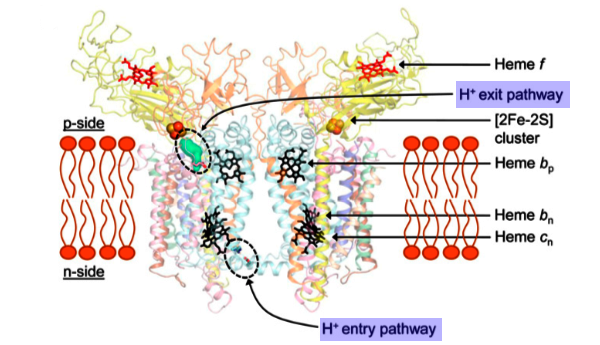 Not the answer you're looking for? Browse other questions tagged photosynthesis membrane-transport energy-metabolism or ask your own question.