Is sugar absorbed into the bloodstream through the walls of the mouth?

If you let a piece of candy melt in your mouth, but did not swallow it, would the sugar be absorbed through the walls of your mouth?

Simple sugars such as glucose, fructose and galactose will be absorbed. 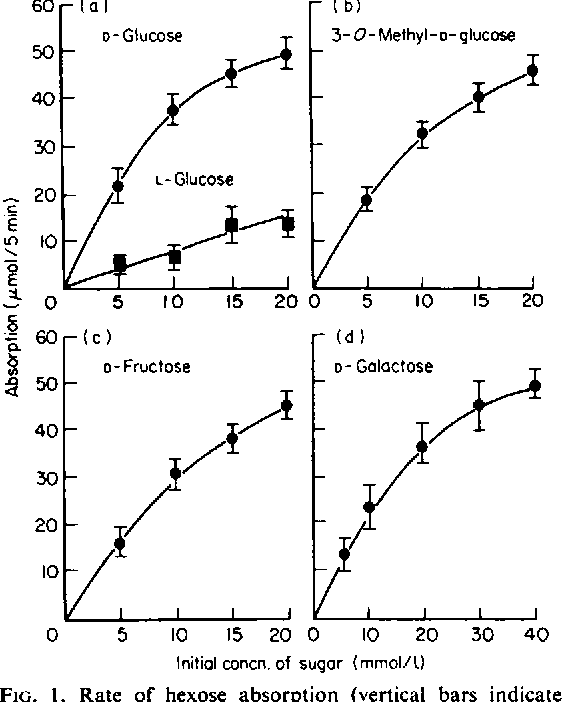 Here's a back-of-the-envelope calculation: about 10mg is absorbed in 5 minutes when you hold a solution of 3.6g/l in your mouth. A normal gulp volume is around 10ml. That's 36mg of sugar in a mouthful. Result: you can absorb 10mg of sugar from a theoretical maximum of 36mg. In other words, within 5 minutes, you absorb ~30% of all available sugar. That's pretty good, given that a sugar solution is not a more concentrated, solid sugary food!

See other posts already here on the topic.

The absorption of sugar from the mouth is possible and it was successfully tested for treatment of hypoglycemia. In all mentioned studies, they used D-glucose (dextrose), which is a common natural or added sugar in foods and beverages.

1) Sublingual sugar administration as an alternative to intravenous dextrose administration to correct hypoglycemia among children in the tropics (Pediatrics, 2005):

Analysis of regression coefficients after 30 min compared to the control session, demonstrated an increase in PG [plasma glucose] with the sachet of liquid sugars (0.068 mmol/l/min, p = 0.001) which was greater than a single dextrose tablet (0.052 mmol/l/min, p = 0.002), but no significant PG increase was found after buccal glucose spray. Liquid sugars or dextrose tablets, but not the buccal glucose spray, are effective means to increase PG within 10 minutes after ingestion.

Providing sugar under the tongue (sublingual) resulted in a greater rise in blood glucose after 20 minutes than giving the sugar orally, but this was in a specific setting including children with hypoglycaemia and symptoms of concomitant malaria or respiratory tract infection. On the other hand, giving glucose by the buccal mucosa route resulted in a lower plasma glucose concentration than with the oral route. For dextrose gel (where uptake of the glucose occurs through a combination of oral swallowing and via the buccal mucosa), no clear benefit was shown compared to oral glucose administration (glucose tablets or glucose solutions).

Important: Currently, buccal glucose is not recommended to treat hypoglycemia, except in uncooperative children who refuse to swallow glucose (International Liaison Committee on Resuscitation, 2019) .

Not the answer you're looking for? Browse other questions tagged food digestion sugar or ask your own question.

18
Why would diffusion be faster across a non-specialised tissue?
16
What nutrients can humans absorb in the mouth?
7
Why is sugar absorbed very fast into the blood stream?

2
Storing Apples at 30F?
0
Does the lung absorb organic food?
0
Does applying sugar to the tongue taste buds releave sugar withdrawal symptoms?
1
How is sugar in fruit metabolized, or digested and used?
2
Does the body prioritise the use of available sugar before fat?
7
Can Fluoride be absorbed into the blood from within the mouth without swallowing?
0
How does the digestive system determine what to absorb [as nutrients] into the bloodstream?
2
How is fructose absorbed into the body
7
Why is sugar absorbed very fast into the blood stream?