Backbone hydrogen bonds between adjacent amino acids in a protein?

Is it possible for two adjacent amino acids in a peptide to form hydrogen bonds between the backbone NH and CO?

Are there any examples of such situations in proteins and how common are they?

If such bonds are rare, why is this so?

The situation you ask about was originally part of the 27 ribbon and 2.27 helix structures considered as possibilities by protein chemists (Linus Pauling?) in the 50s or 60s. The diagram below, showing the ribbon, is from the classic text (long out of print) The Structure and Action of Proteins by Dickerson and Geis.

Calculations indicated that a 2.27 helix would be less strained than the 27 ribbon:

I could only find one report of this structure, and that was in the artificial peptide Ac-(∆ELeu)5-NHMe, with a model using dihedral angles Φ,Ψ approx. –60°, 30° (as in the Rama simulation) shown below: 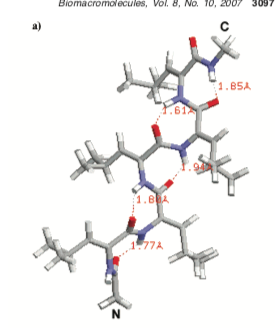 It should be noted that this position of the Ramachandran plot is at the margins of stability, and I would expect the bonding only to occur in proteins where it was stabilized by other interactions (as in this artificial peptide) and no lower energy structure were possible.

Not the answer you're looking for? Browse other questions tagged biochemistry proteins protein-structure protein-folding or ask your own question.

4
Are There Rules for How Proteins Are Formed?
8
Is consuming proteins different vs. consuming amino-acids and how?
4
Amino acid compatibility
5
Are all protein composed of all the amino acid (in animal) or are there less diverse protein?
4
Should there be separate Ramachandran plots for an amino acid in different contexts?
4
What would be the fate of protein made from D-amino acids after ingestion by humans?
5
List of proteins by number of amino acids / chain length