Are mitochondrial genes decoded in the same way as nuclear genes?

Mammalian mitochondrial genomes contain only 22 tRNA-coding genes, which is an insufficient number to decode mRNAs under the standard wobble rules.

How is translation of mitochondrial mRNAs achieved with this number of tRNAs?

The possibilities that occur to me are that certain genes encode multiple tRNAs (but this appears unlikely as each gene has its own promoter) or that mitochondrial tRNAs can adopt alternative three-dimensional structures, each with a different anticodon loop and hence a different anticodon.

Translation in the mitochondria of mammals differs markedly from that in the cytoplasm. Although it has more similarity to translation in prokaryotes, it also shows significant changes from the latter. A smaller repertoire of tRNAs is able to translate a ‘simplified’ genetic code through structural alterations and base modifications that allow their anticodons to decode groups of synonymous codons, not possible according to the standard wobble ‘rules’.

Relationship to the eubacterial translation system

One of the pieces of evidence for the endosymbiotic theory of the origin of mitochondria was the fact that their translation machinery was more similar to that of prokaryotes than to that in the eukaryotic cytoplasm. The similarities to prokaryotes included the (smaller) size of their ribosomes, the susceptibility of their ribosomes to antibiotics specific for bacterial ribosomes, and the formylation of their initiator tRNA — fmet-tRNA.

Although in no way rebutting the endosymbiotic theory (which is widely accepted), mitochondrial translation shows several differences from that in prokaryotes. These include there being a single tRNA to decode methionine in both initiation and elongation (discussed below), the lack of leader sequences preceding the initiation codon, hence precluding a Shine & Dalgarno type of recognition by the ribosome, and additional ribosomal proteins which are thought to “provide a specialized platform for the synthesis and membrane insertion of the highly hydrophobic protein components of the respiratory chain”.

As the question states, mammalian mitochondria encode 22 mitochondrial tRNAs, which would be insufficient to decode mRNAs using the standard genetic code and the wobble ‘rules’ that apply to translation in the eukaryotic cytoplasm and in prokaryotes.

One way out of the dilemma would be if some of the tRNAs were encoded in the nucleus and imported into the mitochondrion in a similar manner to that of nuclear-encoded mitochondrial proteins. Although this turns out to be true for certain organisms (although the import system is different from that for proteins), and important in some cases, this is not the answer for mammalian mitochondria. Thus, as reviewed in Current Genetics (2009), the mitochondrial tRNAs encoded in the nuclear genome of H.sapiens only duplicate the 22 mitochondrial tRNAs and their anticodons. (The one exception is an extra Gln(anticodon CUG) in addition to the Gln(anticodon UUG).)

Let us look more carefully at the problem. Although there are 61 codons specifying amino acids, because of wobble, fewer than this number of tRNAs are required to decode them. The left-hand frame of the figure below shows the standard genetic code, and the minimum number of tRNAs needed to decode it using the wobble ‘rules’ shown beneath, indicated by the colour-coded rectangles.

For those not familiar with the actual pattern of wobble (summarized in my answer to another question), in elongator tRNAs the 5′-position of the anticodon has some flexibility such that a G in that position can form base pairs with U or C in the 3′-position of the codon, an inosine (I) can pair with U,C or A, but an anticodon C can only pair with a codon G. The unmodified bases A and U are rarely found in anticodons, but a variety of different chemically modified Us are found (U* in the figure) which only pair with A. Thus, the minimum number of elongator tRNAs needed would be the number of coloured rectangles — 36 — and, as there are separate species of tRNAmet for initiation and elongation, the minimum number of tRNA species is 37. 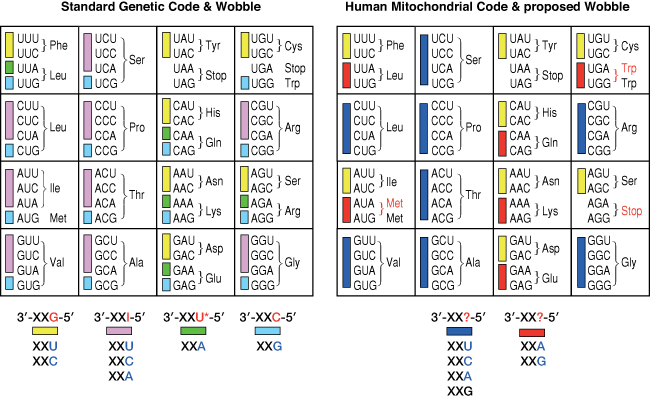 When the human mitochondrial genome was sequenced, two anomalies stood together: the limited number of tRNA genes already mentioned and (more sensationally) changes from the standard genetic code (indicated in red on the right-hand side of the figure). It was immediately realized that these changes served to rationalize the code so that all synonymous codons were in groups of four or two. If it were assumed that the decoding specificity or wobble of mitochondrial tRNAs were different, then 22 tRNAs would be sufficient using the ‘wobble’ shown beneath the right-hand frame of the figure for groups of four amino acids (dark blue) and groups of two amino acids with codons ending in A or G (red).

One further requirement was that a single tRNAmet be involved in both elongation and initiation, a requirement the fulfilment of which has already been mentioned.

What features of the tRNAs could change the wobble ‘rules’ that have been conserved between prokaryotes and eukaryotic cytoplasm? There turn out to be two types of changes. The first, and most obvious, is the fact that certain (but not all) mitochondrial tRNAs have non-canonical cloverleaf structures, the most extreme being tRNAser in which the whole D-loop is missing. The second is the post-transcriptional modification of bases in the anticodon — just as is the case for tRNAs in the cytoplasm, this can markedly affect decoding specificity.

It is not yet possible to describe the codon–anticodon interaction in mitochondrial translation in the way that this has been done in for the cytoplasm or for prokaryotes. The problem would appear to be the difficulty of obtaining sufficient pure tRNAs. Whereas it is easy enough to clone and transcribe the tRNA genes, this is insufficient without the secondary chemical modifications of the bases which is key to the structure and function of the tRNAs.

It turns out (and I’m not a 100% sure of this) that every tRNA-coding gene could give multiple variants of anticodons by different folding ways, so that you’d have enough anticodons in the end.

Not the answer you're looking for? Browse other questions tagged molecular-genetics mitochondria translation trna or ask your own question.

8
Redundancy of the genetic code
0
Could Wobble Base Pairing ultimately yield an amino acid that was originally uncalled for or not expected?