How do sharks and other fish conserve and gain water in marine environments?

With the osmolarity of the average vertebrate being around 300mOsml, and salt water having an osmolarity of 1000mOsml, why does the water from the shark not leave to the salt water around it?

I presume the scales must act as a barrier to stop water form leaving, but with the blood vessels being exposed to the saline water in the gills, why does water not leave the body?

zoology marine-biology ichthyology
Share
Improve this question
asked May 12 '13 at 21:21

The mechanisms of osmoregulation is different for sharks (and other elasmobranch fishes) and teleost fishes.

In Elasmobranchs the body osmolarity is maintained equal to the seawater by Na⁺ Cl⁻ and urea. Toxicity because of high concentrations of urea (strong chaotrope) is counteracted by high levels of trimethylamine oxide (TMAO). So, the elasmobranchs do not need to drink water to prevent dehydration. But sometimes they do drink water for adapting to different salinity levels [1].

Teleost fishes, however, need to drink water in order to prevent dehydration. Initially Na⁺ and Cl⁻ are absorbed in the esophagus via cotransporters (Na-Cl/Na-K-Cl), thereby reducing the osmolarity of water. The cells that absorb Na⁺ maintain its low concentration by pumping extra Na⁺ in the Extracellular fluid, using Na⁺/K⁺-ATPase. Cl⁻ is also exchanged with Bicarbonate (HCO3⁻) via anion exchangers [2]. 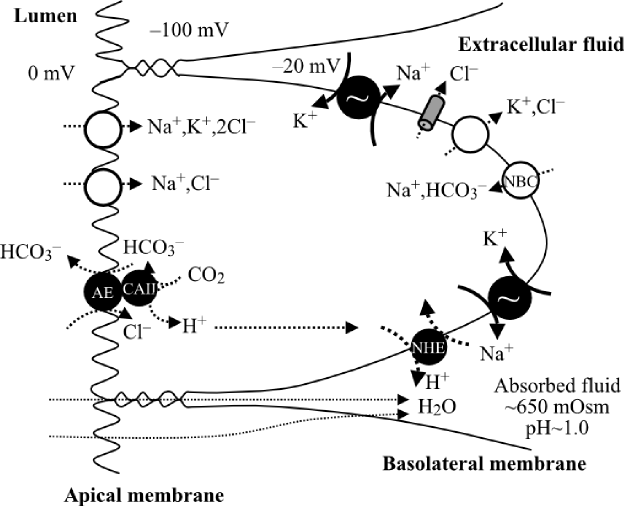 6
Do saltwater fish need to drink?
6
How to tell if a beverage will hydrate or dehydrate?
1
Is the PCT of the nephrons of the kidneys of marine vertebrates to minimize the natural tendency for exosmosis?

5
How do fish tolerate pH changes in water?
4
About sharks and how they find fish
1
Why isn't the biological niche occupied by whales instead occupied by fishes?
3
Are the cells (structures) of deep sea fish different? And can they survive in shallow water?
3
How do marine mammals and penguins maintain bone density?
5
Is the Opah a warm blooded fish?
10
Inexperienced divers damage coral, but parrot fish eating coral doesn't do damage?
24
What exactly is this small puffer fish doing and how did it manage to accomplish such a feat?