What is meant in biology by the term "evolved"?

A student asked me this the other day and I thought that I would ask it again here. If one organism is said to be "more evolved" than another, what exactly does this mean?

"More evolved" is actually meaningless in all contexts. See terdon's answer for a good explanation.

In the strictest sense, an organism can be said to be more divergent than another when comparing both to an outgroup, such that there is an inferred most common ancestor in reference to which to make the comparison. In this case, one organism is more divergent if there are more changes to this organism than the other, relative to the reference point.

However, when speaking, many people get lazy, and use "more evolved" as shorthand, wishing it to mean something like "more divergent". Even "more divergent" is meaningless in the following contexts:

I cannot improve on Thomas Ingalls' description of when "more evolved" is appropriately used, but the inappropriate/lazy use of the phrase is so prevalent that it deserves further comment. In my experience, the most common use of the phrase "more evolved" is when describing the increased complexity of one organism versus another. This usage is not just meaningless, but wrong and harmful, and springs from a misunderstanding of what evolution implies. Evolution is emphatically not the same as increased complexity.

I try to avoid saying "more evolved" and tend to favor "more complex", "less simple" or "less primitive." "Primitive" has its own problems, since it sometimes brings with it the connotation of evolution (a "primitive eye" or "primitive nervous system" are common phrases), but it at least avoids an explicit misuse of "evolved."

Evolved is not a quantitative term, you cannot really be more or less evolved than something else.

It is a phrase in common parlance without scientific meaning, fitting in the same category as devolved or devolution. It is as @terdon said:

There is no such thing as more or less evolved.

In a scientific context you should always find the evolutionary measure in question and the methods for quantifying that measure.

In a biological context the phrase would fail to find meaning, when evolution is a function of fitness. In such context fitness is inevitably tied to environmental parameters. The more complex these parameters, the more niches may be available for potential species, with temperature being one of the strongest factors (See: Effective evolutionary time Hypothesis ). Take this assertion with the necessary caution, as it is far outside my expertise.

Mostly I have come across the phrase more evolved in reference to large, tangible species, and also in science fiction.

Tell your student, to always be aware that in the end the unicellular species make life for us on this planet viable - we coevolved. But they also eventually consume/recycle us in one way or another, and surely will outlast us. It takes extreme effort and finesse for a large, energetic multicellular host to obtain, maintain and retain its niche on this planet. In all of the field of molecular biology there is nothing quite like Immunology.

For a mind experiment, let the student imagine soil with different pH, of the same plant species which equal seeding-times.

The outcome may be something as shown below. The phrase "more evolved" clearly fails to describe such a scenario of one generation of plant species, and hence is not suitable in an objective description of evolution. 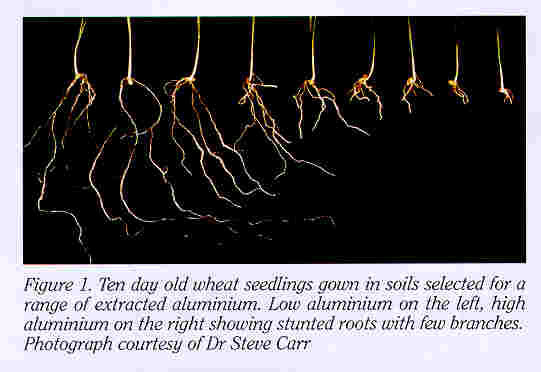 I have mostly seen it used to mean "possessing features that appeared most recently in the historical evolutionary record". Thus a human is considered more evolved than a chimp because our bipedality, hairlessness and large brain appeared more recently than the features of chimps, and a chimp is more evolved than a fish because fish very similar to ones alive today appear in the record before anything resembling an ape, and so on.

I think it's pretty poor use of language, frankly, since it suggests linearity and ordering to evolution that is simply not there, conflates gross morphological change with change in general and incorrectly implies that stabilising selection is not evolution.

2
How does the creative process of Biological Evolution work?
2
Are we "more evolved" than present-day bacteria?
4
Are there examples of now-living species where one is descended from the other?
5
What is the most basic organism to respond to Classical conditioning (capable of learning)?
-3
Which is more evolved Rays or Sharks
1
Are we evolving to age slower, or to live longer aging at the same rate?

7
What exactly does adaptive mean?
13
When did CRISPR/Cas9 evolve and what is the likelihood that a superior system for live cell genome editing has already evolved on earth since then?
0
Evolutionary chronology - if any, which species have evolved in the last 100 years
6
Why should evolution not be equated with progress?
2
Are we "more evolved" than present-day bacteria?
2
Genotype-Phenotype evolution distinction
2
Did bilateral symmetry evolved just once?
1
What does it mean for a species to be ancient?