Breeding laboratory mice with cancer; how does this work?

It has recently been brought to my attention that live laboratory mice with specific cancer strains can be readily purchased for medical research. For example, the Jackson Laboratory sells mice with a wide range of strains of cancer (with price depending heavily on the type of cancer desired).

Question: What is the general process behind breeding laboratory mice with specific cancers for medical research?

Cancer is a highly genetic disease, and much is known about how different genetic mutations contribute to the generation, growth, proliferation, metastasis, and control of tumors. Jackson Labs (commonly known as Jax in the research community) provides literally thousands of strains of mice, each bred/genetically engineered to have certain genotypes and/or phenotypes, a good proportion of which can be used for various purposes in cancer research.

I'll take a very basic example to walk you through the creation of a "cancer mouse." Say I've been doing research and have found through studying the DNA of many patients that the ABC123 gene seems to be associated with a certain type of cancer (skin, for example). I want to know more how ABC123 works, so one of the first things to do is to find out what (if anything) goes wrong when it isn't there - when it gets "knocked out." Using genetic engineering techniques, I create a sequence of DNA (called a vector) that matches the "wild-type" (WT) or normal mouse ABC123 gene sequence at the ends, but in the middle has a certain selection gene called Neo instead of the rest of the ABC123 sequence: 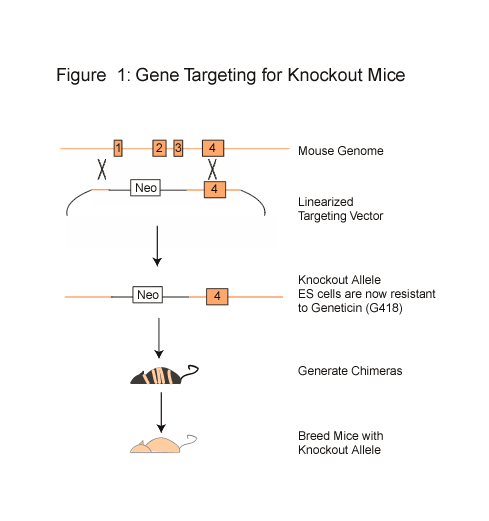 Neo makes cells that it is in resistant to a certain antibiotic called Neomycin or Geneticin, also called G418. I take my targeting vector and electroporate it into mouse embryonic stem cells (ESCs) that, if implanted into an appropriately-prepared female mouse, could develop into a normal mouse embryo. I then culture these ESCs in the presence of neomycin, which will kill any cells that haven't taken up and incorporated the vector into the genome.

Once I have some cells that I know have taken up the Neo part and are missing the targeted part of the gene (the exons marked 1, 2, and 3), I inject a few cells each into mouse blastocysts, where they divide and differentiate to form various parts of the new mouse.

This is a chimeric mouse, with different cells coming from different origins, either wild-type or ABC123-mutant. I try to generate a number of different chimeras to breed together in the hopes that at least some of my original injected mutant cells went on to form the gonads, and the mutant gene can be passed on to its offspring. I then breed the various chimeric mice to WT mates in hopes of producing heterozygous offspring, which have one copy of the WT-ABC123 gene (from one parent), and one copy of the mutant-ABC123 gene (from the other parent). These mice can then be bred together to produce homozygous "double-knockout" mice, which I can then use to study my gene's effects and its possible relation to skin cancer. This is the type of animal typically sold by Jax, although this depends very strongly on the gene being studied.

Now, there are many issues that can arise along the way, such as the mutation being embryonic-lethal, causing sterility, or other defects that don't allow you to produce true knockout mice. Much can still be learned, though, and scientists have gotten very inventive in producing functional animal models of previously-difficult mutations. For example, it is possible to engineer a strain that only becomes a knockout when you feed it a certain chemical in its water, or is only knocked out in certain cell types or tissues. Some gene functions are only apparent when two (or more!) genes are knocked out at the same time. Genetics is incredibly complex, but fascinating, and more and more complex tools are being developed all the time to assist scientists in their research and ultimately help people overcome illness and disease.

14
Can cancer grow forever if supplied with unlimited resources?
3
How does electrolarynx work?
0
How does cancer of the larynx (laryngeal cancer) affect the respiratory system?
1
How is cancer associated with host pathogen interaction?
3
How does translational immunotherapy work?
0
Why are babies rarely born with cancer?
8
Why might long telomeres be selected for in laboratory mice?