In marine DNA viral diversity studies, what would "paradigm of rampant mosaicism" refer to?

In the Results and Discussion section, the subsection Validating Viral “Population” Boundaries begins with the paragraph:

Defining species is controversial for eukaryotes and prokaryotes (Kunz, 2013, Cohan, 2002, Fraser et al., 2009) and even more so for viruses (Bobay and Ochman, 2018), largely because of the paradigm of rampant mosaicism stemming from rapidly evolving ssDNA and RNA viruses, whose evolutionary rates are much higher than dsDNA viruses (for review, see Duffy et al., 2008). The biological species concept, often referred to as the gold standard for defining species, defines species as interbreeding individuals that remain reproductively isolated from other such groups. To adapt this to prokaryotes and viruses, studies have explored patterns of gene flow to determine whether they might maintain discrete lineages as reproductive isolation does in eukaryotes. Indeed, gene flow and selection define clear boundaries between groups of bacteria, archaea, and viruses, although the required scale of data are only available for cyanophages and mycophages among viruses (Shapiro et al., 2012, Cadillo-Quiroz et al., 2012, Gregory et al., 2016, Bobay and Ochman, 2018).

I know what "rampant" means in the colloquial sense, and the colloquial form of "paradigm" is familliar as well. Mosaicism usually relates to genetic differences between groups of cells within an individual multicellular organism. I am not sure how it applies to virus populations.

Is it possible to explain the meaning of "paradigm of rampant mosaicism" in this particular context, and give it some background?

As I understand it from skimming the Cell paper and that by Bobay and Ochman, 2018, which it cites, the concern is the validity of the established method of defining viral species. Quoting from this latter paper:

The problem would appear to be that ssDNA and RNA viruses evolve rapidly (rampant is probably meant to convey this idea), but most importantly, not just by acquiring point mutations or deletions, but by horizontal gene transfer from other viruses (and from bacteria).

The net result of this is that such viruses are made up of segments from different sources, some evolved by conventional mutation and others ‘hijacked wholesale’ (my own hyperbole) from other organisms. Another way of putting this is that their genome is a mosaic of genes from different organisms. An example of this is in the diagram below, taken from a paper by Juhala et al. entitled “Genomic Sequences of Bacteriophages HK97 and HK022: Pervasive Genetic Mosaicism in the Lambdoid Bacteriophages”. 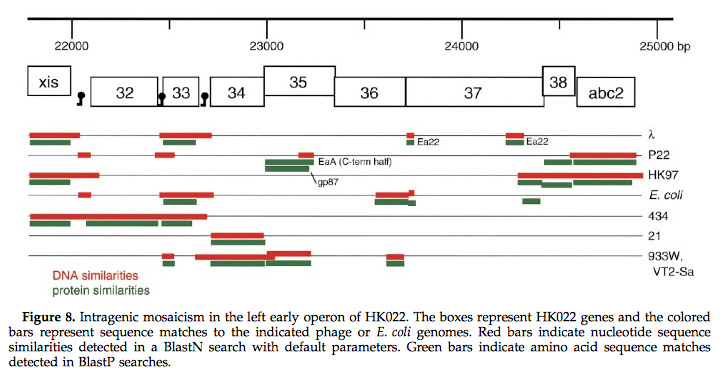 For anyone unfamiliar with the word ‘mosaic’ (or its applicability in relation to genomes) I reproduce below a Roman mosaic from Pompeii. The idea is that what appears as an integrated organism is composed of disparate pieces with distinct boundaries. 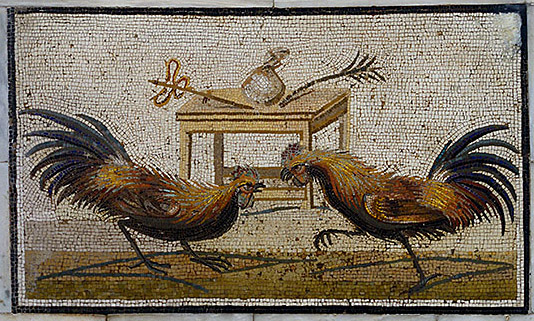 (The protagonists in the mosaic are about to exchange blows, rather than genes. There are also mosaics at Pompeii depicting the latter type of exchange, but these are a little too ‘rampant’ to present here.)

The implications of ‘mosaicism’ for defining viral species is — I imagine — that viruses which could be regarded as distinct species from examining the sequences of the majority of their genes might still be able to exchange genetic material by crossing-over at genes they have acquired by horizontal transfer.

Oh, and what about paradigm? It would clearly be unfair of me to suggest that this is a fancy word that the authors have used to sound important. The Oxford Dictionary online defines it as:

A typical example or pattern of something; a pattern or model.

I think that the authors mean that the viruses provide a good example of horizontal gene transfer.

I don't think this is an answer, but I have been told to write it as an answer by a mod:

it means " ...the standard model of uncontrolled, widespread, pervasive mosaicism..."

Mosaicism mechanisms are probably for another topic, Wiki states that: Genetic mosaicism can result from many different mechanisms including endoreplication, anaphase lag, and chromosome nondisjunction.

Not the answer you're looking for? Browse other questions tagged genetics population-genetics virology genomics or ask your own question.

4
What makes an E.coli an E.coli, genotype or phenotype?
3
Zayed et al. (2022) "Cryptic and abundant marine viruses at the evolutionary origins of Earth’s RNA virome"; expressed sequences or transcribed?