I have some cursory knowledge of serial endosymbiotic cell theory, and find it difficult to consider that the DNA of the former cell — now organelle — would affect anything outside of the mitochondrion itself, although I can imagine the alteration of mitochondrial processes having an indirect effect on non-mitochondrial processes associated with certain phenotypes.

Assuming that I have understood (and reworded) the question correctly, I find the logic strange. It is the disruption of or change in process that produces phenotypic changes following a mutation in the gene, so if the process is critical for life — like those occurring in the mitochondrion are — what difference does it make where it is encoded?

Perhaps the problem is the endosymbiotic theory of mitochondrial origin. Yes, most of us believe that, but, whatever it was millions of years ago, the mitochondrion is an integral part of modern eukaryotes. Extensive changes have occurred, the most relevant to clearing up this way of thinking is the fact that most human mitochondrial genes are now encoded in the nucleus. Would you these genes would be any more or less likely to produce phenotypes on mutation? Hardly.

Now to the facts. There are certainly mutations in mitochondrial genes that are associated with disease in man and hence produce phenotypes. Some are listed in the table below, taken from a review by Taylor and Turnbull in 2004. 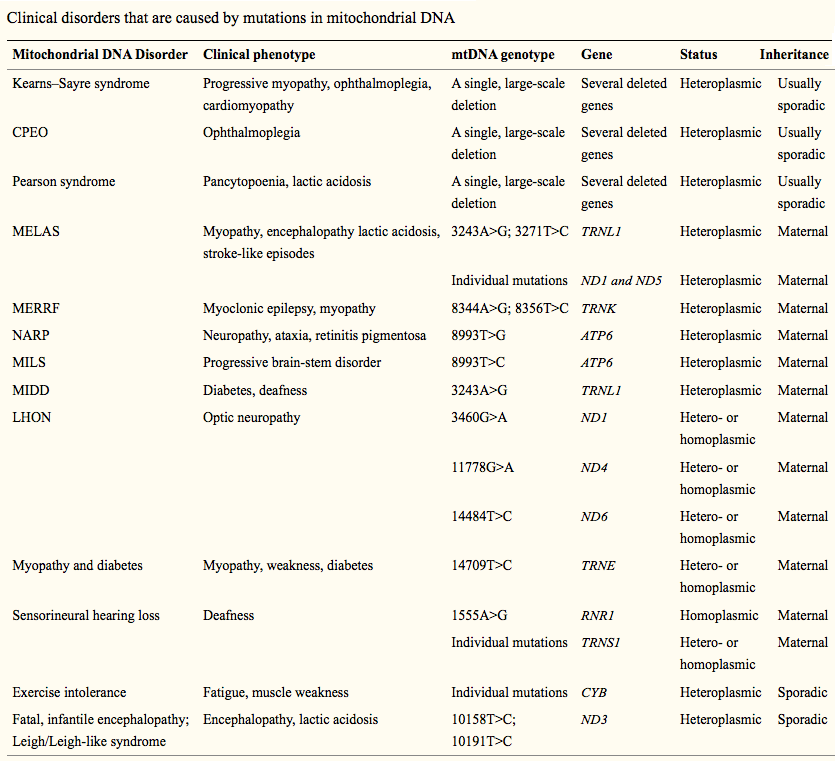 No, it will not necessarily affect phenotype. Of course silent or inconsequential mutations are possible in mtDNA just as they are in genomic DNA.

But, for example: In some cases, inherited changes in mitochondrial DNA can cause problems with growth, development, and function of the body’s systems. These mutations disrupt the mitochondria’s ability to generate energy efficiently for the cell.