My main question is this - I heard Richard Dawkins say in a video that after 1000s of years, any given individual alive today will be either an ancestor to ALL of the humans (in that future time) or none of them. What is the rationale behind this? I'm unable to find the link to that video. I'll keep searching and add it once I find it.

But my fundamental question is perhaps this - is it necessary that a given species must have at least one common ancestor? I understand that there are multiple common ancestors to humans, the most recent one being MCRA. But could it have been otherwise? I think there's some underlying logic that I'm missing.

I'd appreciate it if someone could answer in a non-technical manner since I know very little about genetics and how all this works. 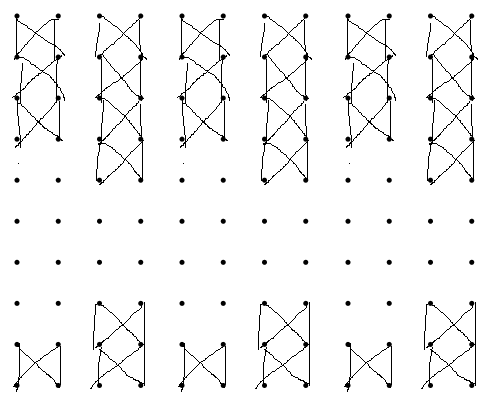 But this is an unrealistic example with no mixing and cross breeding. Let's consider another example as shown below. I want to see how the individual A from current generation can be related to all the population in future. As shown in the diagram, although A is related to everyone in some future generation, he is not a common ancestor to all of them. The actual common ancestor belongs to some earlier generation. 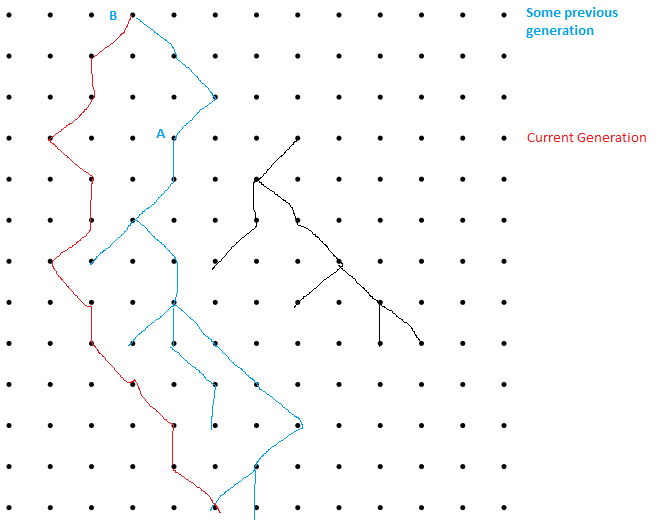 For any given no. of generations, theoretically, I could conceive similar lineages by which someone from current generation need not necessarily be a common ancestor to all of the future population (or none). So I don't understand how Dawkins' statement is inevitable.

any giving individual alive today will be either an ancestor to ALL of the humans (in that future time) or none of them. What is the rationale behind this?

It's a simple mathematical observation nothing more than that.

One that doesn't actually require doing any math to understand.

It's just a simple statement of something that's obvious when you think on it.

is it necessary that a given species must have at least one common ancestor?

The alternative hypothesis is that life evolved independently several times, and there were originally more than one 'tree of life', and that these independent instances of life somehow evolved in parallel, maintaining compatibility with each other, enough so that there could be cross-breeding between the two trees at a later date. In that way it might be possible that some species may not have a single common ancestor. This seems so unlikely to be true though that it it not generally even considered, for current species.

The common ancestor of all humans might not necessarily look exactly like a human (Homo sapiens) though, it may have existed at a time before Homo sapiens evolved, because it is possible that branches on the tree of life can diverge a little and then cross again, as human and neanderthal branches did.

The wikipedia page on the human MRCA (https://en.wikipedia.org/wiki/Most_recent_common_ancestor) says the time since the MRCA is unknown, but has been estimated between 100,000 to 200,000 years ago. This is around the same time Homo sapiens first appeared in the fossil record, that we have found so far.

Not the answer you're looking for? Browse other questions tagged genetics evolution human-genetics human-evolution or ask your own question.

9
What kind of event would cause the current Mitochondrial Eve to be replaced by a new one?
2
How did the Chromosome #2 Fusion propagate?
3
Is there a realistic "family tree" model for the human population?
2
Gradualism vs. Punctuationalism
2
Coefficient of Inbreeding - implementation issue
39
Does it make sense to classify all humans in a single species?
1
Does evolution go only in one direction?
16
Do all living humans literally descend from one ape?
1
Role of epigenetics in evolution and transmission of defects caused by drugs
2
What's the most recent common ancestor of reptiles and humans?