How are haplotype blocks different from genes?

According to Cardon et al. 2003, a haplotype block is

It seems obvious that the parts of the genome that compose genes will have a somewhat similar behavior.

Haplotype blocks may cover more than just one gene.

While positions within a gene are also in high linkage disequilbrium (or well correlated) with each other, this phenomena of high LD may extend beyond the gene body and overlap with the next gene. A good visual representation of this comes from Jeffreys et al. in the figure below: 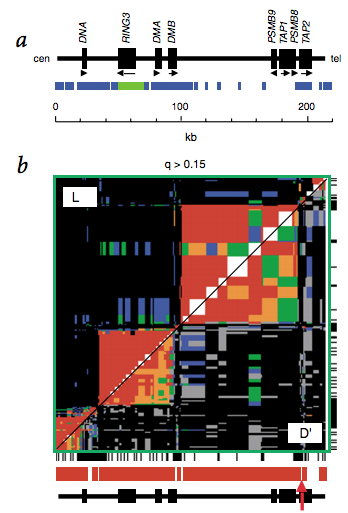 Red means more LD, black means zero LD. Each point in the heatmap is essentially a pairwise correlation between two points in the genome. Therefore regions of red represent regions of high LD or haplotype blocks. Going from left to right we can see that each gene appears to be in its own block of high LD. However, the genes PSMB9 and TAP1 appear to be in the same block. Other examples exist as well, a great source is this review.

Not the answer you're looking for? Browse other questions tagged genetics genomics or ask your own question.

5
How many different protein coding genes are in the Human Biome?
2
How is incomplete dominance different from codominance?
8
How many dinosaur genes are in a chicken genome?
1
Are Protocadherin Gamma Cluster transcripts considered separate genes?
4
Perplexing by the way of estimating the shared or different genes between humans and chimps
1
How many mutated genes from a complementation test?
1
The significance of haplotype blocks