How does the human body extract energy from ethanol?

I was talking about alcohol and obesity with a colleague. I always thought the only cause of that is the sugar that is found in most alcoholic beverages. But my colleague pointed out that ethanol itself provides calories to human body.

I checked that and it seems to be the case. What I don’t understand is how is it possible. On wikipedia I found following statement:

If catabolism of alcohol goes all the way to completion, then, we have a very exothermic event yielding some 1325 kJ/mol of energy. If the reaction stops part way through the metabolic pathways, which happens because acetic acid is excreted in the urine after drinking, then not nearly as much energy can be derived from alcohol, indeed, only 215.1 kJ/mol.

The statement relates to these reactions:

Now note that the wikipedia calls the pathway "exothermic". However, I don’t think that human body can derive energy from heat. Or can it?

Since most articles claim that ethanol alone has positive caloric value, how exactly is this energy extracted and used or stored as fat?

The question suggests unfamiliarity with the nature of biochemical oxidations and their relation to energy transfer in biology. The naïve reader is recommended to consult a text for a coverage of this subject: all I feel is appropriate here is a general summary followed by a brief indication of the key reactions.

General principles of energetic value of and biological oxidation of foodstuffs

The case of ethanol

The question rightly states that ethanol is converted to acetaldehyde and then to acetic acid, but fails to include the oxidant, NAD+, which is an essential participant in the biological reactions:

Thus, two molecules of NADH are produced, providing either ATP or reducing power.

The question assumes that after conversion of the acetate to acetyl-CoA it will be oxidized in the tricarboxylic acid cycle*. However in a fed subject with sufficient energy the cycle is suppressed and the acetyl-CoA will be converted to malonyl-CoA, the precursor of fatty acid synthesis. These processes require both reducing power (NADPH, which can be obtained from NADH) and ATP (ditto): 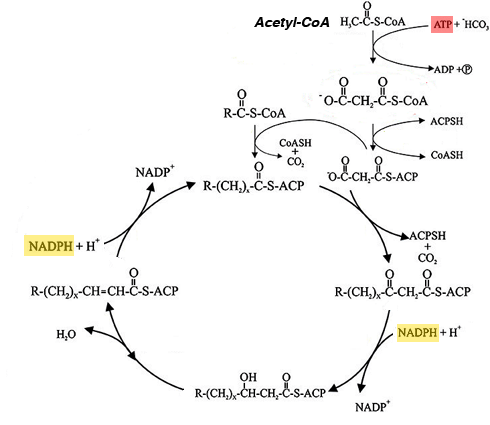 *The quotation states that “acetic acid is excreted in the urine…”. I have no knowledge of what proportion of ethanol is disposed of in this way, but I would imagine it is small — certainly not enough to prevent beer belly. However this is not the main reason why “catabolism of alcohol” does not “go(es) all the way to completion”.

The biochemistry above is covered in Section 30.5 of Berg et al., entitled “Ethanol alters energy metabolism in the liver” (freely available to read online). This explains in more detail why the acetate is not metabolized in the tricarboxylic acid cycle. It does not discuss fatty acid synthesis, as the emphasis is on the more immediate pathological consequences of excess intake of alcohol.

23
How can a drink contain 1.8 kcal energy while 0 g fat/carbs/protein?

8
How does a veggie-less diet affect the human body?
16
How does the human body metabolize gasoline?
4
Can the human body create glucose out of fat?
1
Does the energy from ATP hydrolysis vary among different cells?
0
How does body fat leave your body?
0
Is it possible to stop more/extra fat from being stored in the body?
30
What is the human energy consumption by organ?