Are there any examples of information compression in nature?

As the title suggests, I am looking for any examples of naturally occurring information compression. Initially, I thought protein synthesis was such a form of compression, creating larger entities (proteins) from a small subset of chemicals (A,C,G,T(U) in DNA) via ribosomal translation. However, I was quickly disillusioned as the amount of information contained in DNA is not increased within proteins after their formation.

So are there any natural processes, whether in animal, plant or otherwise that exhibit information compression?

Many of the posts to this list about biological information (usually equated to DNA) from mathematical and informatics scientists start from what I regard as false premises, especially that the genome is similar to that man-made artefact, the computer. This post does not explicitly make that assumption, but I think it important to address the difference between computer systems and biological systems before considering possible examples of what is requested.

Although one can argue that not all biological information resides in DNA (or RNA, in the case of organisms with an RNA genome) I suspect the poster was thinking of that, and that is what I shall restrict myself to — i.e. to genetic information. (Other answers may quite validly address other types of information.)

The point, at least historically, of compressing digital information on computers is space limitation. Lossless compression involves re-coding the information in a more compact form. For example, instructions in the PostScript language can substitute ‘d’ for draw, ‘s’ for stroke. Gif or tiff image compression can substitute 20x(256,0,0) for repeating (256,0,0) — a red pixel — twenty times. Such compressed information must generally be decompressed when it is used (e.g. when the gif file is displayed in a web browser).

I find it difficult to think of any compression/decompression of this type in biological systems, and I would point out that genome ‘space’ is generally (but see below) not a limiting consideration in biological systems. One example of this is the fact that many organisms (especially plants) are polyploid — that is they have multiple (apparently unnecessary) copies of the complete genome. Another example is that the genomes of mammals contain at least some DNA that can be regarded as unnecessary. Although there are arguments about ‘junk’ DNA having a function, it is difficult to argue that processed pseudogenes and SINES and LINES are necessary. However genome ‘space’ has not eliminated them.

Where space or size is a problem, there Nature often uses other solutions than compression. For example the genomes of RNA viruses are thought to be restricted in size because of the occurrence of slow non-enzymic alkaline hydrolysis of RNA. Influenza virus, for example, has a genome consisting of several shorter (less vulnerable) RNA segments, which may be considered as a solution to this problem.

However, here are a couple of possible examples, although not with the sort of compression used in computers.

To put it in simple terms, the genome has the potential for expressing millions of different antibodies, but the immune system requires that antibody-producing cells only produce one type. Instead of having millions of antibody-producing genes, only one of which is expressed, there is a much smaller number of segments of the genes, from which each of the two antibody chains are combined in a process called recombination. This is illustrated below for the heavy-chain genes where combination of one of 250 V-regions with one of 20 D-regions with one of 4 J-regions, giving 20,000 possibilities. The resulting heavy chain can combine with one of 1000 different light chains, giving twenty million possibilities. (The diagram and data are old, but the principle holds. See, e.g. the Wikipedia entry.) 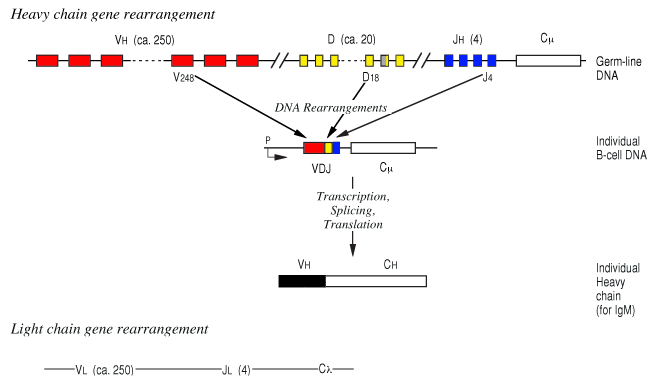 This is similar in principle to the first example, although the mechanism is different. Most of the protein-coding genes of higher eukaryotes are built up of two components — exons, which encode sections of the protein product — separated by introns, which do not. Both these components are present in the initial RNA transcript, but the introns are removed from this (spliced out) to produce the mature mRNA, which is translated into protein. An advantage of this arrangement is that there are alternative ways for the splicing to occur, involving removing some of the exons (as well as the introns). This can lead to different protein products, in some cases just two, in others dozens.

So one could regard this similarly as a compression mechanism — or alternatively as an example of wasted space in the genome occupied by the introns.

Certain mature mRNAs have the potential to encode more than one codon by the processes of read-through or frame shift. In brief, a protein of 100 amino acids will have a mRNA with a stop-codon 300 nucleotides after the signal for the start of translation. However in a few cases (and most notably with small bacterial RNA viruses) the structure of the mRNA near the stop codon is such that in a certain percentage of cases a tRNA will misread the stop-codon, resulting in continued translation, producing a longer protein of different function.

Similarly, certain mRNAs have a structure at a certain point that encourages the tRNAs to continue reading in the wrong phase (missing a base or starting a base too early — I forget) so that the continuation of the protein has a completely different amino acid sequence.

There is an old review of this topic in Current Opinion in Cell Biology.

Although this is technically a way of compressing two proteins into one, its rarity makes it difficult to regard its biological rationale as being compression.

No doubt there are more examples. I had toyed with considering Wobble as a way of saving space for tRNA genes, but have probably written enough.

Not the answer you're looking for? Browse other questions tagged information or ask your own question.

4
Is there a way to measure the amount of bytes that are possible to encode in a DNA molecule?
1
Are there more true codes found in biology besides the central dogma?
4
How do ascending neural pathways filter unimportant information?