Do birds grieve and feel emotion?

Crows are surprisingly clever with tool making/use and even understanding displacement water over sand! Clearly there's some relatively high level cognitive processes going on up in those avian brains.

When I stumbled across a video of what appears to be a bird grieving over its mate (shown in clip below), I wondered how far animal emotion and psychology goes.

Your "grieving bird" is a video of a peregrine falcon (Falco peregrinus) and its (nearly?) dead chick on a hot summer day in Phoenix, Arizona (USA) in 2016. 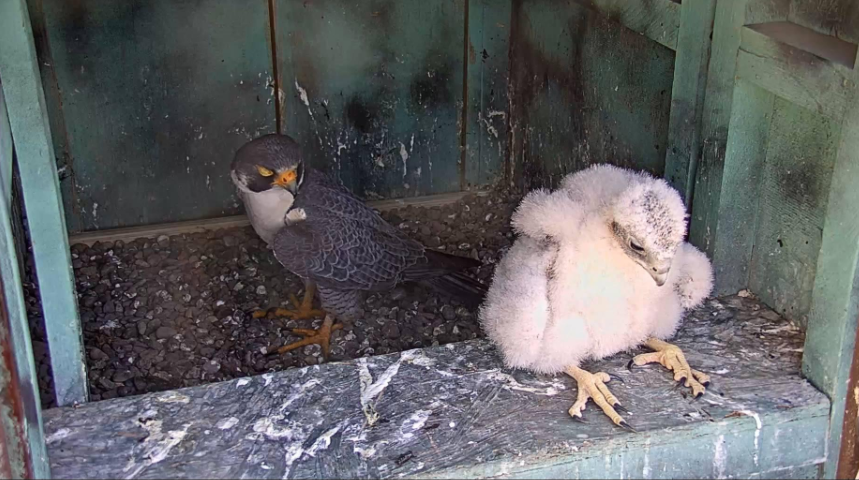 The video is from a nest camera webcam set up in the Maricopa County building in Phoenix, Arizona by the Arizona Game and Fish Department.(See this video for more information). The camera was active in 2016, but according to here the falcons did not return to the nest in 2017. Your video shows one of the adult birds with the only chick that hatched (out of 4 eggs) in 2016. That chick died from a combination of heat and an 8-story fall in June 2016 [Source]. Your video is an edited and audioless version of a video capture of the live stream that can be seen on Youtube. The information for this video indicates that the adult bird in view is the father.

The adult falcon in the video is not wimpering, crying, or grieving. Instead, the bird is trying to cool down on a hot day. He is displaying a familiar temperature regulatory behavior: panting.

Most birds pant when subjected to heat stress...

In fact, in the more complete video I link to above (with audio), you can clearly hear the bird making panting sounds while breathing heavily. The falcon also spreads out its wings to better help cool himself down toward the end of the video as it cares to its injured chick.

You can see another video of a panting falcon in New Hampshire (USA) here, and you can find more information about panting, gular fluttering, and other thermoregulatory behaviors in birds here, here, and here.

Most animals have some shared reactions to anti-stress drugs and painkillers, for example it has been proven that lobsters react to the same painkillers as humans in response to stimuli.

Birds are much closer and have a lot of shared characteristics with humans, fear, heart rate changes, adrenaline, stress. There are many studies about general stress, for example: https://www.pnas.org/content/early/2017/06/06/1706164114

That doesn't mean that birds form strong bonds with their children. Penguins have been observed to nurse and prod frozen babies to try to revive them. Complex social emotions have not been strongly proven with most animals, mostly primates, dogs, elephants. Parrot owners will tell you that paired parrots often mourn, lose appetite and die, after their partner dies. They also try to defend their babies with agression. So we can't rule out that birds have parasympathetic nervous reactions similar to our own. humans bite their nails, birds pluck their feathers! https://www.thesprucepets.com/do-birds-get-depressed-390405

You should check this TED talk, about animal psychology: https://www.youtube.com/watch?v=-wkdH_wluhw

There seems to be a long folk tradition that birds do grieve:

“All the birds of the air fell

when they heard the bell toll

9
Birds placing sticks on train tracks?
29
Where do migratory birds go when it rains?
2
Large congregation of birds?
5
Can birds raise younglings that are not their own?
14
Where do birds and squirrels go to die?
1
Why so fewer birds in the yard come late summer and early autumn?
2
Polyandry in birds
4
Do some birds really clean themselves using wet leaves?