What is it called when a dead flower is rotted away and only the veins remain?

I've spotted a flower that is dead: 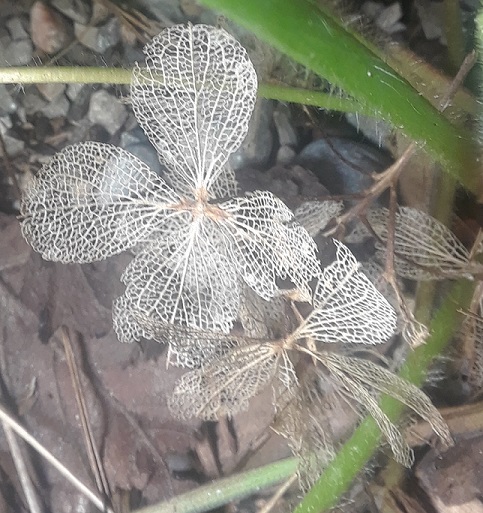 It looks like most of the tissue has rotted away and only the veins remain.

(Sorry, I don't know the proper name for flower veins).

What is the technical term for this phenomenon?

Retting could be a valid term. But I think that the term "skeletonization" is more common. For instance here is a link to the University of Arizona showing how you would take a flower or a leaf and remove all components, leaving the veins: Skeletonization

I think that "retting" is confined to the industrial harvesting of plants like flax. I would use the term "skeletonization" to include acts of botanical science in which the veins alone were sought. For instance in the above link the botanist Frederick Ruysch published a method of chemical skeletonization in his book Adversariorum Anatomico - Medico - Chirurgicorum Decas Tertia in 1723.

It also became a form of art and craft in the late 1800's in the United States; "Skeleton Leaves & Phantom Flowers" was published by E.Parrish. I would assume that the end result as a craft would be to display the skeletonized flowers or leaves on a display board.

As a natural, observed event the term skeletonization could be used. But if the underlying causes such as fungus were considered then both rot, or fungal rot, and skeletonization might be used together in the same sentence. The wikipedia entry skeletonization considers animal decomposition. It's a reasonable and analogous step to use the same term for plants that decompose and leave fibres rather than bones.

Snack_Food_TermiteSnack_Food_Termite
27011 silver badge88 bronze badges
$\endgroup$
2
Add a comment  |
1
$\begingroup$
Want to improve this post? Provide detailed answers to this question, including citations and an explanation of why your answer is correct. Answers without enough detail may be edited or deleted.

I have heard the process that leads to this called retting.

Not the answer you're looking for? Browse other questions tagged botany terminology decay or ask your own question.

3
What is the difference between clinical and non-clinical depression, and is there a term for different severity of the bipolar disorder?
4
Cause of Crease in Drupe Fruit
19
Why do pink rain lilies flower only after rains, and not from being watered?
0
Is "cell proper" considered a biology term / well defined concept?
6
Help ID this plant, quite possibly a weed
15
Spruce growing high up in a maple trunk: Can a partially rotted trunk completely sustain another tree?
11
What predates on cactus in the Atacama desert?
3
What type of wildflower is this?
0
What is the proper anatomical name of the "band of Richer" that wraps around the quadriceps femoris?