How does a ribosome move along mRNA?

I've been reading around Wikipedia recently trying to learn more about various biomechanisms. I’m intrigued by ribosomes — with how small they are, they’re basically chemical machines from what I can tell. I’ve got the general idea of what they do, which is nicely illustrated in the super common GIF below:

My question is how this happens, on a molecular/chemical scale. Even in the GIF, the way the mRNA is being so mechanically fed through the ribosome at the exact-right times seems so deliberate, and I can’t imagine a chemical process that does this so well. It seems like we know the exact protein by protein structure of a few types of ribosome; as such, I naively assume we can work out exactly why and how it does each thing it does. I’m sure it's not a simple question — if it's not really answerable in a stack exchange question, then I guess my question becomes where should I read to learn this.

It is not clear to me that requests for references are on-topic here. In general I would think not, as they are subjective and not about biology per se. I therefore solicit neither votes for, or acceptance of, this answer. I would have used the comment area to provide references, but there isn’t really enough space, so I decided to flesh it out into what follows.

The main concern of the question is the movement of mRNA during translation, so I shall focus on elongation (rather than initiation). Most of our detailed knowledge of the ribosome is based on static ‘views’ of the ribosome at different stages, although there is a paper (reviewed in Nature by Ehrenberg) in which the dynamics have been deduced from millions of time-resolved electron microscopy images. I doubt whether that is what the animation in the Wikipedia article is based, however.

After an introduction to the subject from Wikipedia, I strongly recommend graduating to a good text book. Text books have the advantage over Wikipedia that they are comprehensive, integrated, professionally illustrated and sent out by publishers for review. Berg et al. is probably as detailed as you will find in a general text, the 2002 edition is available online (as are others such as Alberts et al. and Lodish et al.) through NCBI Bookshelf. 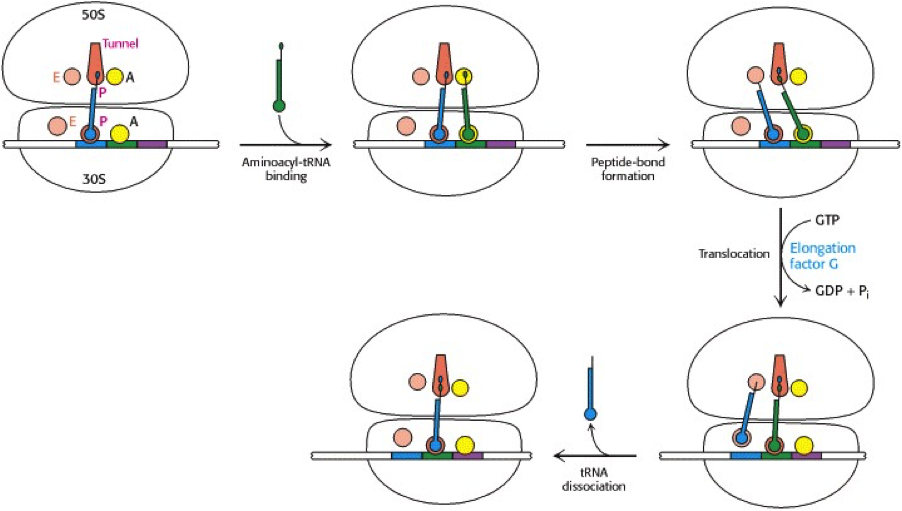 You need the associated text to understand this properly, but the step at which the mRNA is thought to move with respect to the ribosome is the penultimate one in the diagram: translocation.

Unfortunately you can’t just read through books on NCBI Bookshelf — you have to search for particular topics. But Chapter 29 of Berg et al. is what you need, and the links to the relevant sections are:

How exactly does the mRNA move?

The details of the individual steps in protein synthesis are being deduced from examination of high-resolution structures of complexes at different stages. For the student who as able to go beyond the accounts in general textbooks, a review such as that published in 2009 by Schmeing and Ramakrishnan is perhaps the next port of call. But, chemical virgins beware, this is structural biology, and there is no simple answer that you can scribble on a table napkin!

Not the answer you're looking for? Browse other questions tagged translation ribosome or ask your own question.

25
What is the criticality of the ribosome binding site relative to the start codon in prokaryotic translation?
8
RNA or ribosome, which one moves during translation?
9
How was the first ribosome theorized to have been made?
2
How are the correct tRNAs transported to the ribosome?
3
Identification of proteins in this animation of a ribosome translating mRNA
3
How is mRNA directed out of the nucleus to its ultimate cytoplasmic location?
1
Is there an Exit site (E-site) on the eukaryotic ribosome?
1
Do ribosomes read mRNA?
2
How does a ribosome gather tRNAs at a fast enough rate for Translation?
5
Does the ribosome have protein kinase activity?