is this a brown recluse spider?

What kind of spider is this? SE Michigan, light brown color, second picture less focused but w tape measure for scale. Thank you! 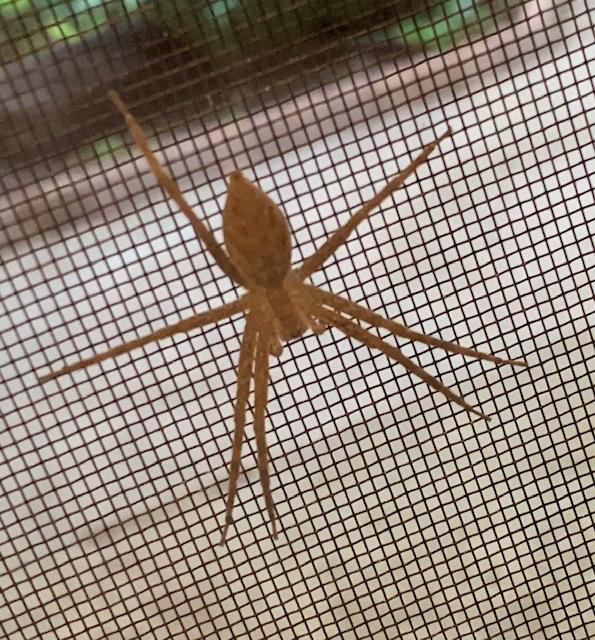 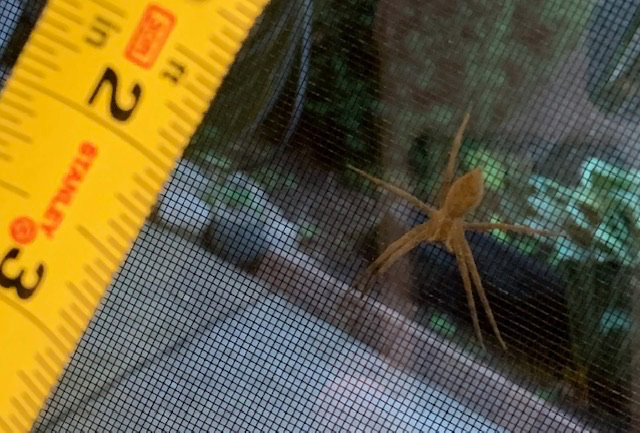 No, this is not a Brown Recluse. There are several reasons for saying that, among them the fact that it's outside; it's hanging on a screen, and it doesn't look at all like a Brown Recluse - (Recluses don't have a rectangular cephalothorax "head end", and they have a bulbous abdomen, not that pointy-ended one this spider has). As for what it is, there are some good clues - first that rectangular-looking cephalothporax. That's pretty unusual in spiders, although it's not actually rectangular; it's just the central dark pattern is very blocky. Then, look at that color - kind of a creamy light mahogany rather than a real brown, and no darker/lighter patterns that the bigger wandering spiders that look like this would have. Finally, look how it's holding its legs - both the front pairs are close together. That's something you tend to see in two sorts of spiders - the big Argiope orbweavers, and the big Fishing Spiders and their relatives. Argiopes have a different body shape, pattern and color than this, and it would be a little unusual to find one this size hanging around not in a web. Fishing Spiders are generally dark-colored, and with more patterning than this, but there is a close relative that fits this image: the Nursery-web Spider, Pisaurina mira. Here's the Bug Guide page, and a representative photo: 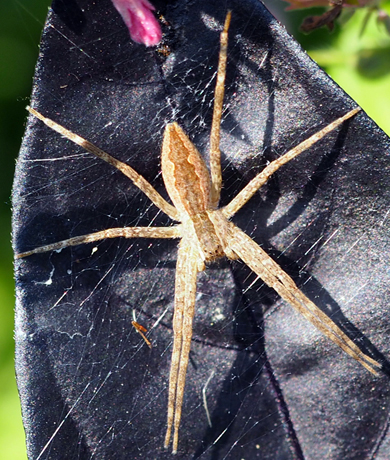 Not the answer you're looking for? Browse other questions tagged species-identification zoology arachnology arthropod or ask your own question.

5
What species is this large-ish spider?
7
What is this spider?
9
Spider identification
6
What kind of spider is this (reddish spider)?
3
What is this spider? Two black stripes
1
Spider identification: male black widow?
3
Identifying a spider from coastal Virginia
0
Is this a common garden spider?
1
Identifying a spider very similar to a brown recluse