Why are mammals the only animals with pinnae / outer ears?

Yes, I know owls have feathery "ear tufts", but these are less suited for hearing and more for display.

And I find it hard to believe that animals like dinosaurs or other cursorial archosaurs would not rely on sound as much as a mammal would. It's just too useful of a sense.

One potential clue is the fact that most non-mammal tetrapods appear to use electrical tuning to discern different sounds, whereas mammals use the hair cells of their longer cochlea to mechanically discriminate sound. I feel like this is related but not completely connected to why a fleshy outer ear structure that can collect and focus in on the direction of a sound.

Why did the pinnae evolve in mammals and why are they the only ones with such a structure?

The mammalian ear is unique and highly sensitive with a built in amplification system that means even minute changes in sound can be detected. The bony amplification is also the reason the mammalian (or at least therian) cochlea is huge, every incremental increase yielded markedly more information, it has to get quite large before you hit the point of diminshing returns. This means mammals can get a lot out of even small investments into improving hearing. The vast majority of other groups just would not get any benefit from an external ear. their ears are not sensitive enough to gain anything the faint echoes external ears collect. The one group that would get some benefit (owls), has something functionally similar to an external ear. 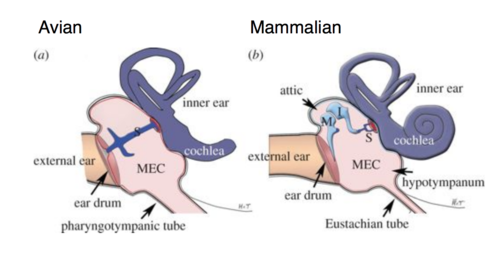 The mammalian ear evolved from the repurposing of vestigial jaw bones no other group had (or more correctly they did not become vestigial in other groups). Mammals are the only group with a single bone in the lower jaw. it is a fascinating story and well worth a look. It kinda makes up for how awful mammalian eyes are.

A Lizard would need ears of 8cm to focus it's upper hearing range.

Also, the distance in between the two ears of i.e. a bird is less than the wavelength of the sound that they detect, so they have less sense of which direction sounds come from.

Cats and mice can hear sound waves of about 0.5cm, so their ears can augment and focus the sound efficienty and can also shield the ears so they just hear one side each.

Soft materials absorb sound, that's why audio speakers use carbon fiber and other rigid diaphragms to transmit high frequencies, and that's why toast has higher frequencies than bread, so mammals had to use the stiffness of articulated bones to pick up high frequencies of sound. It's a complex adaptation step, a bit like the evolution of the eye.

Here is a vid about mammal ears the wiki.

Early mammals were nocturnal, it may be a contributing factor.

Not the answer you're looking for? Browse other questions tagged evolution hearing palaeontology or ask your own question.

2
What terrestrial trait makes cetaceans so successful in an aquatic lifestyle?