Why are there two abrupt changes in the genome sequencing price curve?

In the price curve of the genome, from NIH: 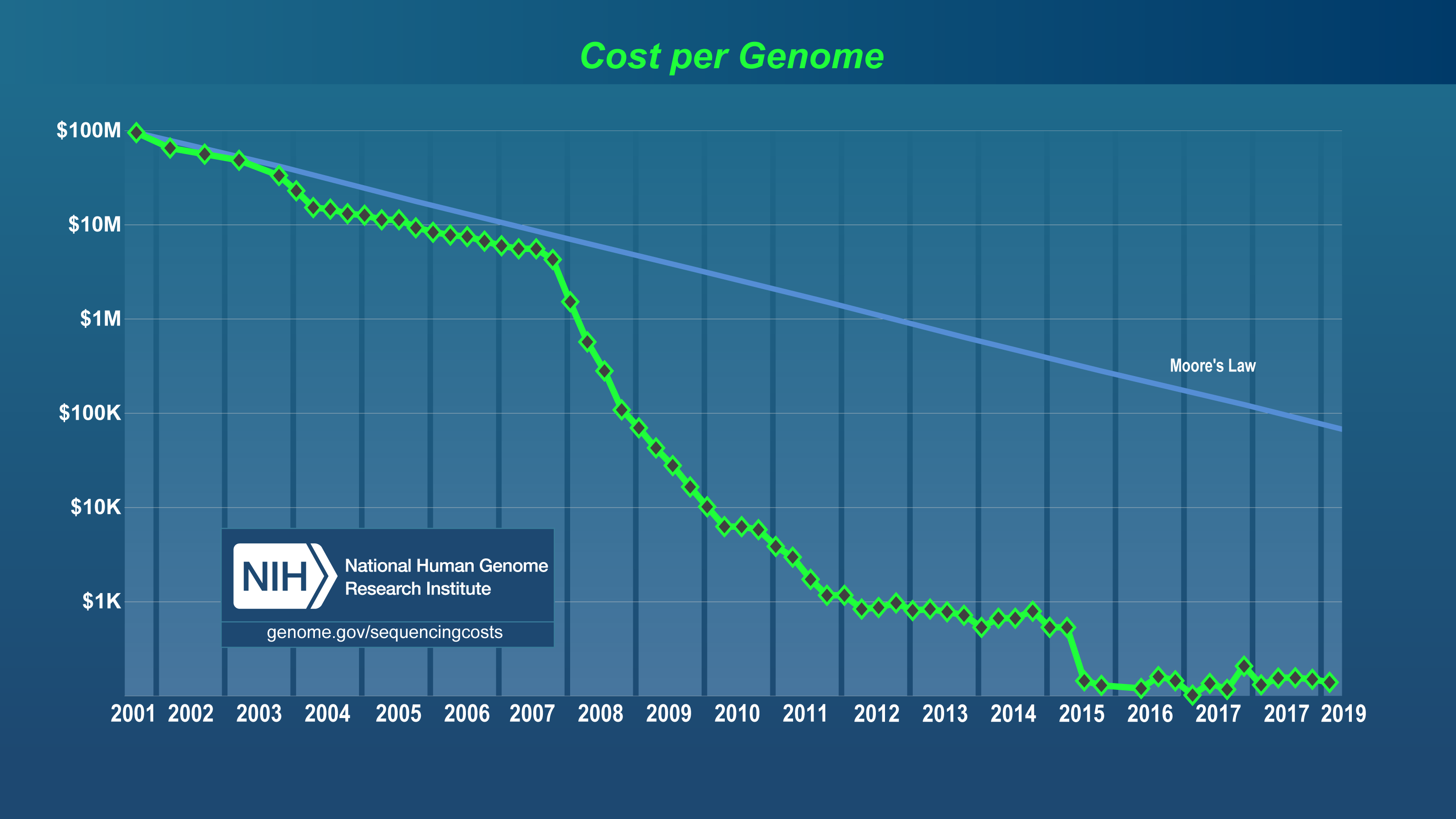 The NIH did not give any details as to why there was a similarly precipitous drop in 2015, or why there was such a saddening (for me!) plateau after that. Please explain them to me?

This graph from the Broad's Opinionome blog (ugh) is somewhat more annotated: 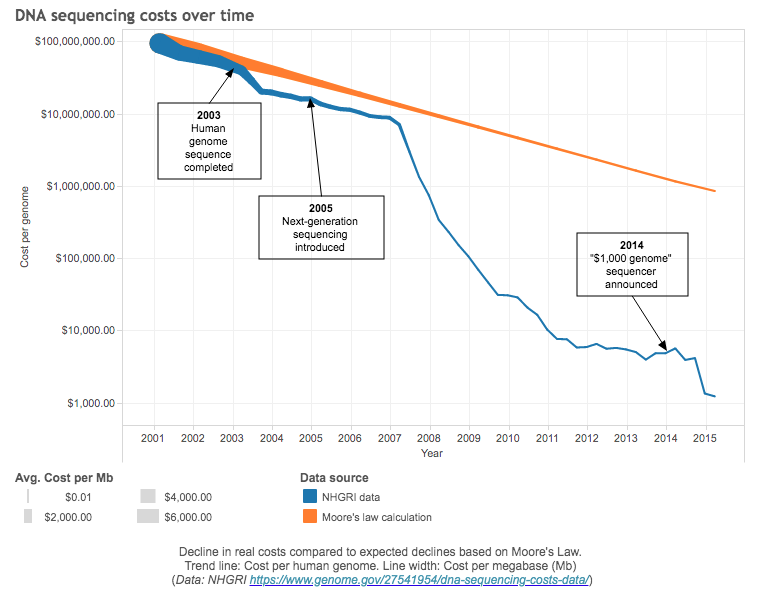 As noted elsewhere, the precipitous drop in 2007 is almost certainly due to maturing next-gen sequencing (NGS), in particular Illumina. Illumina acquired Solexa in 2007, which offered gigabase-level sequencing ability. In 2014, President of Illumina Francis de Souza essentially said as much:

During the EmTech conference, De Souza said Illumina’s success was due to a “hard pivot” the company made in 2006, when it got into the DNA sequencing business by acquiring Solexa, a U.K. startup, and bet its fortunes “on a technology with no sales, that no one knew if it would work.”

Essentially, by 2007/2008 you had stellar technology+company hard-selling it = adoption

I'm less certain about the less-dramatic drop in 2014/2015, but I agree with Franck that it's likely largely be due to the introduction of the Illumina HiSeq X Ten in early 2014. You can read some corporate spam, but it was indeed a big deal. There were other technologies that probably played a role (new PacBio system released in 2013, etc.) but Illumina was and is top-dog.

None of this takes into consideration increased interest in such research, or the faster computers, larger SSDs, and expansion/normalization of multi-core systems that makes working with such data easier.

The graph is in contradiction with the data in the Excel spreadsheet the same webpage provides (https://www.genome.gov/sites/default/files/media/files/2019-06/Sequencing_Cost_Data_Table_Feb2019.xls (mirror)), which I plotted below: 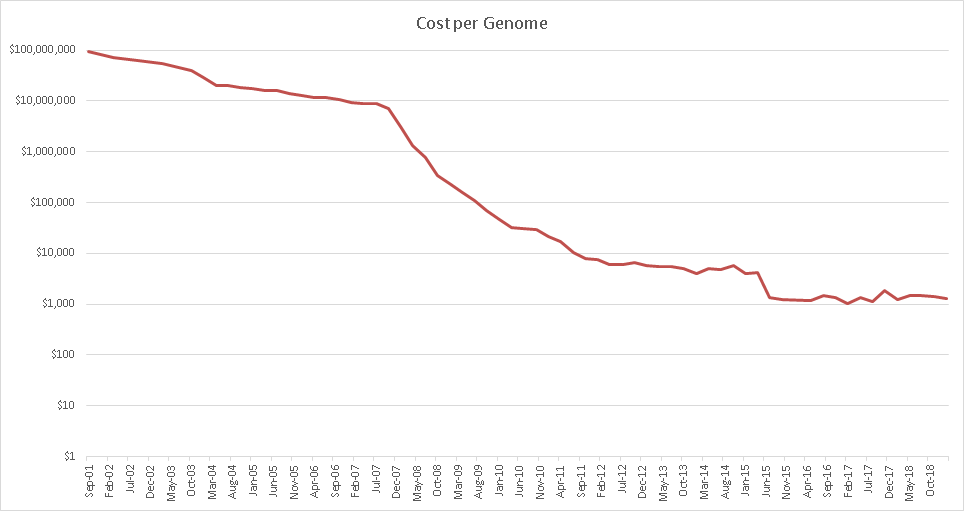 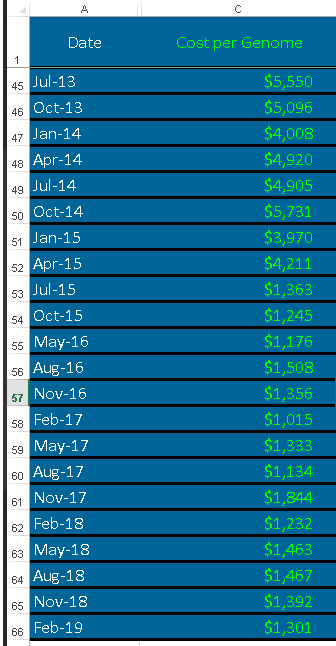 Update on 2019-11-17: I contacted wettersk@mail.nih.gov and the graph on https://www.genome.gov/about-genomics/fact-sheets/Sequencing-Human-Genome-cost is now fixed: 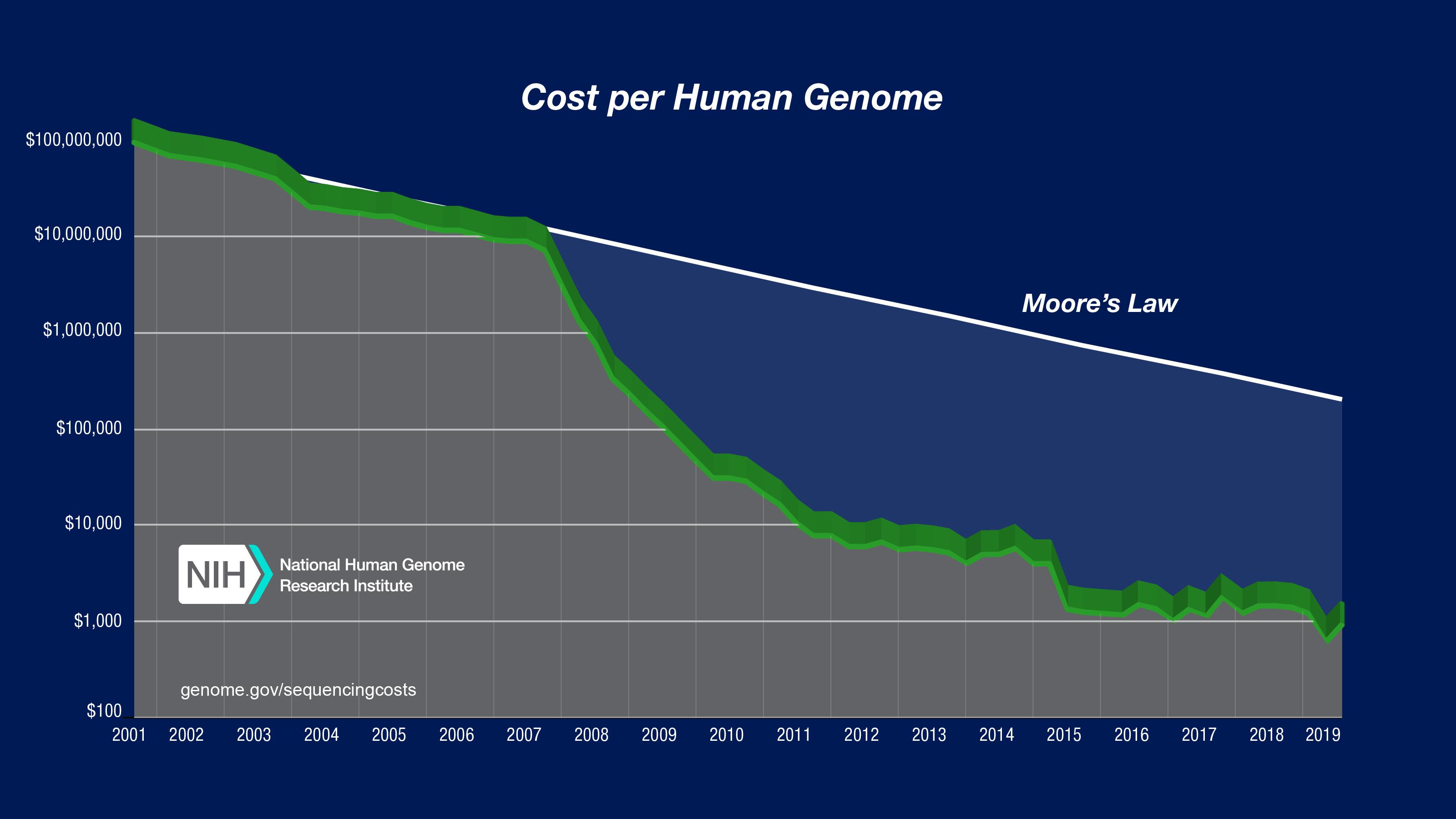 https://en.wikipedia.org/w/index.php?title=\$1,000_genome&oldid=902062326#Commercial_efforts to some of the dates on the reaching the 1000 USD/genome goal, and doesn't indicate any plateau:

In January 2014, Illumina launched its HiSeq X Ten Sequencer, claiming to have produced the first \$1,000 genome at 30× coverage. Some researchers hailed the HiSeq X Ten's release as a milestone – Michael Schatz of Cold Spring Harbor Laboratory said that "it is a major human accomplishment on par with the development of the telescope or the microprocessor". However, critics pointed out that the \$10 million upfront investment required to purchase the system would deter customers. Furthermore, the \$1,000 genome cost calculation left out overheads, such as the cost of powering the machine.[25] In September 2015, Veritas Genetics (co-founded by George Church) announced \$1,000 full-genome sequencing including interpretation for participants in the Personal Genome Project.[26] 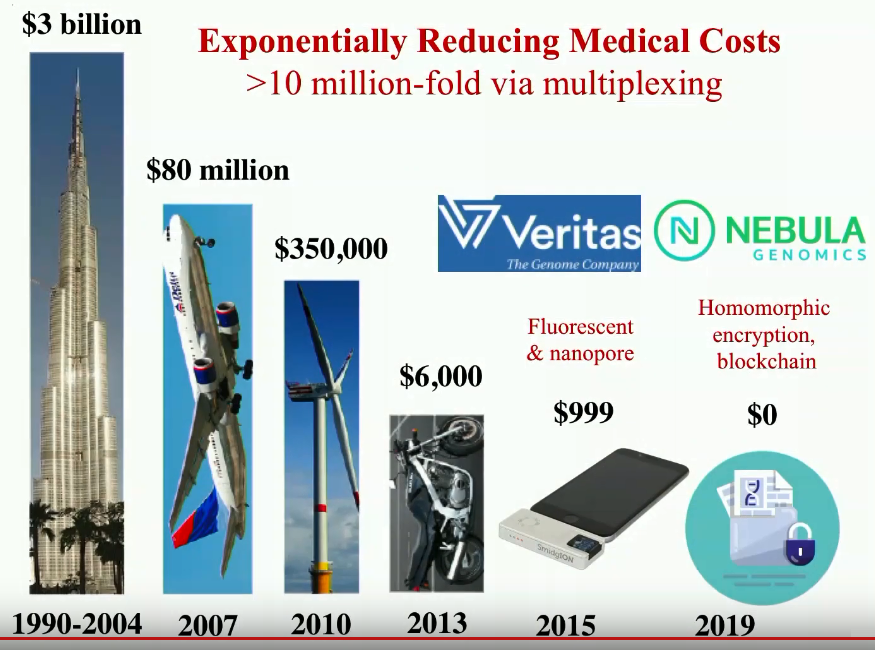 I'm not 100% sure, but I think Illumina launched their HiSeq machine around that time, massively increasing the sequencing output in one run. That dip might be related to that.