Is this spider venomous?

I found this spider in bathroom. Just wanted to know more about it.

Your spider shows an apparently large size, a large round cephalothorax, with smaller and thinner abdomen, very long and sturdy legs, with a long 'foot', and is a general brown color, with some darker markings on the legs. This is consistent with one of the larger varieties of spider found in the warmer areas of the world, and trading under the name of Huntsman Spider, or Giant Crab Spider. There are a number of species of these spiders in the family Sparassidae. As it happens, the most common variety of Huntsman, Heteropoda venatoria, is found pretty commonly in southern India (reference link example included: http://www.southindianspiders.org/south-indian-spiders2.htm ), and I'm quite confident that this is what you have there. Here is an example, from the US website Bug Guide, of this species: 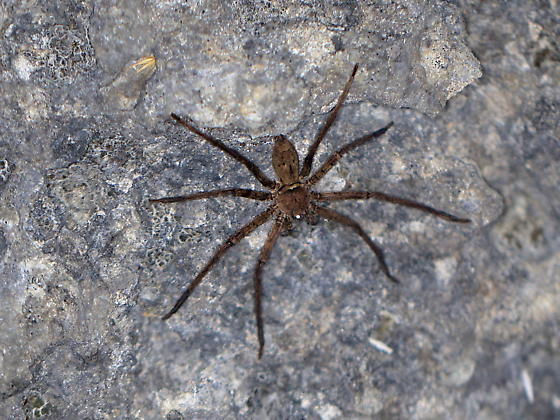 Like almost all spiders, this spider is venomous, but like almost all spiders, its venom is not particularly troublesome to us humans. A bite from a spider this big would be moderately painful simply from the large fangs, and the venom doesn't appear to usually add too much to it. Here's a short but amusing discussion of such bites, from an Australian website: http://sciabc.us/IL2pR

These are sort of the spider equivalent of Geckos - commonly foraging in human homes for the various critters that like to make pest of themselves (cockroaches, mice, etc.) - but they never try to sell us insurance.

I don't know the species (could be a wolf spider), but I am certain they are not dangerous. I have seen these all over my bathroom, dining room and bedroom before. They are all over in South India. No one in my family seamed concerned by them. I am quite certain I even had one crawl on me once.

5
Species Identification: Spider
13
What spider is this? Is it dangerous to humans?
5
Which colourful insect is this?
4
Which spider is this? Is it dangerous?
1
What spider species is this?
3
Spider found in bathroom can’t identify
4
Is this a venomous (poisonous) spider?
6
What species is this fast-moving spider?
0
What is this lightning-fast tiny spider?