What species of wasp is this? And how to get rid of them? 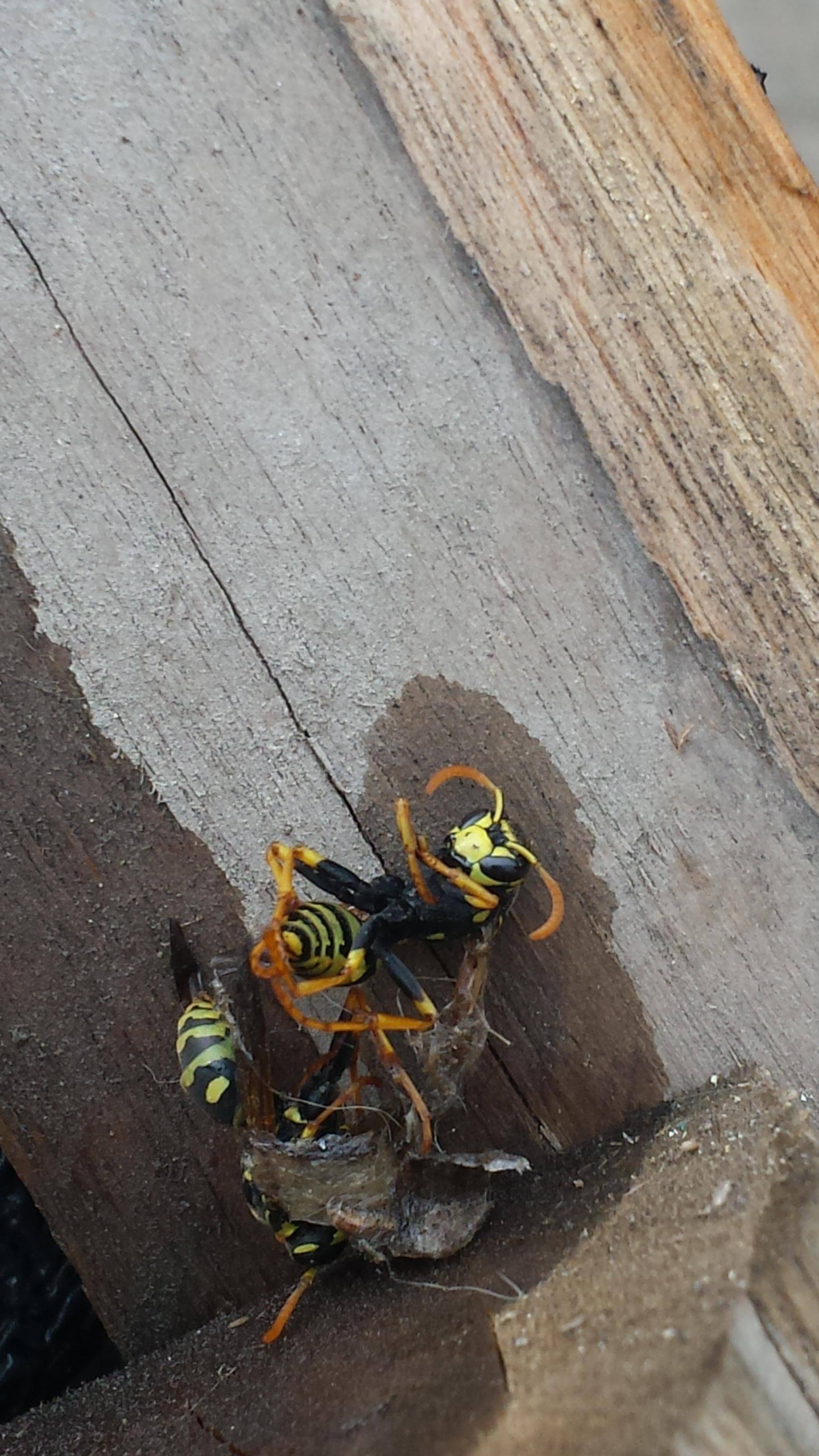 Yesterday while moving a chair in my garden I got stung by a group of wasps. During the night I went hunting for their nests and managed to neutralize 3 of them: one was in the chair's legs, about the size of a child's fist and with a dozen on them inside. It was made of grey hexagonal cells, similar to paper in appearance. 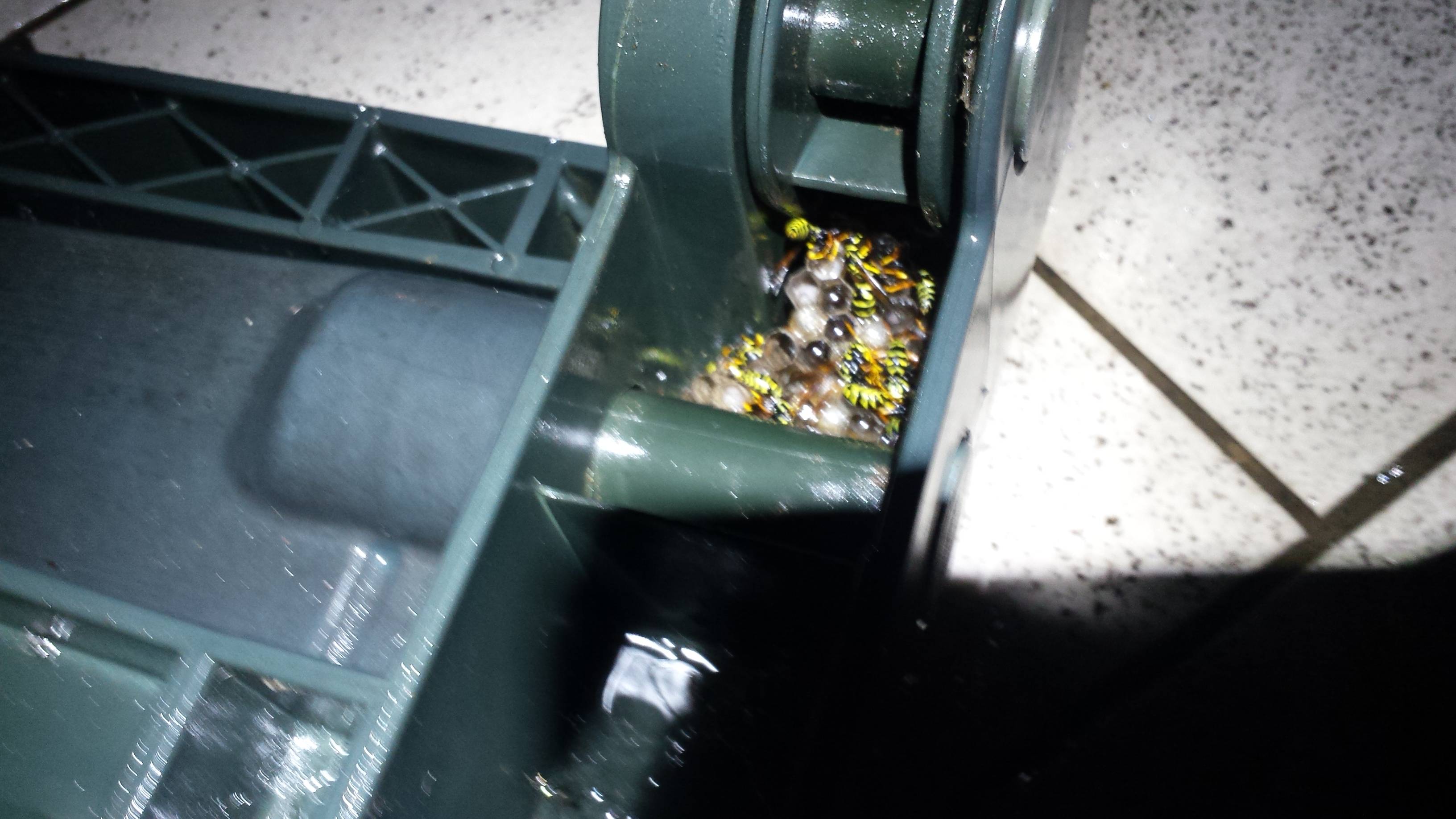 (Sorry for the blurry image, I was a bit scared :-P)

Then I've found another one in a water hose tube that was slightly smaller, but quite active.

And finally a third one in a vase, it was very small, only had a couple of cells in it and wasps were working on it, almost as if they were building it from scratch.

Given the number and size of the nests I'm afraid that they could be spreading in the garden. I have already noticed that a couple of them survived the massacre of last night and I'm worried that unless I kill every of them they might keep nesting.

I don't know much about the hierachical society of wasps, but I was not able to identify the queen (although I haven't checked every single one I've killed). Reading online I've found that killing the queen might mean that the worker would eventually die.

So what kind of wasp is this? What can I do to make sure that they do not keep bothering me?

EDIT: by the way, I live in northern Italy

These are European paper wasps.

(They look very similar to yellowjacket wasps but you can notice the antennae; they are brown here whereas they are black in case of yellowjackets. There are other subtle differences too.)

See this post on Gardening & Landscaping stackexchange about getting rid of wasps.

(This part is probably not really on-topic here and I don't want to copy-paste an existing answer in another stackexchange site.)

Stay vigilant. As you've noticed, once wasps get established in an area, they'll reproduce and spread out. Continue to watch for and eradicate nests. Hardware stores will sell a variety of chemical sprays, but a mix of liquid soap (dish detergent) and water works just as well.

Use wasp traps to prevent wasps from establishing new nests in your area. You can buy them from most stores or make them yourself using directions similar to those provided here: https://www.bobvila.com/articles/homemade-wasp-trap/.

To keep these pests away from your house and other areas, on the underside facing up use a sky blue paint, along soffits, including the bottom of some patio furniture. When these see the sky blue they think its the sky and will go some place else to build a nest. It's a common practice down in the South such as NOLA or other Southern places.

Not the answer you're looking for? Browse other questions tagged species-identification entomology pest-control wasps or ask your own question.

9
What wasp like insect breeds in clay pots with dead spiders?
2
Are wasps attracted to a sting
5
What is this (seed/berry)-like object and where is it coming from?
5
How can I measure bee and wasp population?
4
Identify caterpillars and, if possible, parasitoid (Sabah, north Borneo)
3
What insect could this be?
3
What moth is this and how do we get rid of them?
1
Large Alpine Hymenopteran Seen in the White Mountains