How to interpret different results from Clustal Omega and Multalin?

I have been working on aptamers, which are nucleotide sequences. They bind to various targets, in my case a particular cell surface receptor. The people associated with the project performed SELEX and they have selected sequences that have affinity for the target. My advisor believes that the sequences could share a particular binding pocket (consensus sequence).

The sequences are mostly 40 nucleotides long but some of them are shorter or longer in length. I have to aligned the sequences in an attempt to identify sequences containing a consensus site. So far I have used both Clustal Omega and Multalin, but the results from them are pretty inconsistent. 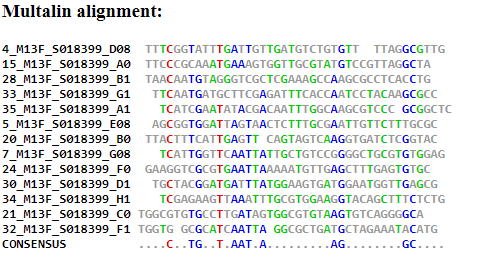 I also aligned a few sequences using a pairwise alignment method, but I found few similar regions among the sequences.

How do I interpret these results from Clustal Omega and Multalin?

Browse other questions tagged sequence-analysis sequence-alignment or ask your own question.

0
Marker validation using transcriptome and genomic sequences derived from a single cell
1
How to Determine the Most Conserved Sequence from BLAST Result?
1
How to interpret Percent identity matrix created by Clustal Omega?
0
why and how multi allele gets reported during variant calling in vcf?
3
Why do I get cytosine to guanine/adenine transitions in bisulphite treated sequences?
2
What is the relationship between a "main" strain genome and its variant genome in archaea?