Relationship between membrane current and voltage in neurons

Depolarization of neurons leads currents of different magnitudes flow in or out of the cell, and the Sodium and Potassium currents can be separately plotted (Purves): 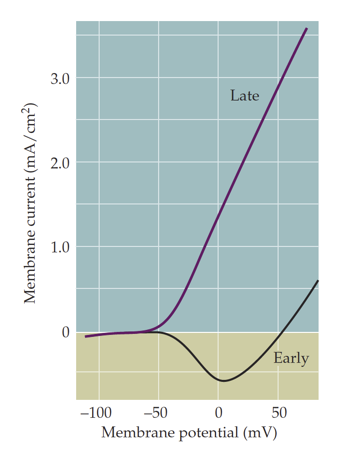 Caption: Relationship between current amplitude and membrane potential, taken from experiments such as the one shown in Figure 3.2. Whereas the late outward current increases steeply with increasing depolarization, the early inward current first increases in magnitude, but then decreases and reverses to outward current at about +55 mV (the sodium equilibrium potential). (After Hodgkin et al., 1952.)

Here we see the dependency of the currents (early: Sodium, late: Potassium) on membrane potential.

What I was wondering was this: It looks like the dependency of the Sodium current on the membrane potential is very non-linear. However, experiments which assess the amplitude of injected current on excitatory postsynaptic potentials (EPSP) state that the amplitude of EPSPs are proportional to the injected current. How is this consistent with the non-linear current/permeability changes of Sodium? Is the Sodium current linearly dependent on voltage (and vice versa) before the action potential threshold is reached?

This is a bit of a strange way to plot out these data, I think Figure 3.2 is easier to understand, but basically these are data plotted from early voltage-clamp experiments trying to walk you through how the Hodgkin-Huxley model was developed.

They step the voltage to a particular point and look at the current. There are two phases to this current: an early transient and a later plateau.

The shape of the "early" component ultimately results from the multiplication of two functions: the gating curve of the voltage-gated sodium channels and the reversal potential for sodium around 50 mV. If the voltage gated channels were simply open all the time, you would just have a straight line through +50mV, it would follow the right-side shape of the curve. The left-side of the curve is due to more channels opening as you depolarize more.

Your picture is a bit different from these traces plotted in time: figure 3.3 is showing the peak of each component as a function of the voltage step. I think it would be better to present 3.3 as a series of data points rather than a smooth curve to make this more obvious.

Note that the actual numbers here are a bit different than one would see in a mammalian cell, because these original experiments used the squid giant axon which has some differences in voltage dependence, gating, and ion concentrations.

The reason sodium and potassium can be seen separately in these voltage clamp experiments is because:

A) Sodium channels open really fast early on, and then inactivate

B) Therefore, in the long term the potassium current dominates the sodium current.

If you blocked the potassium current and VG sodium channels didn't inactivate, the "early" part would look like a mirror image of the "late" part of the voltage-clamp traces. As-is, the early component is mostly sodium but also includes some voltage-gated potassium current as well that cancels it out and makes it appear smaller than it would otherwise be.

If you look at the late curve in your original figure, it's mostly straight from the point that all the K channels are open. For the late component, the K permeability is at max by -30mV so after that it's all linear from driving force. The little curve at the bottom up to about -30mV is the range at which not all the K channels are open, otherwise it would be a completely straight line, and it would reverse at the K reversal potential instead of asymptoting around zero. But it's not exactly zero because there is also some leak which is mostly potassium, and that does reverse around the K reversal.

Not the answer you're looking for? Browse other questions tagged neuroscience action-potential neuron or ask your own question.

4
Action potential changes in low sodium concentrations but constant osmotic pressure
6
Relationship between nerves and axons
7
Is there a biological neuron that spikes in response to hyperpolarizing currents?
2
How does bath application of KCl depolarize a neuron?
0
Mathematical relationship between membrane conductance and conduction velocity?
2
Question about the threshold potential
1
Changes of permeability and driving force during voltage clamp
2
Help me understand voltage patch clamping
1
Connectivity Relation between axon terminal synapses and dendrites