Motion after-effect illusions, such as the waterfall illusion, refer to illusions where fixating a screen which shows stimuli moving in a particular direction elicits the perception of motion in the opposed direction when subsequently looking at a static image.

The explanation is typically that adaptation effects lead to a saturation of the firing rates of neurons encoding the viewed motion direction.

So far so good - but why do we then perceive afterwards motion in the opposite direction, and not in any other direction where no adaptation has happened?

The motion after-effect (MAE) is believed to be primarily due to adaptation of direction sensitive cells in the middle temporal area (MT) (Fig. 1.). The directional cells in this area of the cortex are selectively sensitive to motion in one direction. Hence, looking at a waterfall will selectively cause adaptation in those cells tuned to the direction of the waterfall. When one looks away, the MT cells responsive to opposite directions will become dominant, as their counterparts are momentarily shut down and one will see the waterfall running in opposite direction.

Adaptation thus apparently weakens the opponent input to the adapted MT cells, enabling an enhanced response to motion balanced stimuli. However, the possibility of adaptation occurring in MT neurons themselves cannot be ruled out (Mather et al., 2008).

The MT area is one of the principal visual cortical areas devoted to motion sensing and hence a likely culprit for MAE. However, fMRI studies have indicated that a lot more visual areas in the brain may be involved, either directly, or indirectly, including V1, V2, V3, VP, V3A, V4, and also MT (Mather et al., 2008). 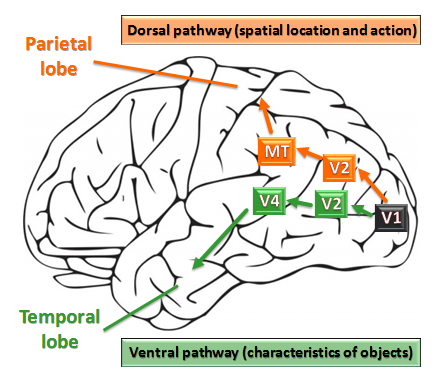 This is a more detailed answer about conceptual mechanisms from the same author as AliceD is citing:

The first row represents the sensors (for instance photoreceptors) while the second row represents higher order responses (for instance of MT neurons). The latter's response is their resting level response plus the difference of the corresponding channel minus the opponent channel's response (so yes, the assumption is that there is an opponent mechanism). As you can see, there is no response beyond baseline before adaptation as the difference between the sensor's responses is zero. During adaptation, when subjects are seeing an upward motion, the corresponding response is higher, too. 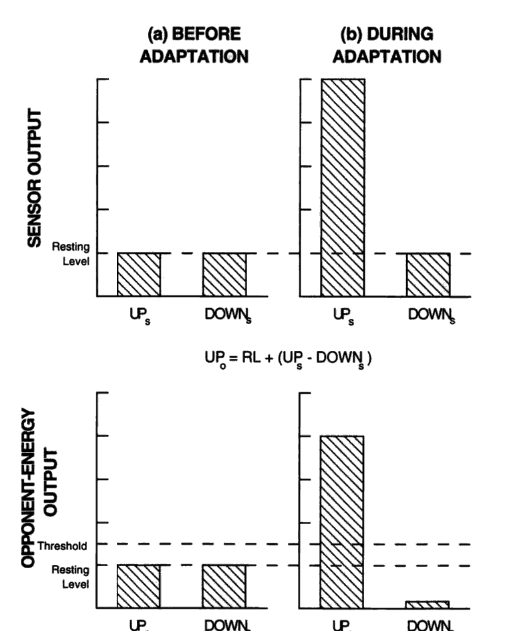 Now after adaptation, the opposed system shows an above baseline response as now the up sensors display some form of adaptation, hence shifting the response difference of the sensors in the favour of the opponent motion direction: 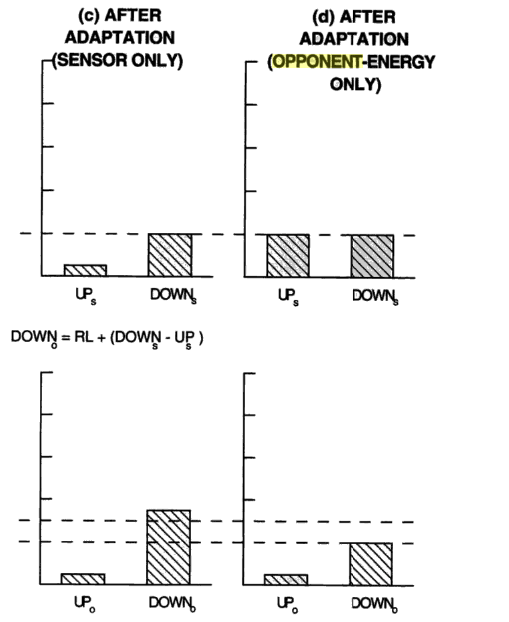 I am not familiar with the underlying biophysical mechanisms, this model possibly suggests, however, decreased feedforward inhibition after adaptation.

Not the answer you're looking for? Browse other questions tagged neuroscience vision sensation perception or ask your own question.

14
What portions of the brain have drastic changes in activation when we "sense" someone is there?
15
How does this illusion work?
12
Why does this illusion work?
7
Why are pilots under the illusion of gaining altitude without doing so?
5
Braquio-abduction illusion explanation and references
5
What's the frequency resolution of the human ear?
4
Why doesn't the ambient lighting condition change the perception of colors we see on a monitor?
6
Perception of white in the absence of rods
3
What is the essential benefit of center-surround organization of retinal ganglion cells?
1
Multiple numbers in the Ishihara test?