I've read that in the last decade (I believe) some scientists discovered a microorganism, which they dubbed bacillus strain 2-9-3, in a crystal of salt that they think is 250 million years old and that started replicating when put in favorable conditions.

Is this really an example of the longest surviving life form?

Could someone confirm this is true and scientifically validated and provide some info and references that can be understood by non specialists. I'm a telecommunications engineer so I can understand general scientific approach and I have a basic understanding of chemistry and biology, but no formal or specific training on the subject.

I was unaware of 2-9-3, but performed a simple internet search which brought up a an open-access paper from 2001 refuting the claim, and nothing more recent, suggesting that the refutation was valid. I mention this both to make it clear that although, like the poster, I am not an expert in the topic one can get considerable mileage through standard search techniques. (I do acknowledge that it does help if you know you can get access to papers through a University Library, open-access or not.)

The claim was actually made nearly two decades ago in a paper by Vreeland et al. in Nature 407, 897-900. The date is relevant because at that time full-length sequences of bacterial genomes were only just appearing.

The paper refuting the claim is entitled “The Permium Bacterium that Isn’t” by D.Graur and T.Pupko and was published in the journal, Molecular Biology and Evolution 18 1143–46 (2001).

The authors put forward various indirect arguments for doubting the claim but they based their refutation on sequence comparison between so-called Bacillus permeans (2-9-3) and other bacteria. The first argument was that the 99% similarity of B. permeans to a contemporary halophilic bacterium, previously known as Bacillus marismortui, subsequently renamed Salibacillus marismortui, implied a relatively recent divergence from the latter. To rebut the argument that S. marismortui had also been trapped in salt for millions of years until recently a comprehensive comparison with other bacteria was conducted resulting in the phylogenetic tree shown below which was incompatible with the bacterium having not evolved in the last 250 MYr: 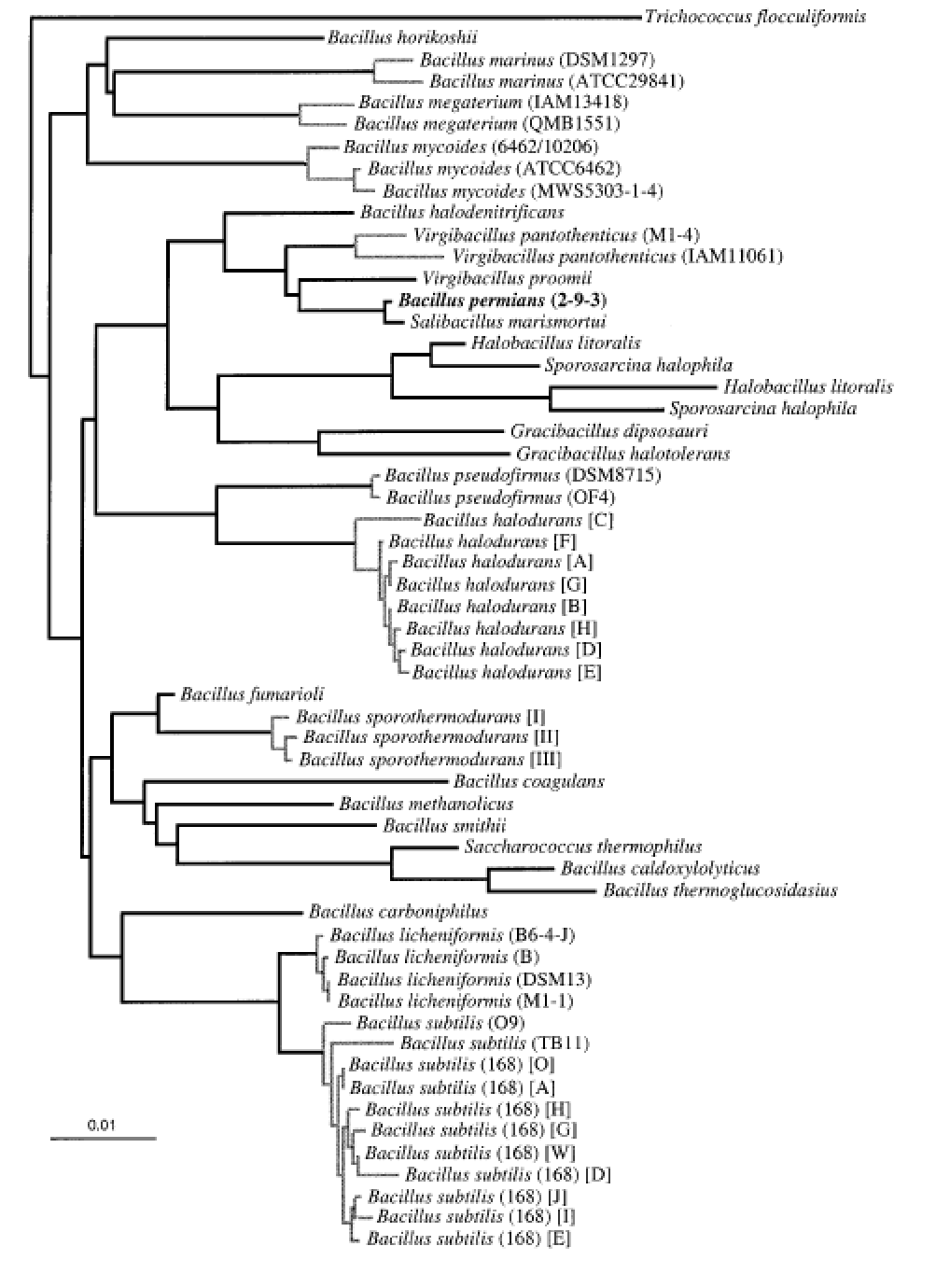 An independent analysis by Nickle et al. in Journal of Molecular Evolution 54, 134 (2002) came to a similar conclusion.

I am not expert enough to judge the methods of determining rates of evolution and relative distances between species, but it would appear that they are accepted by those in the field.

Not the answer you're looking for? Browse other questions tagged evolution microbiology bacteriology fossil or ask your own question.

7
Same 185th million grandfather?
1
What does NaOH do for the plating of Bacillus subtilis?
1
How is a bacterial strain defined?
1
Multiplication of bacillus subtilis
3
BLAST 16s rDNA: Everything alligns to Bacillus sp
1
Spores bacillus subtilis in milk
0
Are these 3.5B year old fossils the oldest on earth?