Why do death cap mushrooms not warn of their poison?

This has been puzzling me for a long time now. There is an evolutionary predilection for living things which have evolved strong defensive measures (that may not themselves be visible) to give distinct visual or audible warnings advertising these measures.

Wasps, hornets, snakes, and bees are all brightly coloured. Snakes may even have rattles to advertise their venom. These things by in large don't want to have to use their poison in a defensive capacity. Getting revenge on a predator who has mortally wounded you is a Pyrrhic victory.

These warnings are so potent that many animals without such measures will mimic these warnings in order to piggy pack on a general evolutionary bias towards an instinctive avoidance of anything that warns of being poisonous.

But take the death cap mushroom. 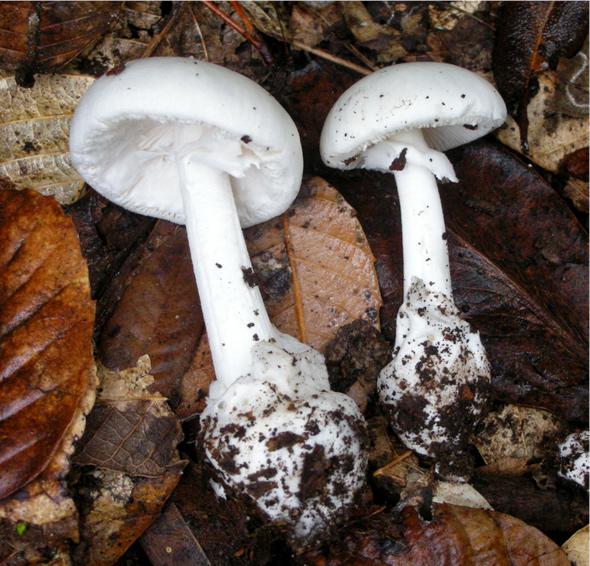 This innocuous fungus looks identical to completely harmless mushrooms. It has no foul smell. In fact, evidence shows that it actually has a pleasant taste! That picture above actually looks pretty tasty in my opinion.

This fungus has gone to the trouble of developing one of the most potent poisons in nature (humans have a seriously robust digestive systems by animal standards, and yet a single death cap can easily kill an adult human).

So why so secretive about its arsenal?

I know this same question about evolving poisons that are not well advertised could be applied to a large number of animals, insects, and particularly fungi, but I think the death cap is the most extreme example in both the lethality of the poison considered, and combined lack of advertising.

Most of this type of evolutionary question are generally worthless, IMHO. You can rationalize anything post hoc and then go away with the misapprehension that you have been involved in science.

To add a few of those possible post hoc explanations (which took longer to type out than think up):

1) The poison is only accidentally a poison. It serves some other function in the mushroom's metabolism. There are numerous possible examples of this. For instance, the stalks of rhubarb are edible, while the leaves are poison; potatos are edible unless they've turned green from exposure to sunlight...

2) The poison might not be directed at humans. The mushroom might have some warning that would be obvious to other species, for instance a smell or markings visible in UV (such as many flowers have). We have lots of examples of poisonous plants that we grow because they're attractive to us: datura, lily of the valley, foxglove, oleander, delphinium...

3) If I'm not mistaken, mushroom poisoning takes rather a long time to kill, which argues against it being a defense. The poison might have evolved as an aid to reproduction. Mushrooms are the fruiting body of the fungus. If an animal eats it, it consumes the spores. If it dies hours or days later, it has transported those spores to a distant location, and the corpse provides nutrition for the new fungi.

Doesn’t the all-white toadstool look distinctive and memorable to you? It doesn’t look remotely like the field mushrooms or other edible mushrooms I would collect. What edible fungus would you confuse it with?

Not the answer you're looking for? Browse other questions tagged evolution mycology poison or ask your own question.

92
Why do some bad traits evolve, and good ones don't?

8
Why is dimethyltryptamine (DMT) being released during death?
3
Why do farts stink, but perfume does not?
19
Why did humans lose their fur?
16
Why do mushrooms grow in rings (sometimes called "Fairy Rings")?
3
Where do mushrooms get their energy from?
3
Why do plants not have fat cells, and store their reserves in vacuoles instead?