So I share a house, and my other housemates are currently away. One of them had some "plain" bread (a popular type in Scotland), complained a piece had mould on it, and so I had assumed they'd thrown the rest away before they left.

So you can imagine my bemusement when I decided I wanted some toast, opened the bread bin and was greeted by this: 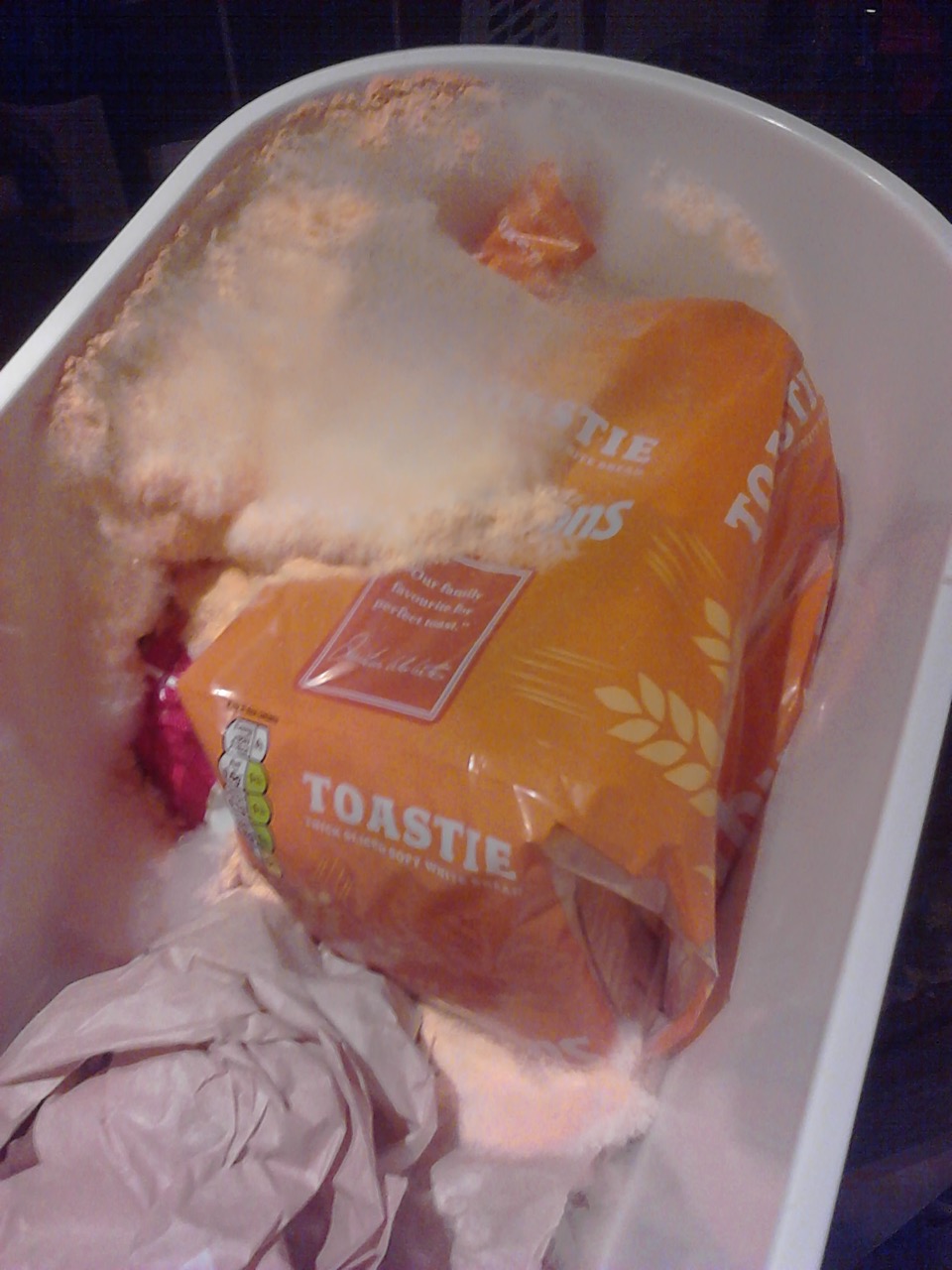 You can just about see where my housemate's bread was, in the red packet on the left under the mass of orange and fuzz. The loaf in front was unopened, but the packaging was just so covered in this stuff I had to throw it away.

Now I didn't think to take any more pictures, as my priority was getting rid of this, on which I may have gone overboard (if I'd had a flamethrower I'd have used it) so there's no trace left. I only became curious later, but looking around on articles about bread mould I haven't found anything whose description seems to match what I'm seeing; in fact most are just describing the usual blue/grey mouldy patches seen on the bread itself, and none of the pictures I've found show anything that looks like this, the worst showed a piece of bread entirely blue/grey with a few millimetres of fuzz on it. Articles on orange mould seemed focused on the type that can appear on grout and such, and wasn't immediately identifiable as being the same thing.

The fuzzy parts appeared fine like concentrated spiderwebs, while the orange stuff was somewhat rubbery, or at least the bits left stuck to the plastic bread bin after I got rid of the worst of it. Also of note is that there was a lot of something, presumably spores, when I opened the bread bin, or maybe just the spider-web like stuff disintegrating; fortunately I wasn't breathing in at the time. This stuff has grown quickly as well, though I expect the mouldy bread must have been bad when my housemates left, this orange/fuzzy stuff has exploded out over only about two or three days.

Anyway, I'm curious, is this just some normal progression of the common penicillium variety, or is it something else? Is the orange the natural colour, or has it leached colour from the wasted loaf's packaging?

Apologies for being a bit imprecise, my scientific background is in computers, and the scientist part of my degree really just means I'm a programer. 😏

9
Bee (?) identification
3
Identifying a spider from my childhood memory
5
Identification of black growth on onion skin
3
What kind of beetle has fuzzy orange antennae and can flip its head down for digging?
2
Identify the fluff that I have found in tea
2
What kind of spider is this? First time I have ever seen one
17
Identify this giant green moth(?) with great taste?
6
What is this yellow sticky excretion from a moth? Details in photos