Why does oxygen bind to hemoglobin in an specific angle?

There is an specific angle of the bond between oxygen and hemoglobin in lungs, which I don't know, but what interests me more is the question, why is it specific?

summary: O2 could form a linear complex with the Fe atom, but then it would start to look more like a mineral Fe=O...O bond - a linear bond would be like a transition state to an iron oxide (rust). An Fe-O-O bent bond preserves more of the electronic character of the O2 molecule and promotes strong but reversible binding to Hemoglobin. 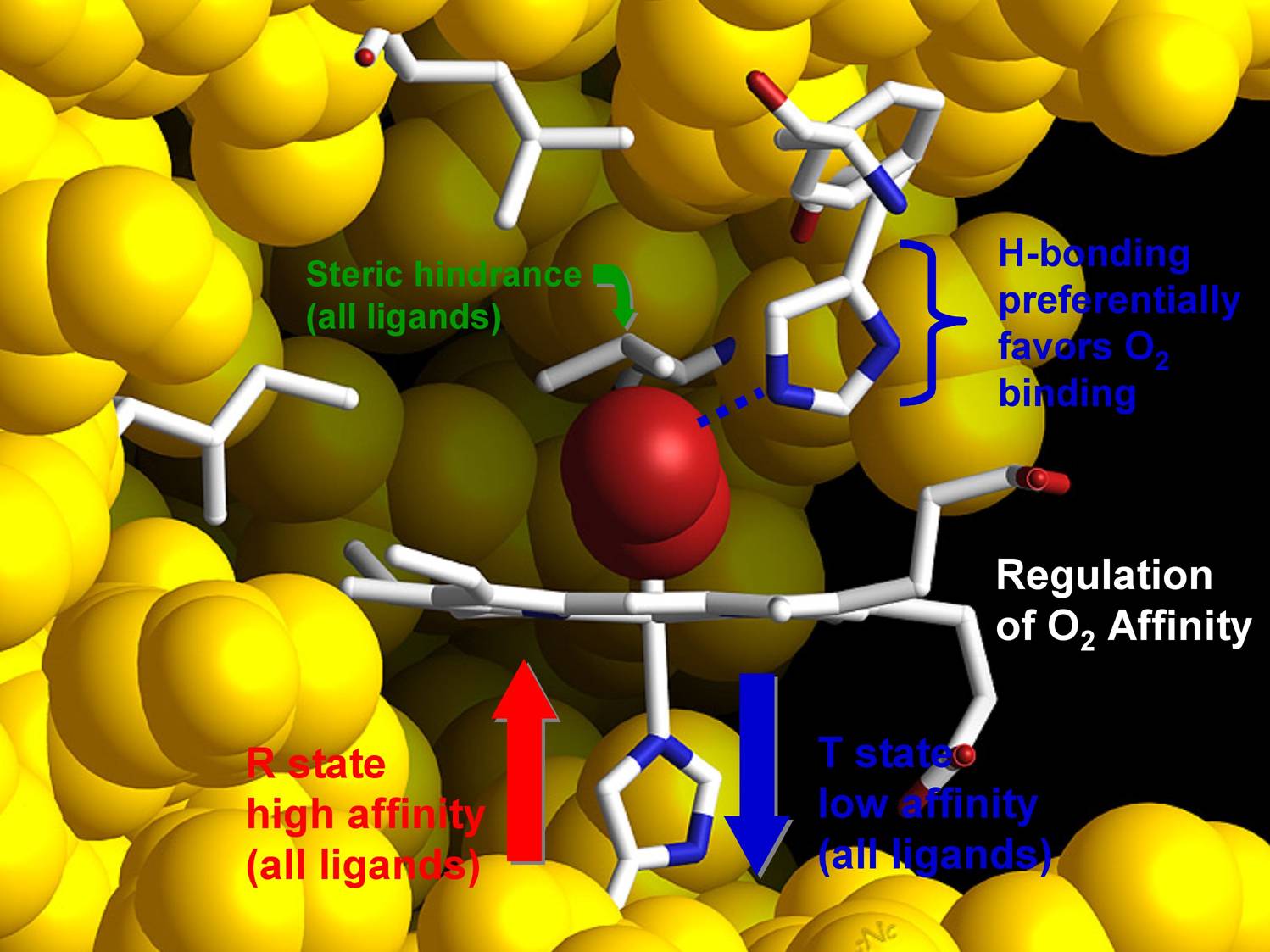 ). The lone pair of electrons of the oxygen atom which forms the bond to the iron has a 120 degree angle with respect to the oxygen molecule itself. In chemistry we say it is sp2 hybridized. This implies a slightly greater than 120 degree angle between the Fe-O and the O-O axis would be energetically preferred in oxygen binding.

You can see on the other end of the oxygen, there is a histidine sidechain nitrogen which interacts in a similar way - crooked at a similar angle to the oxygen molecule.

As @MattDMo points out in the comments, it would not be 120 degrees exactly in fact even freshman chemistry molecular orbital theory would say that the double bond would take up more 'space' than the sp2 orbitals, widening out the angle Fe-O=O angle to be greater than 120 degrees. Then the protein has its own geometry - the histidine and the heme iron are fixed in space and probably have their own location, so this is just an approximate, qualitative bond angle..

The claims of superoxide formation is because the oxygen is diamagnetic the iron and he oxygen, which are both paramagnetic, somehow pair to eliminate their magnetic moment. The PNAS paper cited here goes in depth on this issue. The article curiously just says the highly reactive superoxide is kept from being chemically consumed by the hydrophobic pocket around it.

The oxygen almost makes a superoxygen the iron sort of oxidizes but doesn't quite. Its also due to the peroxide like character of the oxygen molecule, partially bonded at both ends.

Still the point is that hemoglobin holds onto the oxygen by making a partial covalent bond. After all when the O2 unbinds, its just O2 again. A later study does detect some paramagnetism at low temperatures. In the last word on this that I could find, Pauling does a review and concludes that the electronic state of the heme iron and oxygen complex is a combination of three different electronic states - partly superoxygen, partly oxy-iron and molecular oxygen.

The reference also gives the Fe-O-O angle as 117 degrees.

[Just a note that the reference page I got the picture from refers to rational design of the hemoglobin molecule...in this case they are engineers talking about how they could change the amino acids in the protein to get other properties out of the hemoglobin system - rationally.]

3
How much does donating blood affect the amount of oxygen in your blood stream at high altitude?
2
Why does the affinity of haemoglobin for oxygen increase at higher elevations?
1
Carbon Monoxide and High-Oxygen-Affinity Varieties of Hemoglobin
29
Why do we need red blood cells?
4
How many cell membranes are oxygen and carbon dioxide diffuse through in the lungs?
6
Hemoglobin oxygen affinity curve
2
How does one experimentally obtain a hemoglobin-oxygen dissociation curve?
4
What happens with the nitrogen in blood in membrane oxygenators?