Why is it thought that protein folding is determined solely by amino acid sequence?

It seems that it is a generally accepted idea that protein folding is completely determined by the sequence of amino acids, but why do people believe that? Is it simply that no example of a protein with two different functional foldings (possibly with different functions) is known, or is there some theoretical reason that it would be impossible for such a protein to exist?

This question is, in my opinion, based on an incorrect premise but nevertheless throws up a number of points about protein folding and protein structure that can be addressed, albeit briefly.

What is thought to determine protein folding?

The basic principle thought to be the main determinant in protein folding is thermodynamic. If possible†:

Thus, the protein itself is a major contributor — but not the sole contributor.

There is no argument that amino acid sequence (and composition) will be an important determinant of the contribution of the protein to the thermodynamically most favourable state, as the chemistry of the amino acid residues determine how it can interact chemically with its environment (albeit with weak interactions) and how it may interact with itself to produce a conformation which may have an appropriate effect on the entropy of the whole system.

So this is viewpoint is based primarily on chemical thermodynamic assumptions, rather than special ideas of molecular biology. An elementary exposition of this idea can be found in Berg et al. Section 1.3.4.

How can the environment affect protein folding?

Another influence on the folding of a polypeptide chain may be the presence of another polypeptide chain with which it can interact, as in the case of the alpha and beta subunits of haemoglobin (see the classic paper by Perutz (1970))

Small molecules can influence the structure of a protein such as in the case of 2,3-diphosphoglycerate (2,3-BPG) on haemoglobin mentioned below.

When a protein is synthesized in an environment unconducive to correct folding it may require a chaperone protein to transport it to an appropriate environment.

And if the final structure of a protein requires covalent linkages, e.g. between the SH groups of cysteine residues, an enzyme is need to oxidize them.

What evidence do we have for this?

We have evidence that some proteins that have been unfolded by putting them in environment that is thermodynamically unfavourable to their native (end enzymatically active) structure can refold when the environment is slowly returned to one that is favourable. This is the famous Anfinsen experiment with ribonuclease (described in this book section). Important as this experiment was in supporting the thermodynamic idea and showing that the contribution of the protein was inherent in its own composition, it does not prove that this is what happens in vivo, nor that the structure formed is the one with the lowest thermodynamic free energy.

The importance of individual amino acids in the sequence is attested by examples such as the mutation of a single amino acid in beta-globin in sickle-cell anaemia (glutamic acid to valine). Under certain circumstances this allows the haemoglobin molecules to polymerize into long fibres because of the interaction of the hydrophobic valine residues with residues in another subunit rather than with water.

Different states of folding are possible in a single protein

This addresses the section of the question regarding a possible:

…example of a protein with two different functional foldings

There are many so-called allosteric proteins that are regulated by interaction with small molecules (their environment) which cause a shift from one conformation to another. The example par excellence is haemoglobin, which is in an equilibrium between two states that are influence by the binding of oxygen, hydrogen ions (i.e. the acidity of the blood) and 2,3-BPG.

Another type of example is the shift that can occur between the secondary structures producing amyloid proteins.

†Can we be sure that a protein always adopts the structure of the lowest energy?

The manner in which a random coil is a highly complex field, but, in brief, one can imagine that the path to the structure of lowest energy is blocked in some way (an energy barrier that would have to be overcome, perhaps) so that the structure adopted is, instead, the lowest attainable in practice. 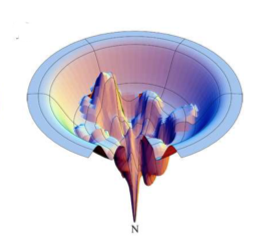 [A rugged energy landscape with hills, traps and energy barriers and some narrow throughway paths to native — from Dill & Chan, 1997]

Not the answer you're looking for? Browse other questions tagged molecular-biology protein-folding or ask your own question.

5
Effect of 2,3-bisphophoglycerate (2,3-BPG) on haemoglobin

4
Are There Rules for How Proteins Are Formed?
1
How to predict Protein-Protein Interactions from a pair of gene symbols?
1
How do PrP mutations lead to prion disease?
4
Why are dietary recommendations for methionine consumption combined with cysteine?
5
Why does protein folding not depend on the order in which it is synthesized?
2
How does the shape of a protein determine its function?