Are there examples of animals being sexually attracted to another species more than to their own?

I just thought that from the perspective of a female domestic cat, a male bobcat probably looks like the archetype of a perfect mate. As tall, strong, muscular and mighty as it possibly gets. Clearly preferable to any of these boring male domestics.

Has anyone ever done any research on this topic, like presenting a male cat and bobcat to a female in heat and scientifically evaluating her response? (I'm not exclusively asking for cats and bobcats, but for any type of animal, and I'm just using the cat-bobcat-example to better explain the question.)

Here are a few examples. All are open to debate as to whether it answers your question.

When asking of example of a "species" that does something, it is easy to forget about the diversity of behaviours among individuals of that species. It raises the question of how frequent must the behaviour be in that species to accept that the species is representative of this specific behaviour. Many might be tempted to disregard humans as examples thinking that zoophilia (sexual fixation of a human on non-human animals) is very rare but the reality appears quite different.

Given the prevalence of zoophilia, I would argue that humans could be considered an example of a species where (some) individuals are sexually attracted to individuals of another species.

Many animals have sex with about anything 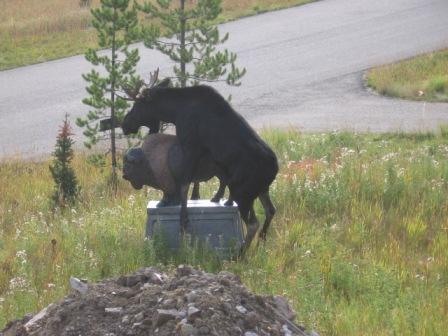 Note btw that I am talking here about animal species that have a very high cognition, so below is a funny example with a beetle.

In Australia, a species of Buprestidae (family of beetles) called Julodimorpha bakewelli has gone through an important decrease in population size. The blame is on people throwing their empty bottles of beers on the side of the road. Why? Males are attracted by the brown shiny color of the females and it turns out that many glass beer bottles have this same exact color. Hence, males started to spend all their time mating with beer bottles rather than with females causing a decrease in the species population size.

Sure a beer bottle in not another species but it shows how individuals of a species can be more aroused by something else than individuals of its own species (and the example is funny; the study won the IgNobel prize in 2011).

The Amazon molly is a fish species in which there is no males. All Amazon mollies are females. However, the amazon mollies need sperm to reproduce. How is it possible?

The females have to seek for sperm in a sister species in order to activate the development of the eggs. They mate with males of this sister species but don't use the genetic material of the father from the sister species (otherwise they would not be two different species). The amazon mollies are therefore only sexually aroused by individuals of another species. See Kokko et al. (2008).

Not the answer you're looking for? Browse other questions tagged evolution sexual-selection or ask your own question.

9
Why is the Kakapo more attracted to humans than its own kind?
4
Sexual selection in cats or other animals
3
Are there examples of selection on males influencing female phenotypes?
12
Are there lifeforms that have more than 2 sexes?