Were there any vertebrates with 6 or more limbs?

My question is actually a bit more broad than what's in the title, but I don't know how to put it succinctly. When I was trying to find the answer to that question, I found that all known terrestrial vertebrates are ultimately descended from a species of lobe-finned fish that had 2 sets of bilaterally symmetric fins (which excludes the dorsal and ventral fins), which were the basis for the limbs of its tetrapodal descendants.

The best way I can think of to phrase the question is: Does paleontology has any evidence of a vertebrate that had 3 (or more) sets of bilaterally symmetric limbs or lobe-based fins? I'd like the focus to stay away from ray-finned fish, even though they're vertebrates and related.

This is not the common question, which is whether there is or can be a mammal/reptile species with more than four limbs. The essence of that question's answer is that mammals and reptiles both evolved from a common ancestor species that were tetrapods, and that it's extremely difficult to change the genetic floor plan in the necessary way without causing fatal problems (along with other evolutionary issues). By and large, this common question is so common that it chokes out the type of question that I have, making my amateur attempts at further research difficult to impossible.

I've not read it but this SE question Why don't mammals have more than 4 limbs? though not a duplicate (it asks about mammals not all vertebrates) may have some elements in its answers pertinent to your question.

And the question Why are there no vertebrates with more than four limbs? has been asked in Quora where it has 7 answers you may find useful.

Also this discussion thread Why can insects have 6+ limbs, but mammals only have 4? in reddit.

Does paleontology has any evidence of a vertebrate that had 3 (or more) sets of bilaterally symmetric limbs or lobe-based fins?

You sent me far down the rabbit hole with this one, for reasons that escape me my instant response was 'yes the Coelacanth' but as you correctly point out that has only 4 paired fins.

As seen from The origin of tetrapods our limbs came from fins, Coelacanth is a good example of the likely early beginnings of Tetrapod limbs, they occasionally use them to 'walk' on the seabed.

The image provided in this National Geographic article Coelacanth Rediscovered gives a much clearer picture of it's 'limb' structures. 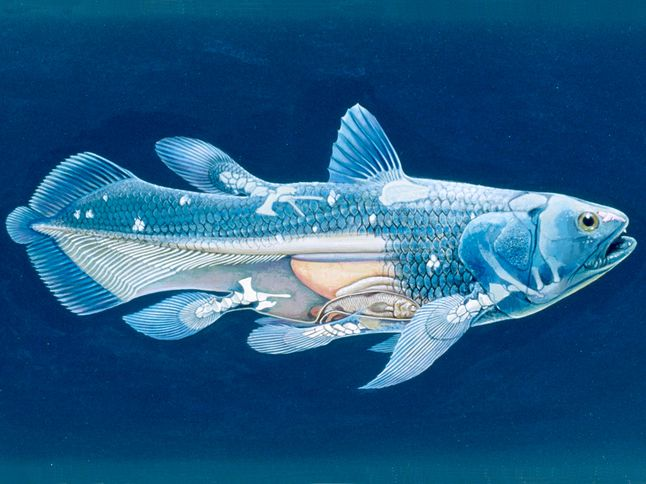 Latimeria chalumnae, the coelacanth (SEE-lee-uh-kanth), thought extinct until a biologist identified one off the coast of South Africa in 1939.

I've trawled Google for early chordates looking for examples of more than two pairs of fins & haven't been able to find any, it seems the earliest paired fins appeared in (or shortly before) Ostracoderms & from there continued in an unbroken line to the tetrapods & our limbs.

Paired fins don't appear to have developed in chordates before then or to have ever developed into more than two pairs.

So to the best of my knowledge it appears that the answer to your question is no.

Not the answer you're looking for? Browse other questions tagged evolution palaeontology or ask your own question.

62
Why don't mammals have more than 4 limbs?

13
Are there any pre-Holocene venomous animals?
31
Were there any flying dinosaurs?
62
Why don't mammals have more than 4 limbs?
5
Is there an ideal evolutionary body?
8
Were there any marine/aquatic dinosaurs?
1
Are there any known plesiomorphies of all living mammals relative to a newer trait state in all living reptiles?
5
Why did we lose our fourth type of cone cell (in the eye)?
2
Which fish did modern tetrapods descend from?