To me, the phenomenon of polymorphism in cnidarians is particularly troubling. I gather that it essentially refers to existence of various different forms or kinds of individuals, i.e. zooids and polyps in one species. But when we refer to the cnidarian Physalia, as an animal, aren't we actually referring to a colony of individuals? Physalia consists of several "entities" including gastrozooids, dactylozooids, and the float, and since each of these is a distinct "organism", therefore is what we refer to by saying Physalia is actually a colony of phenotypically distinct forms of the same species?

Therefore, can "animals" like Physalia or Gorgonia or Pennatula be thought of actually as "colony-beings" which always contain several individuals in group?

It seems like your question might contain two separate and linked issues, both of which are perhaps equally confusing and equally interesting. They're both really discussion questions in a sense, but they've also both been dealt with in the literature in thoughtful ways, so here's a stab at an "answer".

Issue One: how does your species concept deal with polymorphism?

Various papers by Kevin de Queiroz deal very well with species concepts. In 'The General Lineage Concept of Species' (which is also summarized on this page), he argues that although there are many different species concepts that can be better applied to different situations, they all share the basic tenet of defining a "segment of a population-level lineage". In other words, each concept is attempting to put a continuum into slightly different categorical bins, but they all recognize the existence of the same continuum (the lineage). (Also see his 'Species Concepts and Species Delimitation'.)

I think most species concepts have no trouble dealing with polymorphism because the different morphs are all part of the same lineage, that is, "a series of entities forming a single line of direct ancestry and descent" (de Queiroz 1999).

Issue Two: how does your concept of the individual organism deal with colonialism?

In 'Does Biology Need an Organism Concept?' Pepper and Herron make a similar point to that of de Queiroz. They argue that multiple definitions (concepts) exist, and that these concepts all attempt to categorically bin what is in fact a continuum. Like de Quieroz, they argue that most definitions recognize the same underlying continuum, and that the difference is in the categorical bins.

In the case of the organism concept, this continuum is based on two criteria: increasing genetic homogeneity, and increasing physiological integration.

So, for instance you could have two organism concepts (in the picture below, lighter yellow and darker yellow) that agree that Physalia falls in the same location along these axes, but disagree on exactly where to draw the boundary between their "multiple organisms / colony" zone (yellow), and their "individual organism" zone (white). 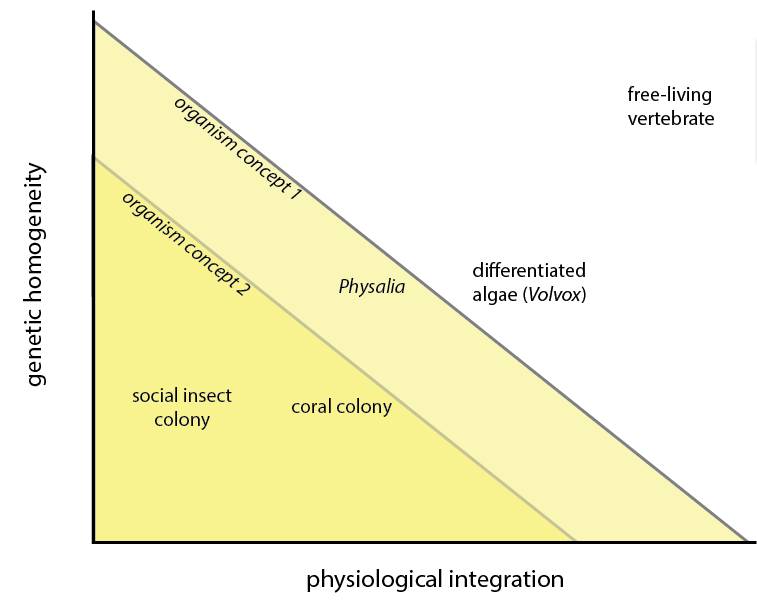 I'll finally get to my point, paraphrasing both de Queiroz and Pepper and Herron. For both concepts of the species and of the organism, arguing about whether one concept is better than another is endless (especially on a site that aims at answers rather than discussion). However, recognizing that there are different concepts, understanding that what these concepts do is to bin the same continuum in different ways, and being clear about which concept you decide to use is very useful.

The easiest way to understand this, in my opinion, is to think in social insects. In the ants, for example, there are polymorphisms, since the workers don't have the same phenotype as the queen or the soldiers. Also, one could argue that the whole colony is a massive metaorganism or superorganism, formed by the summation of all the individual ants.

As in an ant colony, in the case of Physalia, each one of the zooids have a fully formed body (cnidarians have a distinct body plan, consisting of a sac-like digestive system with a mouth crowned by tentacles, two embriologycal layers, etc.) and thus each zooid should be considered to be different individuals. In Physalia, the zooids are physically attached, but that's no different than siamese twins, who aren't usually considered to be only one organism.

While refering to an animal say Physalia, we refer to its massive type colony, containing many zooids. Among the zooids, a large cup shaped float is seen, which is bright blue in color and remains above sea water normally. On the undersurface of float many gastroaooids, gonozooids and dactylozooids are present. The colony thus shows a high degree of polymorphism. This is all I know and thus the reasoning seems to be absolutely correct...

Not the answer you're looking for? Browse other questions tagged zoology taxonomy nomenclature sociality definitions or ask your own question.

12
Why is Portuguese man o' war considered a colony?
4
What is an organism?
1
What does dominant generation mean

8
Does the word "polymorphism" refer to the gene, the phenotype, or both?
1
How do scientists decide which version of a polymorphism is the main one?
2
Cnidarian life cycle, a case of ontogenetic polymorphism?