How do viroids propagate to other hosts?

As viroids are simply non-encapsidated non-coding RNA molecules, it is difficult to imagine a mechanism for their continual infection, other than horizontal transfer which doesn't seem to be the case.

Is there a working theory on how viroids propagate and continually infect hosts?

Viroids are commonly thought of as remnants from the "RNA world" since they are composed of only RNA and have ribozyme activity. Viroids can be considered as plant parasites of the transcriptional machinery of the organelles (nucleus or chloroplast), since they are non-coding and they replicate by RNA–RNA transcription (in a rolling cycle mode).

Viroids infect the epidermis of their hosts after mechanical damage of the plant cell wall. After entry to the first cell layers, viroids initiate replication in the nucleus or in the chloroplast and then are transported to neighbouring cells, reaching the vascular tissues and virtually all plant tissues. 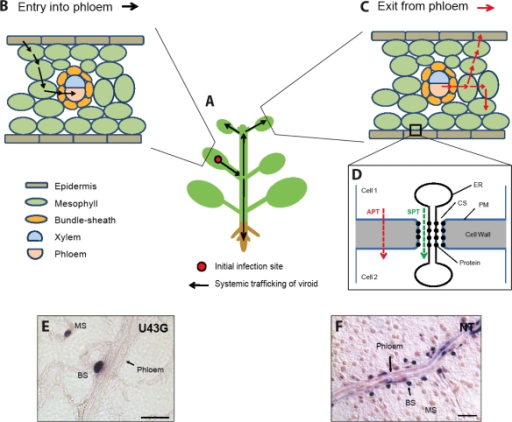 The transmission of viroids is both "natural" and human-driven. Viroids are mostly transmitted via mechanical methods by contaminated machinery and tools, pruning, and other mechanic argricultural techniques. Transmission also occurs through infected seed and pollen, they don't have important natural vectors from the animal kingdom. Also contact between adjacent plants can be another (inefficient) way to transmit viriods.

I have found a reference here for further informations. It isn't open access but it is possible to watch an abundant Google preview.

Not the answer you're looking for? Browse other questions tagged molecular-biology virology infection or ask your own question.

0
How does cold water help to overcome high fever?
5
Can an influenza virus carry other infectors with it?
1
Transposons, Viruses and RNA interference
1
Do viruses compete with each other or even infect each other? (Virus vs Virus)
7
If rabies always kills its hosts, must there be some animal that is an asymptomatic carrier?
1
Do DNA viroids exist?
7
Why can human viruses that can't infect chickens be grown in embryonic chicken cells?