Can anyone please identify this ant?

In case it helps, 3 attempts of using Ortho Ant Bgon Max gel and bait has not helped. They 2 were administered 2 weeks apart. Apparently, it's basically borax and sugar water.

A respondent at this DIY Stack Exchange page referred me to "Ant Identification Keys" section at this site. It seems that it may be a 2-node Big-Headed Ant, but it's hard to be sure. 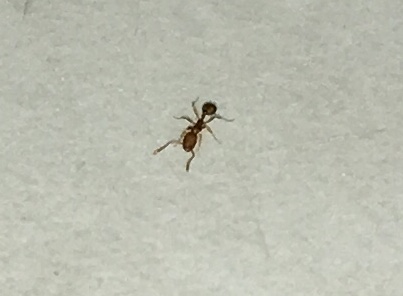 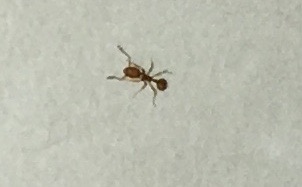 Location: Ottawa, Ontario (Canada); latitude 45 degrees north. It's an urban centre, and my highrise is by a main city street, but also with a creek on one side. I first noticed the ants in the kitchen in July, at the height of our summer heat, or perhaps at the tail end of it. I'm rent a 1-bedroom apartment on the 9th floor, facing the creek side and the major street.

Of possible relevance: The neighbour on my kitchen side says that he has never seen an ant. My unit is quite clean, with the only exception that I generate so little garbage that I change it infrequently. I spray inside with alcohol several times a day so that I'm not ravishing the environment by changing bags frequently. Most of the content are fruit/veggy peels/cuttings (no meats/fats or starch), and mostly oranges, which ants apparently hate. I've recently sprayed and wiped down the garbage in order to not use it until I've solved my ant problem.

Since paying close attention, I notice the ants on the floor and upper cupboards, whereas I only saw them before when they crossed the counter. Back then, I thought the ants were attracted to water from a leak that I found under the kitchen sink, or the dampened particle board due to water seeping from the rim of the sink. The latter would suggest carpenter ants, which like sweet things, like the borax/sugar mix that my store-bought baits were apparently based on. However, the 2.5mm size of my foraging ants are much smaller than the 6-25mm described by this local federal government site. My ants' 3/32" is also much smaller than the 6/32"+ C. sayi carpenter ant described here.

The leak has been repaired for about 2 months, and I've taken care to wipe up around the sink. No apparent relief from the ants, and the bait is mostly untouched. I'm wondering if the ants may be coming from elsewhere. Upon reflection, however, I do recall seeing what might bhe the calling card of carpenter ants for years -- fine wood chips under some of the bottom hinges of the cabinet and cupboard doors in the kitchen. It literally took years for them to accumulate to the point of noticability. Maybe carpenter ants been visiting for years, and only this summer decided to move in.

According to the pest control expert, the ants are likely pharaoh ants. It matches the description on the Wikipedia page in all respects:

He is treating the problem in my unit and a neighbour's unit using Maxforce Quantum. It could take some time :( .

This is not conducive to a fitness regime of pushups, situps, leg lifts, and side planks (all on the ground, of course). It doesn't help that my apartment largely has wall-to-wall carpeting coloured with a brown and white texture. Spraying down the vicinity with vinegar is unlikely to help, as the ants have clearly demonstrated a lack of repulsion from vinegar droplets.

Not the answer you're looking for? Browse other questions tagged species-identification entomology ant pest-control or ask your own question.